Outlander‘s Season 4 finale ended on quite the cliffhanger… though it wasna always so.

In the version that played out Sunday on Starz, a bunch of Redcoats arrive at Jocasta’s River Run plantation with a proclamation for Jamie: Gather and lead a militia to do Governor Tryon’s bidding. First order of business? Deal with a Regulator rabble rouser.

“You’ve got to find Murtagh, hunt him down and kill him,” executive producer Toni Graphia says, noting that in Diana Gabaldon’s Drums of Autumn, Murtagh is long gone by this point in the narrative. “That makes it more personal to Jamie, to have to hunt his own godfather.”

But Graphia adds that an earlier version of the story outline didn’t end that way at all. Read on to find out how things changed and to hear the EP’s answers to a few more finale-related queries. (Up for a Gathering, anyone?) 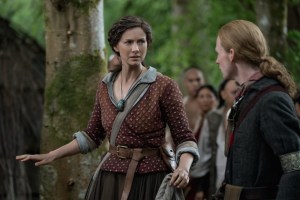 WHY DID THE SHOW SEPARATE FATHER ALEXANDRE’S DEATH AND THE FRASERS’ VISIT TO THE CAMP? | The short answer? “It was mainly an attempt to simplify those last chapters in the book,” Graphia says. The EP points out that some of what happens during Roger’s time at the camp takes place off-screen, for lack of a better term. The death of Father Ferigault and his love, for instance, “is a story that is relayed by Jamie and Claire to Roger,” Graphia notes, as is Ian’s trading himself to the Mohawk. “On TV, if we had Ian come and go, ‘Hey guess what? I traded myself to the Mohawks,’ it wouldn’t work. So, to play that out on screen, we had to distill things down.”

IS MURTAGH OFFICIALLY THE NEW DUNCAN INNES? | In the books, there’s a character named Duncan Innes who is one of Jamie’s fellow prisoners at Ardsmuir and who winds up accompanying the Frasers to the Colonies. [BOOK SPOILER ALERT] He winds up marrying Jocasta in Book 5, The Fiery Cross. Given that Murtagh doesn’t survive Culloden in the novels, and that the show hasn’t yet introduced Duncan, might the Jocasta-Murtagh hookup we witness in the season finale be evidence that the series is giving Murtagh Duncan’s storyline? “That wasn’t the way the storyline was intended, as a replacement for anyone,” Graphia says. “That would be unfair to the character of Murtagh.” 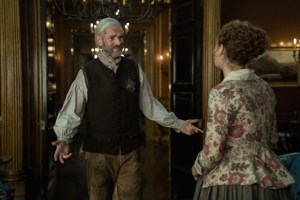 WHO, EXACTLY, IS THE ‘MAN OF WORTH’ IN THE EPISODE’S TITLE? | That one’s easy: just about every male character in the hour, from Ian taking Roger’s place with the Mohawk to Murtagh standing in as Jamie’s surrogate while Brianna labors at River Run. “Everyone’s on some rescue mission, and we wanted to follow more their emotional arcs than the plot arcs,” Graphia says.

WAS ROGER ALWAYS GOING TO COME BACK TO BRIANNA? | Yes, but not necessarily by the end of the season, Graphia says. In one iteration of her outline for the episode, Jamie’s militia mandate wasn’t there, so Roger’s whereabouts provided the hour’s ambiguous ending. “We’re like, OK… let’s do a real cliffhanger. Let’s have them come back without Roger, and let’s have Brianna say, ‘Where’s Roger?,’ and cut to black,” she recalls. “Then the more we thought about it, Droughtlander tends to be long, and we didn’t want to leave people that long wondering was Roger really that much of a jerk that he wasn’t going to come back to her.” She laughs. “Roger had been through so much this season, and Brianna too, that we wanted them to have some happiness.”

WILL WE SEE THE GATHERING IN SEASON 5? | Gabaldon’s Drums of Autumn ends with the extended Fraser clan attending a gathering of Highlanders in North Carolina. The event extends into the beginning of The Fiery Cross, as well. So, where is it? “I will be killed if I talk about Season 5,” Graphia jokes. “But let’s say that things that we don’t have room for in one season, we do try to find places for down the road. So it’s possible that we’ll see some of that.”