Before Dancing With the Stars kicked off its 28th season, ABC had hinted that some “format tweaks” were coming down the pike — and many a viewer breathed a sigh of relief.

The tweaks would have been a welcome addition to any cycle, really: After 14 years on the air, DWTS needed a little tune-up, controversy notwithstanding. But the changes seemed especially necessary in the wake of Bobby Bones’ Season 27 victory, which left a large swath of the show’s fans annoyed that a weak dancer had won the Mirrorball trophy, while some frontrunners didn’t even reach the finale.

And yet, now that we’ve bid adieu to Season 28 — perhaps an even more polarizing cycle than the one that preceded it — it’s time to call a spade a spade: Dancing’s new format failed to fix the show’s problems.

I’m specifically referencing the new judges’ save, which allowed Len Goodman, Carrie Ann Inaba and Bruno Tonioli to choose which of the bottom two couples would go home each week. Shocking eliminations have happened on DWTS for years, but the judges’ save seemed designed to prevent that, allowing them to protect a strong duo that would otherwise go home prematurely.

But when the show introduced this twist, it was assuming that the weakest dancers would also get the least votes from America, paving the way for piece-of-cake decisions from the judges. And that didn’t happen. Instead, we got the baffling success of ex-White House press secretary Sean Spicer, who got enough votes to snag sixth place (!) despite no visible improvement week over week. 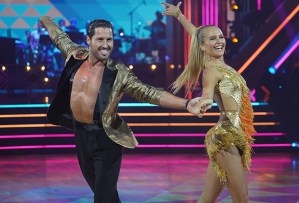 It’s no secret that DWTS is often a popularity contest, rewarding well-liked contestants (or contestants who are giving it the ol’ college try) over those who dance well. But I’m still of the opinion that it shouldn’t be — and I’m not alone in that. In a recent TVLine poll, 44 percent of readers said they typically vote for the best and/or highest-scored dancers, while 22 percent typically show support for those who are improving each week. Only 11 percent said they vote for the most likable contestants, regardless of their skill, while 16 percent tend to rally behind the celebrity they already recognized.

Plus, the show also seems to want the strongest dancers to win. Anytime a frontrunner goes home too soon — like Season 28 hopefuls Sailor Brinkley-Cook or Kate Flannery — the judges find it “frustrating.” Hosts Tom Bergeron and Erin Andrews are stunned. The studio audience boos! And if the show didn’t value talent over popularity, why introduce the judges’ save at all? Why not just let the home audience call the shots?

But if the show really wants to keep the best dancers, the judges’ save isn’t enough — not when a weak contestant like Spicer can still get by on America’s votes, though he’s hardly the only amateur to survive on fan support alone. If the show is renewed for Season 29, perhaps the judges’ scores need to make up a bigger fraction of the final results. Or, at the risk of getting lambasted by the studio audience, the judges may simply need to score dancers more harshly if they’re not improving. (After all, there’s no world in which Spicer ever deserved sevens, is there?)

DWTS certainly gets kudos for trying something new; the judges’ save was an exciting addition to Season 28, even when it didn’t have the desired effect. But if the show truly wants to reward the best of the best (and it seems to want that!), a bigger and bolder change needs to step into the spotlight.