Season 27 of Dancing With the Stars came to a close last Monday with three very surprising words: “Bobby and Sharna!”

Indeed, against all odds (including middling scores from the judges), country radio DJ Bobby Bones and pro dancer Sharna Burgess were crowned the winners of this season’s Mirrorball trophy.

And though I mean no disrespect to Bobby or his very deserving partner, his victory underscored something about DWTS that has ruffled many feathers, including my own: All too often, the show rewards popularity over dance skill, and that needs to change.

I’ve covered Dancing With the Stars for eight seasons now, and for the most part, the Mirrorball trophy in those cycles has gone to one of the strongest — if not the strongest — dancers. But more and more, mediocre contestants with large, passionate, eager-to-vote fanbases are making it to the finale over contestants who A) were excellent from Week One, or B) put in the work to become excellent over time.

There is an easy argument to be made here that Dancing With the Stars is a goofy reality competition show and shouldn’t be taken so seriously. I don’t disagree; in fact, I’ve tweeted in the show’s defense before, asking those who mock it to consider that, hey, these amateurs are just trying their best to do something scary on live television, OK?

The flip side, though, is that regular viewers of DWTS are investing hours of their time into each new season — and part of the fun is watching these contestants actually get better over time, until a celebrity who truly deserves the win is (ideally) handed the Mirrorball trophy. The novelty of watching a bad dancer stumble his or her way across the ballroom wears off after about two weeks; after that, DWTS is only compelling if the celebs are taking the judges’ criticism seriously and showing real change week over week. (The Season 27 finalists who did not win — particularly Harry Potter alum Evanna Lynch — showed incredible growth from September to November, which made Bobby’s “Well, America loves ya!” win all the more frustrating.) 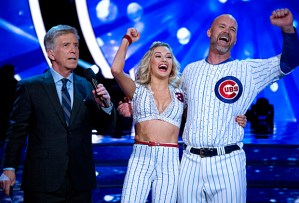 This argument doesn’t only apply to Bobby, whose triumph I don’t mean to insult; he came on the show with zero dance experience and clearly had a busier schedule than most of his fellow competitors, which means it’s a minor miracle that he even survived nine weeks of broadcasts.

But if we’re speaking objectively about the best dancer of Season 27, it wasn’t Bobby — nor was it The Bachelorette’s Grocery Store Joe, who similarly relied on his fanbase to make it to the semifinals. Former MLB catcher David Ross wasn’t a superb dancer either, but Chicago Cubs fans took him all the way to second place in Season 24. Bristol Palin’s supporters carried her to third place in Season 11, and the list goes on. Meanwhile, phenomenal performers like Glee’s Heather Morris and Fuller House actor Juan Pablo Di Pace had their Dancing careers cut short, despite terrific routines and excellent scores from the judges.

As a fan of Dancing With the Stars, I’ve found that it doesn’t really matter to me how much dance experience a contestant possesses at the beginning of the season. What makes the show enjoyable is what he or she does with their time on the show, whether they start strong or spend weeks climbing to the top of the leaderboard. To see proficient contestants leapfrogged by someone who simply got enough votes, despite any evidence to suggest he or she is a good dancer, makes the entire season feel like a waste of time. (Sharna Burgess, for example, was still counting the beats aloud for Bobby during their finale performance in order to keep him synced with the rhythm. In the finale!)

I wholeheartedly understand that America’s votes are a fun and integral part of any reality competition show; Carrie Ann Inaba, Len Goodman and Bruno Tonioli shouldn’t get the only say in who advances each week, and I’m frankly not entirely sure how DWTS should change its voting structure. Perhaps, as many fans have suggested, the judges should get a “save” option that expires after a certain week. Perhaps the show should take a cue from So You Think You Can Dance and allow the judges to decide which in-jeopardy pair goes home. Or perhaps it’s as simple as giving the home audience’s votes less weight than the judges’ scores.

DWTS will likely opt not to change its system at all — but after 27 seasons, the series is in need of a tune-up. Yes, this show does play by slightly different rules than most reality competitions; after all, the winners of SYTYCD, American Idol, et al. actually want to perform for a living, whereas DWTS hopefuls can take the trophy and split. But the show has revealed, with increasing frequency, that it doesn’t much matter if a contestant earns high marks or makes noticeable improvement each week. All these amateurs seem to need is a gaggle of fans who will vote tirelessly for their favorite — and that’s not a competition I’m interested in watching.