The Dancing With the Stars ballroom was a sea of dropped jaws on Monday night, after Season 27 frontrunner Juan Pablo Di Pace failed to score a spot in the Nov. 19 finale. (When your elimination inspires a Change.org petition, you know you’re doing something right.)

TVLine spoke with the Fuller House actor after his surprising ouster, and he admitted the elimination was “heartbreaking,” despite being touched by the “outpouring of love and outrage and anger” from fans.

“People are so amazing, and the fans are so vocal, so I’m good. I’m really good,” Di Pace told us. “But I was still shocked and sad to lose. For me, it’s a talent and a love for dance competition. It’s heartbreaking when you work your ass off.”

In order to determine who goes home each week, Dancing With the Stars combines the judges’ scores (which can reach a maximum of 30 points) with votes from the home audience. But the current system weighs viewers’ votes more heavily, which means even a well-scored contestant like Di Pace can be sent packing if he doesn’t get enough support from the audience. In fact, Di Pace was sent home even after scoring perfect 30s for both of Monday’s performances. 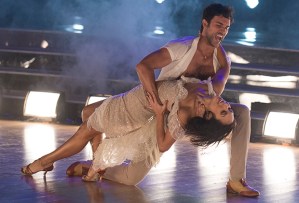 “It’s like a chess game. Every moment, every interview, every dance, every comment from a judge could either hinder you or get you to the next week,” Di Pace said. “We knew we weren’t the ones with millions of fans. We were the ones with a lot of hard work and passion and talent. So I wasn’t sure I was going through.”

On the heels of Di Pace’s elimination, incensed fans are calling for changes to the voting system; some have even suggested the introduction of a “judges’ save,” through which Carrie Ann Inaba, Len Goodman and Bruno Tonioli can spare a couple that would otherwise be booted. (And this isn’t the first time such an idea has been posed: Glee alum Heather Morris was also prematurely eliminated from Season 24, which sparked a similar discussion about changes to the voting.)

“The show’s been going on for 27 seasons, and looking at the thousands of comments I’ve got, people aren’t happy with the system. So, yeah, 27 seasons later, maybe it is time for a refresh, a little nip and tuck,” Di Pace offered. “Maybe instead of being completely a popularity contest, it could actually be more of a skill contest. But who am I to say? I think the fans’ outrage will probably work for something.”

Di Pace and partner Cheryl Burke have been invited to reprise their Argentine tango on Monday’s season finale — and even though “it’s not about the trophy” for Di Pace, he regrets that his partnership with Burke had to come to an early end.

“If I’m going to be objective, we were the ones bringing pieces of art to the show. We were bringing really good, amazing pieces,” he said. “For that reason alone — the fact that we didn’t get to perform one last freestyle, which was going to be out of this world — I’m sad.” (With reporting by Andy Swift)

Dancing fans, which of the four remaining couples do you think will win — and should win — on Monday? Cast your votes in our polls below, then hit the comments to back up your choices.