Tuesday’s This Is Us seemed to subtly set up another of the show’s signature riddles: What the heck happened to Kate when she was a teenager, and what did her boyfriend have to do with it?

Here’s hoping that the revelation isn’t parceled out in small bits over the whole season, as the family drama is wont to do. “How, exactly, did Jack die?” was a rough one to get through, but “How, exactly, was Kate abused?” — which is what it seems like, no? — seems even more heartbreaking.

Read on for the highlights of the Milo Ventimiglia-directed “Storybook Love.” (And be sure to read Ventimiglia’s thoughts on helming the episode here.)

GUESS WHO’S FLYING TO DINNER? | This episode is even more flashback-heavy than usual, so let’s start with young Rebecca and Jack on their first day in their new house. She’s early-second-trimester-ish pregnant and adamant that they’re going to have a nice, home-cooked dinner. But it’s taking forever to search their unpacked boxes for the right pans, and Jack can’t find one leg of the dinner table. Then she burns the lasagna. Then a bird flies in through an open window and terrorizes Jack, who’s deathly afraid of the feathered little bugger. (Side note: We don’t often get to see Jack lose his stuff in this fashion. Ventimiglia is hilarious in the scene.) As Mr. and Mrs. Pearson flail about, trying to get the bird to leave, the lasagna falls on the floor. What else can they do but laugh at the absurdity? “And that’s when it became a perfect night,” Rebecca tells her kids years later, during another disastrous dinner that we’ll get to in a minute. “We just let it be what it was.” 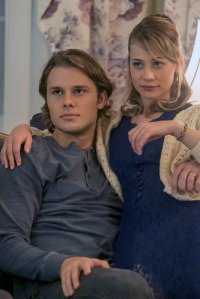 A TOAST TO THE BRIDE, TO THE GROOM | In another flashback to the time right after Kate and Rebecca moved into their new home, Rebecca gathers all the kids and their significant others (and Miguel) for a meal to celebrate Sophie and Kevin’s recent wedding. “Do you think a fancy dinner is going to make it less bizarre that Kevin got married five years after puberty?” Kate snarks.

Randall brings Beth, who gifts Rebecca with some hot sauce. Everyone tenses up at that — apparently, Jack put hot sauce on everything — but Beth explains that her father loved the condiment so much, he’d bring it as a hostess gift… but only so that he’d be assured he could use it at other people’s houses. Everyone relaxes a little, and Kate uses the moment to try to get Randall to agree with her that their brother’s marriage “is a little weird, right?” But he refuses to pile on, asking her instead to be supportive, for Rebecca’s sake.

Which is fine and good, but then Kevin and Sophie show up and make a huge deal of calling each other “wife” and “husband,” then he picks her up and carries her over the threshold. “This is how we enter buildings now,” they inform everyone. “That’s weird,” Randall says in a low voice. “Thank you,” Kate replies. One thing that seems to make it better: The record-store guy, Marc, surprises Kate and introduces himself to everyone as her boyfriend.

The dinner is stilted and strange. The food is nearly inedible. Kevin and Sophie’s reasons for getting married are ridiculous. And by the time The Big Three start to argue in the kitchen, Rebecca has had enough. “So help me God,” she informs them through gritted teeth, they are going to “move forward… So pull yourselves together, pretend that you like burnt, raw food, get your whiny little asses back out in those seats and enjoy my damn dinner.”

AS YOU WISH | During another little break in the meal, Miguel introduces Rebecca to a vintage that got a Wine Spectator score of 90 for “Doubling as a Metaphor.” He explains that conditions aren’t always ideal for the wine’s production, so the people who make it “have to wait out the bad years, believing there’s a better year coming. And there almost always is.” Rebecca nearly cries, but she pulls herself together. And then bolstered by that sentiment, announces to the gathering that she knows her dinner is terrible. Everyone chuckles, relieved that they won’t die of salmonella from eating Rebecca’s undercooked game hens. 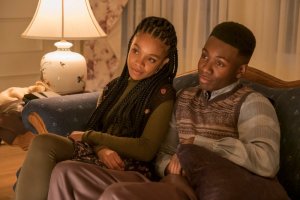 They order pizza and sit in the living room while Rebecca gives Kevin and her new daughter-in-law their gift: a song. (Side note: I know I have a heart of stone, but I rolled my eyes hard at this one. Get the kids some dish towels or something, Mom!) She performs The Princess Bride theme song “Storybook Love” in honor of Kevin and Sophie’s favorite movie, and all the couples seem very happy.

RANDALL’S REVVING UP | In the present, a stressed-out Tess has a panic attack at school, causing Randall to lament to Beth that he’s passed his anxiety on to their daughter. She remembers right after Randall’s breakdown at his office in Season 1, when William said something similar: He’d suffered from anxiety his whole life, and of all the biological attributes he could’ve given his son, “I hate to think that it was that.”

Back in Philly, Beth calls both Tess and Randall to the kitchen to tell them that both they and William are some of her favorite people in the world, and she doesn’t want to hear them badmouth any aspect of themselves — even their paralyzing anxiety. Then, using an example William said his mother used to employ to help him feel better, she pours a couple of glasses of seltzer and instructs them to remember that the bubbles will always settle, just like their anxious thoughts will always eventually calm down.

That night, Beth announces to Randall that she’s found a therapist for Tess — and one for him, as well. He says he doesn’t need any professional help, but she points out that his behaviors (extra-long runs, constant nervous leg bouncing) have her worried that he’s headed for another rough patch. Randall firmly and curtly shuts her down, then goes to sleep without discussing the matter further. 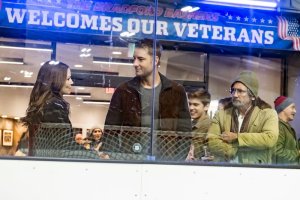 THANK YOU FOR YOUR SERVICE | Kevin meets Ryan, Cassidy’s estranged husband and Matty’s dad, at a hockey game. Cassidy is among the veterans being honored during a ceremony on the ice that evening, but Ryan’s attitude — both about the event and toward Kevin, of whom he’s deeply suspicious — is pretty sucky. When Kevin and Cassidy drop her son at his dad’s house after the game, Kevin uses a private moment with Ryan to take him to task for being on his phone throughout Cassidy’s big moment.

Rather than tell Kev to go to hell, which is what I think pretty much anyone in Ryan’s situation would do, he tells a story about how he and Cass met in high school and have been together ever since. “That ceremony that you’re talking about honored the thing that broke my favorite person in the world. I was staring at my phone because otherwise, I would’ve started openly weeping in front of my son. And that’s not what he needs from me right now,” Ryan shoots back. Kevin, chagrined, immediately apologizes. But Ryan doesn’t want to hear it. “Stay away from my wife,” he warns.

When Cassidy comes out, Kevin has good news for her: “He still likes you.” And back at the trailer, Nicky — who’d bailed on the game when the noise and the beer and the people were too much for him — makes Kevin feel better by sharing some ice cream with him the way Jack used to… and how Jack’s dad did with him and Nicky way, way back. 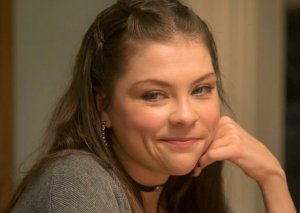 WHAT HAPPENED? | All Kate does this episode is call Randall and harangue him about the baby gift he warned her was going to show up that day. Rebecca comes over to see Little Jack, so they’re both there when the present finally shows up: Randall and Kevin) sent his sister the family piano. She’s touched.

In the seat’s bench, she finds a stack of Polaroids that they took the night of Rebecca’s failed restart dinner. And Kate and her mom smile at the memory… until they come to a shot of Marc and Kate. Rebecca sadly comments that she didn’t see what was happening right in front of her face back then. “I didn’t see it, either,” Kate says, and both women are very emotionally affected by the thought.

Now it’s your turn. What did you think of the episode? Does Kate’s new storyline sound like it will be wrapped up soon? Or do we have another big puzzle on our hands? Let us know in the comments!