Not quite sure what happened at the end of this week’s This Is Us? Good, says Milo Ventimiglia, who pulled double duty by acting in and directing the episode: That was the point.

A scene at the end of the hour found adult Kate and Rebecca sifting through Polaroids taken when The Big Three were around 18. The women cheerfully reminisced… until they came across a photo of teenage Kate and her boyfriend, Marc, that gave them pause. The conversation then turned to what Rebecca wished she’d been able to see unfolding before her during those tough years immediately following Jack’s death. Was she referring to abuse? Something else? Viewers were left to wonder. (Read a full recap here.)

The moment was one of several emotionally fraught ones in the episode, and Ventimiglia tells TVLine that much of his preparation for directing his first installment of the drama centered on getting them exactly right.

“Once I visualized everything and understand what I need, then it’s, ‘How do I shoot it efficiently?’ Not only for the crew, but for the actors coming in. How do I not overshoot and wear someone down in their performance, because there are some pretty heavy beats,” he says. Among them: Randall and Beth’s handling of Tess’ newly discovered anxiety issues, Kevin’s burgeoning friendship with Cassidy and Rebecca’s blowup at her kids in the kitchen. And then… 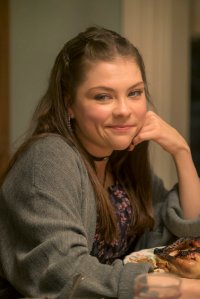 “Oh my God, Kate in the very ending,” he adds. “We need the audience to ask the question: ‘What the f–k happened?!'” And lest you think you’re reading too much into Kate and Rebecca’s reactions to the shot of Marc, “It’s 100 percent a thing,” he confirms.

Read on as Ventimiglia takes us through his turn behind the camera — and the Easter eggs you might’ve missed.

TVLINE |This was quite the episode to direct.
Yeah. There was a lot going on in it, right?

TVLINE | Yeah — let’s start there. It seemed like there were a lot of small scenes that needed to be nailed. Accurate read?
Sure.

TVLINE | From a directorial standpoint, do you find that tougher? Easier?
No. I mean it doesn’t matter if something is a tiny scene or a seven-page walk-and-talk. They’re all the same. Whatever these characters are going through, whatever story you have to service, it’s all the same. There are no big or small moments. All scenes are equally important. But knowing that, it was like, “How do I shoot the show efficiently so that I’m not undercutting one moment versus another?” There was a lot of micro detail within a scene for each character, so it’s just tracking all that. What it really came down to for me as a director was homework and preparation.

TVLINE | Give me a sense of what the prep looked like for you.
For me, it’s reading the script, taking some notes on things that stood out. It’s a lot of visualizing. I really need to see it, and a lot of that visualization happens from visiting the sets and spending some time just walking around. When I was a younger actor and I would do theater, I would spend a lot of time just walking around stage and becoming intimately knowledgeable of every detail on stage or in a set — and [in this episode], we had quite a few sets that were new that were never built. So Rebecca and Kate’s new home, I had to wait until maybe a day or two before we started filming before I could really walk around and understand, But we have an amazing production team. I said, “Can we get the couches oriented this way? Or move the table here, get a refrigerator over here?” It’s like, “Help me out in getting the set pieces together.” 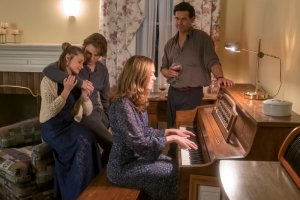 … [There were] all these little details. I mean there’s even little Easter eggs I kind of threw into it, just because it made me laugh and chuckle. In that stack of photos in the piano bench, there were some photos of Jack and Rebecca from the past when they were younger. Mandy and I took those the first episode back just as a fun thing, and I handed them off to our prop guy. Just like, “Maybe we’ll use these later on,” and it turns out we’re using them. Maybe we go back and revisit that moment, or a little nod to the pilot with my opening with all the boxes and whatnot. So there are things. The detail is well thought-out.

TVLINE | Most of the cast was in this episode.
Yeah. Just about everybody.

TVLINE | Is there anyone you feel like you now have a greater kinship with, because of the directing?
You know, because I hadn’t really been on set with the adult Big Three — Sterling [K. Brown], Justin [Hartley], Chrissy [Metz] —  I think there was a little caution from them to be like, “OK, how is this going to go?” Sterling and I, we found right away this rhythm of working where… I mean, I was basically there just to serve these actors and serve this crew and offer advice and points of view and perspective when maybe I saw an opportunity to go from a good performance to a great performance. My job was also do that quickly. Get people onboard and let them know that you’re there looking out for them and you’re not going to make them look bad and you’re going to support them and help them along the way.

TVLINE | These are two very dumb questions to close us out, especially after your very thoughtful answers so far. But bear with me. First, what was in the ice cream carton? Because it wasn’t ice cream.
[Laughs] No, it was not. I think it was kind of like a giant stick of butter. We needed something that wasn’t going to melt on us. We needed something that was going to cut like ice cream, which it did. It was like a sweet stick of butter. It was kind of delicious, but you really didn’t want to eat too much of it.

TVLINE | During the very funny scene with the pigeon in the house, was it hard for you or Mandy not to break? I imagine a lot of what you were doing was kind of off the cuff.
There was a lot of humor in it, and we did laugh about a lot of it. But at the end of the day it was just one of those days you kind of cross your fingers and you do the homework and you get everybody on the same page and you hope that everything works out. By the end of it, I was exhausted and really elated with what we got. I felt like we got everything. The bird was remarkable. The scenes we actually filmed with the bird were really great. The bird performed, so much so that we had very little need for [special effects], but it really folded in nicely with the [special effects].