Grab that heart-shaped box of chocolates and prepare to feed your feelings, because the Valentine’s Day episode of This Is Us is an emotional eater’s feast.

An overwhelmed Randall is not, as some of you posited last week, exhibiting the early symptoms of multiple sclerosis. He is, however, getting crushed by an increasingly competitive workplace and the certainty that his biological father’s death is rapidly approaching.

By the end of the episode, poor Randall is so overcome that he’s rendered immobile, crying on his office floor until a member of the family drops everything — on a very important night — to be with him.

Elsewhere in the episode, Jack and Rebecca have a big fight on V-Day, and Kate is kicked out of fat camp. Read on for the highlights of “Jack Pearson’s Son.” 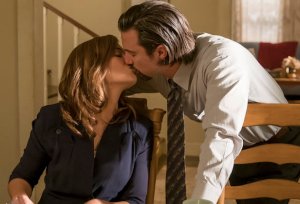 TOUR TRAUMA | On a Valentine’s Day in the past, Rebecca is prepping for leaving on tour and worrying that Jack and the kids will suffer in her absence. And when they learn that Kevin and Sophie are having sex, and that Randall is having a panic attack about a school assignment, she nearly backs out of the tour. Jack reassures her that they’ll all be fine, but it’s clear that he’s not psyched about his wife taking off for multiple weeks.

At her gig that night, Jack doesn’t like the flirty, onstage vibe Rebecca has with bandleader Ben. And when Ben, in casual conversation, drops that he and Rebecca used to date, Jack is livid: He didn’t know. So Jack cancels their dinner plans and gives her the silent treatment until they get home, where he confronts her. Rebecca counters that she was with Ben “for two months when I was 19” and that she didn’t tell him because “you get crazy and jealous, and I didn’t want you sitting at home, spinning out about something that didn’t mean anything.”

Still angry, Jack says he doesn’t want her going on tour and admits that he only acted supportive because “I was trying to be a good guy.” Rebecca’s like, oh, the gloves are off now? OK. “I needed to having something for myself, without you getting in the way,” she counters. Jack sadly replies that he never thought of himself as being in her way, then he leaves to have a sad bacon cheeseburger (their planned meal) by himself. And when his drink comes, it’s troubling — given his past — how much the liquor seems to comfort him.

PUMP THE BRAKES | Like Duke predicted, Kate goes to his cabin… to tell him that she’s nothing like him: “Do I have issues? Yes. But deep down, I’m awesome.” Atta girl! Unfortunately, we learn that the reason he’s allowed to stay on staff despite his extreme d-baggery is that his parents own the retreat center. And after her tirade, Kate is out.

So she shows up at Toby’s hotel room, and he’s less than excited to see her. After she apologizes and they make nice, they realize that they’re engaged, yet the know very little about each other. So he proposes a “Toby and Kate deep dive” in which they ask and answer questions about each other. Information gleaned during this exercise: They’re both dog people, he wants kids (and, given her pleased reaction to him saying so, I’m assuming she does, too), and he’s struggled with depression since high school.

But when Toby presses Kate for details about her dad’s death, she wants to tell him… but she just can’t. “I’m just not quite there yet. I mean, it’s been blocked for a really long time,” she says tearfully. So they leave it that she’ll share more when she feels comfortable, but they also later decide — well, Toby decides and Kate agrees — that they should put off the wedding a while as they’re getting to know each other better. “I think that the woman that I marry should be able to talk to me about anything,” he explains, and while I agree with the sentiment, something about the way he says “the woman that I marry” and not “you” doesn’t sit right with me.

LET’S HOPE THERE’S AN UNDERSTUDY | On the morning of his opening night in The Back of an Egg, Kevin has a nightmare that Katie Couric calls him a hack during an interview. He wakes up when Sophie calls to say that she’s sorry she can’t come to the performance because of work. During the conversation, they agree that they’re “cautiously dating,” and they both seem really happy about it. She tells him to break a leg.

Kevin then spends all day whipping himself into a nervous frenzy, which doesn’t get any better when Sloane informs him that the New York Times theater critic will be in the crowd. A quick stop at Randall’s office doesn’t help, either, and Kev eventually finds himself on his mom’s doorstep.

Rebecca isn’t home, so Miguel invites his stepson in for a cup of coffee and a minor freakout. Their awkward conversation eases a little when Miguel calms Kev’s nerves by reminding him that Jack was always the calm guy everyone wanted around in a crisis, and “sometimes you remind me so much of him that the hair on my arms stands up.” He adds that’s why it hurts so much that Kevin doesn’t like him. But anyway, “You are Jack Pearson’s son.”

And that’s what sticks in Kevin’s head when Randall calls him right before the show to say that he’s not going to make it. Randall sounds so odd, so unlike himself, that Kevin decides he needs to be like Jack and go make sure everything is OK. Admirable, right? Unfortunately, Kevin has this epiphany literally as he is about to walk on stage to start the play. The lights come up, Sloane says her first line, and… there’s no one there to answer her. In the audience, Rebecca, Miguel, Toby and Kate are confused. 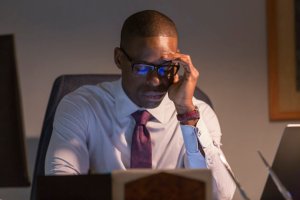 RANDALL AT ROCK BOTTOM | This would be the perfect time to check in with Randall. Oh look! He’s falling apart at the seams. He’s not sleeping. He’s struggling to hold onto his accounts at work. He’s snapping at the kids. And when Beth’s mother falls and breaks her hip, sending Beth hurrying to her side, Randall begins the slow-motion car crash that is his day.

At the office, Randall’s prep for a very important call with an even more important account is cut short when the meeting time is moved up. Then William locks his hospice nurse out of the house, necessitating a trip home so Randall can beg his father to cooperate with the hired help. William apologizes, lamenting that his body is failing him and he doesn’t know how much longer he’ll be able to hold on this way.

So by the time Randall speeds back to work for the call, he’s got nothing in the tank. He completely freezes up at the meeting. Sanjay has to step in and literally speak for him as Randall hastily wipes tears off his face. Randall spends the rest of the night crying in his office, and that’s where Kevin finds him, slumped against the wall. Though a flashback shows us a time in the siblings’ adolescence when Kev ignored his brother’s panicked pain, in the present, he sits down next to Randall and pulls him into an embrace as Randall cries even harder.