For a guy who seems to value the power comedy, This Is Us‘ Toby really needs to learn how to read a room.

That lack of awareness is painfully clear in this week’s episode, when it takes all of five minutes for the big guy to overstay his welcome at Kate’s “immersive weight-loss retreat.” Looks like the evolving Ms. Pearson may be more in love with the idea of her guffaw-getting fiancé than she is with the man himself.

Still, I don’t expect Kate and Toby’s engagement to come to an end anytime soon. As the rest of the episode illustrates, falling in love is often an instantaneous thing, a thunderbolt moment — but falling out of love can be a slow process, and it takes practice.

But does Duke have to be involved in this whole thing? Because man, he is insufferable.

Read on for the highlights of “I Call Marriage.”

TOO MUCH TOBY | Kate is kicking booty at her weight-loss retreat: 10-mile hikes, yoga, that class with the sticks. It’s good to see her doing so well. Toby texts her and tells her that there’s a package waiting for her at the main office; when she gets there, the package is him. She’s delighted… until he suggests that they take off and hang out at his hotel. She says no, then yes, but he apologizes for throwing off her schedule and leaves.

Soon after, though, he’s showing up in her sticks class, which he refuses to take seriously, and it irks Kate. After everyone else clears out, the couple gets into it: She’s mad at him for mocking something that’s working for her, he’s mad at her for leaving him behind to heal alone in New York. Oh, and he planned to give her his grandmother’s ring — and he still does — but the way they leave things is painful. 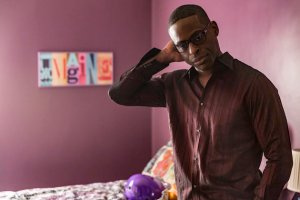 RANDALL ON THE VERGE | Remember when Beth said that Randall went temporarily blind while he was trying to make their life together perfect all those years ago? Seems like something similar is happening now. He’s having nightmares about finding William dead, he’s snapping at his wife and kids, he’s denying the fact that William is slowly fading and he’s losing some of his cache at work to that new guy, Sanjay. Through the whole episode, including a chess tournament Tess wins, Randall swears he’s fine. But we see his hand shaking at the end of the hour, and we know he’s not.

LAVA FRIES FTW! | Kevin and Sophie meet up at their favorite diner, and that’s where we learn a lot about their life together. She kissed him for the first time on a field trip to New York when they were in eighth grade. When they were married, they jointly decided to do the long distance thing so he could try to make an acting career for himself out in Los Angeles. She left him after he cheated on her. She’s now a nurse manager with a boyfriend. And she still really, really likes lava fries.

But Kevin follows her down to the subway (which looks more like Washington, D.C.’s Metro than any MTA car I’ve ever been on) and makes his case: The day she told him she’d marry him was the best day of his life, and if she’s willing to give him another chance, he’ll wait for her at the diner the following morning. She shows up, of course, because Earnest Kevin is even hotter than Shirtless Kevin.

SPLIT DECISION | Via flashbacks, we see Jack and Rebecca get married at City Hall. She’s a gorgeous hippy-chic bride, all long, loose curls and a flower crown. His tuxedo has ruffly sleeves. And at lunch with friends after the ceremony, Worst Best Man Miguel gives a speech about how perfect the bride and groom are for each other. While he’s talking we watch a montage of moments from their relationship: sex in the shower, her puking from food poisoning, them goofing around while brushing their teeth.

Cut to later in their marriage, when the kids are teens and Jack and Rebecca have become much less playful and a little more resentful of certain aspects of their life together. For instance: Rebecca is singing regularly with Ben’s band, and at dinner with Miguel and Shelly, Jack makes a joke-but-not-really about how if he wants to see his wife, he needs to go to one of her shows. That awkward moment, though, is soon eclipsed by an announcement from the other couple: Miguel and Shelly are getting a divorce.

At home afterward, Jack can’t understand how his best friend could do such a thing. “You find your soulmate, you get married, you stay together until you die: Period,” he proclaims. But Rebecca says Shelly has been unhappy for a while, and at work later that week, Miguel explains that their uncoupling has been in the works for a while: “We stopped noticing each other, Jack. We stopped trying to make each other happy.” I know I should be sympathetic, but ugh: Shut up, Miguel.

STATE OF THE UNION | Meanwhile, Ben totally wants Rebecca and not-so-subtly throws shade at Jack after a gig. The band is about to embark on a multi-state tour, and Jack should let her go, “if he really loves you,” Ben says. I already loved Rebecca, but my Care Bear Stare for her glows even brighter when she promptly and effectively places the band leader in his place with a scathing monologue that demonstrates exactly how much she notices Jack doing for her every day. “My husband’s a freaking superhero,” she says, finishing him off, “and you have no idea what you’re talking about.”

And to safeguard against the complacency that killed Miguel and Shelly’s happiness, Jack whisks Rebecca off to their first apartment, which he’s rented for the evening, and provides her with a romantic night of twinkly white lights, Champagne and more shower sex. They’re in a good place, they agree as they sip bubbly on the bathroom floor. And that’s when Rebecca whispers that the band has an upcoming tour… and she wants to go.