This Is Us routinely pokes a thorny branch into memories from my childhood I’ve not thought about in years, and after 11 episodes, I’ve come to expect the bittersweet twinge that accompanies these intrusions. But for the first time in the NBC series’ short run, this week’s episode did not make me misty and/or sad and/or a pile of sniffling sobs. Two possible explanations:

* The drama is still pulling back on the tear-jerking slingshot, story-wise, and we’re gonna get walloped in the next new episode. (Jack’s funeral, anyone?)

* This Is Us has broken me, emotionally, on some fundamental level.

Let’s go over the highlights of “Three Sentences,” then you be the judge.

INDUBITABLY! | A montage of home-movie footage shows us a bunch of celebrations of the Big Three’s (and Jack’s) birthdays: cake, pin the tail on the donkey, paper hats, all that good stuff. But on the eve of their 10th birthday, Kevin and Kate announce that they no longer want a joint bash: He wants a Princess Bride party, Kate wants a Madonna party, and Randall… doesn’t care much either way.

So the Pearsons go about preparing for three simultaneous parties, all thrown at the house. And Jack thinks this is the perfect time to bring up the idea of having another kid. Rebecca gently tells him he’s insane, that she’s done having children — oh, and they’re not getting a dog, either.

THE PARTY LINE | On the day of the party, everything’s going well until Jack and Rebecca realize that there’s almost no one at Randall’s party. Not that Randall minds, though. “I have three really good friends” and they’re all in attendance, he reassures his parents, who look horrified, then pleased that they raised such a smart, self-assured kid.

And off of that parenting win (I guess?), Rebecca reconsiders and tells Jack that “maybe it wouldn’t be so bad to shape another little incredible person.” He’s delighted… until he tries to cheer up Kate, whose friends have all migrated to Kevin’s party, to no avail. Though the bit about Jack lifting her spirits by having her teach him to vogue is so dorkily cute. (And believe me, college-age Kim just took a time machine, read that sentence, rolled her eyes and scoffed in disgust before hopping back in the time machine to make sure she’ll catch that Lilith Fair concert she’s been looking forward to.)

When the parties are wrapped, Jack and Rebecca collapse on their bed and agree that they have nowhere near the energy necessary to raise three pre-teens and an infant. And when they hear the kids making noise in the dining room, they come downstairs and join in a birthday after-party that involves throwing wrapping paper and eating leftover cake.

CAMPING IT UP | In the present, Kate calls off her gastric bypass — being around for Toby’s heart operation freaked her out a bit — and “I just don’t think it’s the right time for surgery,” she tells the doctor, who then suggests an alternative: “an alternative weight-loss experience.” Or, as Kate surmises, “A fat camp?” 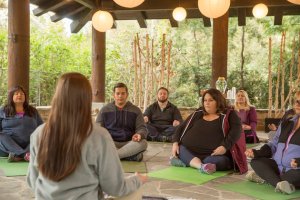 But Toby is on board, and Kate decides that she’s going to have a Biggest Loser-type lifestyle change, complete with a skinny jerk of a trainer and lots of puking during workouts. Imagine her surprise when she gets to the camp and it’s all yoga and meditation and feeeeeeeelings and she gets hit on within five minutes of her arrival.

“It feels like a cult, or Whole Foods,” she says to Kevin during a phone call. And for the first day or so, she’s not into any of the hikes or classes or anything. But when the guy who hit on her, whose name is Duke, is kind of a jerk to her and calls her a quitter, she tries again. And in a group class that involves beating yoga mats with sticks, she taps into the anger and hurt that she’s been holding inside for quite some time. As Kate tears up, we see brief flashbacks to Jack’s funeral, when the kids were teens.

Later, she thanks Duke for kicking her butt. He’s still rather gruff, but he brazenly tells her she’s sexy and that they’re going to have their own “This one time, at fat camp?” story to tell by the time he’s through with her. She disagrees… but does she really?

TAKE YOUR FATHER TO WORK DAY | Though he’s under pressure at work, Randall can’t say no when a revitalized William — who feels a ton better now that he’s no longer undergoing chemotherapy — shows up at the office with a request for his son to join him for the afternoon. So they buy sunglasses, hunt down a specific kind of egg cream and drive around in a parking lot, all so William can live out a childhood fantasy of being a cool cat. It’s sweet.

SOPHIE’S CHOICE | Tasked by Kate with keeping Toby company while he’s medically grounded in New York, Kevin takes his future brother-in-law to a bar full of pretty people. “You see those two women? They look like Westworld hosts,” Toby quips. But all Kev wants to talk about is his Sloane-Olivia problem, which prompts Toby to give him lessons in romantic gestures, aka How Those Who Are Not Straight Outta an Abercrombie Catalogue Woo Women.

Toby advises Kev to pick a girl, then imagine that he’s only got “one shot, three sentences. What are those sentences, and who are you saying them to?” he wonders. When Kevin gets clarity, he winds up on the doorstep of… some woman we’ve never seen before. Turns out Kevin was married back in the day, his wife’s name was Sophie and she is a childhood friend of Kate’s and the love of his life, the one for whom he pines above all.

Sophie is less than impressed with Kevin’s big speech on her doorstep, but she reluctantly agrees to meet him to talk. She texts him “Where?” soon after he leaves, which isn’t exactly Pretty Woman‘s Edward climbing the fire escape to fetch Vivian back to his side, but it’s a start.

Now it’s your turn. Are you dreading the next new This Is Us? What did you think of this episode? Sound off in the comments.