Hey Randall, guess what? You were almost a firefighter’s kid.

This week’s This Is Us is completely set in the past, eschewing an update on the adult adventures of The Big Three in favor of showing us what else happened as Kevin, Kate and Randall were about to enter the world.

Yes, the series premiere offered us one version of that fateful day, in which one of the Pearson triplets dies during labor, prompting Rebecca and Jack to adopt another infant who serendipitously shows up at the hospital after being left at a firehouse. But “The Big Day” gives us more context and fills in more detail — painful, sob-inducing detail — about the firefighter’s marital strife and Dr. K’s all-encompassing grief.

In short: This Is Us somehow found a way to make the day a baby died even sadder.

Read on as we review the major beats of “The Big Day.”

CRAPPY BIRTHDAY | In the fashion-not-as-bad-as-I-remember-’80s, Jack and an incredibly pregnant Rebecca dance to Stevie Wonder and debate baby names. The fact that Rebecca is willing to get up and cut a rug with her husband is very impressive; by that point in my pregnancy, I was at the “Bring me all the finest ice creams of the land, and don’t expect me to get up before the kid turns 1” point.

Pretty soon, we’re seeing Rebecca at peak pregnancy, which is to say that she’s in a terrible mood and nothing fits. She’s so cranky, she forgets that it’s Jack’s birthday and instead harps on him for not having the money pit — pardon me, their dream home — done before the babies arrive. When Miguel calls and asks his buddy to golf, Jack goes. (It helps that Rebecca kicks him out of the house… and only then does she realize what day it is. “I am a monster,” she laments.)

She tries to bake a conciliatory birthday cake but realizes she’s all out of supplies, so she duct-tapes flip-flops to her swollen feet and hoofs it to the nearest store… which happens to be a liquor store… where all she can procure is Twinkies, a checkout-counter banana muffin and a Pittsburgh Steelers Terrible Towel.

She somehow fashions cupcakes from her haul, then levers herself into the rocking chair in the nursery to have a heart-to-heart with the current occupants of Hotel Rebecca. “I can’t wait to meet you guys,” she says, musing about making Halloween costumes with her kids and talking up Jack (“You’re going to be huge fans”) while voicing her concerns about not being a perfect mom. “But I will protect you fiercely, and I will always sing to you when you can’t sleep and I will always be excited to hear you laugh,” she says. “I love you so much it hurts, and I haven’t even met you yet.” Solid work here from Mandy Moore.

When Jack gets home from his golf outing, he films her little unguarded speech. She soon realizes that she’s on camera, and he and Rebecca make up, leading us to the Terrible Towel-as-loincloth moment from the premiere, as well as Rebecca’s water breaking. (Side note: Jack’s conversation with the golf douches, about wanting more time with his wife and kids? Devastating, in light of what we know now, eh?) 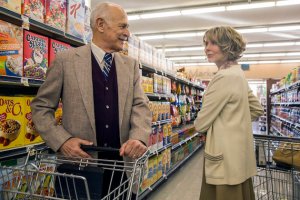 TIME TO HEAL | At Dr. K’s house, we see evidence of his dead wife — her wheelchair, her perfume — everywhere, and he carries on a full conversation with her empty chair at the breakfast table. It’s quite sad.

The OB-GYN later runs into a female friend (and widow) at the grocery store who seems rather interested in bagging his goods, if you catch my drift. But that moment of levity soon gives way to the doc’s incredibly awkward lunch with his son and daughter-in-law, who are very worried that he’s not handling his wife’s passing very well. And that’s when the kindly physician unleashes all of his pent-up pain.

“I will never move on, so stop asking me to,” he points out. “She was my wife. She was my life.” Gerald McRaney is so good, when he’s done, even I feel bad for raising my eyebrow at the empty-chair scene before. You take as much time as you need, Dr. K!

The despondent doc winds up standing at his wife’s grave, telling her that he doesn’t think he can go on without her. And that’s when his beeper goes off: It’s time for the Pearson pups to meet the world.

FIREHOUSE BLUES | Oh, you’d like more heartbreak, you say? Let’s cut to a confessional, where the fireman who will eventually rescue Randall is telling a priest that although he’s hopelessly in love with his wife, they’re in a “rough place lately” and that they need a “miracle” to make things right.

That miracle seems to happen when he’s at the station when William drops Randall there. But when the firefighter brings the baby home to his angry wife, thinking that they can adopt the kiddo and raise him as their own, she’s like, “Oh, honey. NOPE.” And that’s how Randall winds up at the hospital, instead.

The upside? Mrs. Firefighter eventually really appreciates what her husband was going for, with the praying and the newborn and all, and she decides it’s time to give their marriage another shot.

THINKING OUTSIDE THE BASSINET | Back to Rebecca and Jack, who are traumatized by the death of Kevin and Kate’s sibling. And after Jack listens to Dr. K deliver his “lemonade” speech, we hear the shell-shocked couple discuss what we only saw in the montage at the end of the pilot.

ALL’S WELL… | How about a happy ending? Dr. K cleans out his house and has dinner with his lady friend. And in a flash-forward, we see the Pearson family — when the kids are 10 or so — watching home movies, including the one shot the day they were born.

*Special thanks to Dave Nemetz for an incredibly helpful assist on this one.