For a dead guy, Jerry Ferrara is surprisingly energetic.

On a recent afternoon, the recent Power murderee (and admirably awake/alert real-life new dad to 5-month-old Jacob) was full of enthusiasm as he chatted with TVLine about tonight’s A Million Little Things guest spot (9/8c). Ferrara plays a producer friend of Rome’s, and the gig reunited him with his Think Like a Man co-star Romany Malco as part of ABC’s “Cast From the Past Week” event. “I will try to keep it brief, because I could talk about Romany Malco all day long,” the Entourage alum said. “If I could work with Romany regularly, I don’t think I really would have to work with anybody else.”

That’s high praise, coming from someone who’s starred in two highly successful premium cable series (in addition to playing shady lawyer Proctor on Starz’s Power, Ferrara perhaps is best known as Turtle from HBO’s Entourage). Read on to see why the Million Little Things reunion meant so much to Ferrara, and keep reading to hear his thoughts on Proctor’s bloody goodbye — and how the crooked counselor’s final move might’ve surprised him more than it did the viewers. 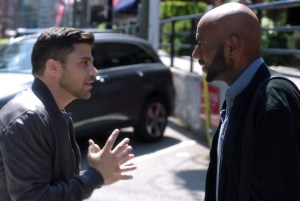 TVLINE | We’ve seen a sneak peek of your character on A Million Little Things, but what more will we learn about him?
He’s the business portion of the producer. You know I think there’s a lot of different types of producers in our industry and some are just about the deal and the art of the deal and the business of it, and some are about the creative aspect of the project and every now and then, you get the rare producer who about both the creative and the business aspect of it. As of now — and I’m learning more along with him as everybody else is — but I think he’s more about the deal. He gives Rome some notes that make [his script]  a more commercial-type project, and this is a passion project for Romany’s character. You see two worlds collide, like commerce versus art.

TVLINE | Your appearance is being billed as part of a big reunion week. Talk to me a little bit about acting opposite Romany after not having done so for a while.
When we did Think Like a Man one and two, we dubbed him the real Most Interesting Man on the Planet. We shot that movie in Vegas, and we’d be walking through the casino and someone would shout out, “Romany, how are you?” I’m like, “Oh Rom, It’s a fan.” He’s like, “No, I served with that guy in the military.” And then he’ll run into another person, and he’s like “I was in an R&B group with that guy.” I’m like oh, my God. You’ve had the coolest life! I just have the most respect for him. I think he’s a tremendous actor.

How you know you’ve crossed into a real personal relationship with someone is where months and sometimes even a few years can go by, and then when you reunite, it’s like nothing has ever passed, and that is very much my relationship [with him]… I told DJ Nash, the show creator, “Listen, I’m happy. I love the show and I’m a fan, and I’m really happy that this is working out with Rom. I would have done anything with any of the characters. It’s a great show, but Romany has a special place in my heart, so I jumped at the opportunity.

TVLINE | When I spoke with DJ last week, he said the door was open for the character to come back. Have you had any real conversations about that?
Yes. We have had some conversations… If DJ will have me back, I would love to go back. He’s a really great writer and great producer so we have talked about it, and I’m hoping it does happen. I think it’s got a good chance. 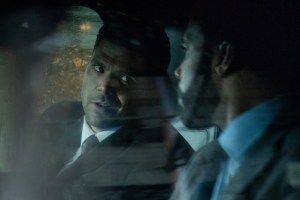 TVLINE | I also cover Power for TVLine, so… my condolences that Proctor didn’t make it the end of the final season — though I’m kind of surprised he lasted that long, given what he knew. Tell me about when you found out he would die.
I found out maybe about a few weeks before we shot it. I did have some warning from Courtney Kemp, the showrunner. She and I now know each other a long time, so she did allude to the fact that this last season is going to be a violent one…She called me into her office, and I didn’t realize it was happening until it was happening. Then she gave me the look, and I’m like, ‘Oh God, I’m done.’ [Laughs]

TVLINE | Did you have any inkling that he actually hadn’t trashed all of the incriminating information on Bailey Markham’s laptop?
No. That was one of my biggest questions. Because one of the other amazing parts of Power is the fan base is just unbelievable, so the thing I would get about the most in the street if I would come across a Power fan is, “What are doing with that laptop?” It was a major piece of leverage for Proctor, so I was even curious… Listen. I did not know in advance that he would put it on an SD card and leave it in a locket for his daughter. It’s kind of just out there now. It’s almost even scarier that it’s out of his possession, because who knows what his daughter [will do]? I truly don’t know, and I don’t know everything that happens up until the very end, so I don’t know what comes of it. You know, his last words were, “This ain’t over.” [Laughs] Yeah, a little cryptic.

TVLINE | Last question: Are you betting on Ghost or Tommy to survive to the end?
Selfishly, I’m going to bet on Ghost. Because 1),  I think in the end, Proctor was loyal to Ghost and was not necessarily loyal to Tommy, so I’m going to stick with that loyalty, and 2) I mean, f–king Tommy killed Proctor! [Laughs] I’m just rooting for Ghost. Now, nothing bad about Joe Sikora, who plays Tommy. He’s a wonderful guy, and he does a great job. We all buy him as that character. I’m rooting for Ghost.