During her time as Secretary of State, Madam Secretary‘s Elizabeth McCord fearlessly has brokered peace, de-escalated wars and advanced human rights causes around the world. But on a sticky night in late August, a bit of horsehide and some red stitching had the former diplomat on edge.

The nerves stemmed from the fact that the (fictional) Elizabeth, played by the (real) Téa Leoni, was set to throw the first pitch at the (real) Indians vs. Mets game at New York’s Citi Field… as American presidents have been known to do.

Yep, you read that right: When CBS’ political drama returns for its sixth and final season this fall, and thanks to a time jump, Leoni’s character will have gone from a member of President Dalton’s cabinet to leader of the free world.

So when it came time to take the field, both Leoni and her alter ego were sweating — and not just from the humidity. “I would rather have a root canal, naked, in Grand Central,” the actress tells TVLine the next day. “I think, in my professional life, it may have been the second most terrifying day.”

Getting the shot required four tries; not all of them were Hall of Fame-worthy. Eventually, though, “I threw this great, like, not a strike, but damn near, from the mound,” Leoni proudly reports. “It was very important to me that as the first female president, it was gonna get to the plate.”

President McCord’s baseball outing will appear in Episode 2 of the upcoming season, which the show’s producers say will look quite different from those that preceded it. There’ll be new sets (goodbye, Georgetown brownstone), new challenges (the switch from diplomacy to leadership can be a tough one) and a newly reduced cast (five longtime cast members are no longer series regulars — more on that in a moment).

Put all the changes together, and “It was like launching a new series,” executive producer Barbara Hall tells TVLine exclusively. 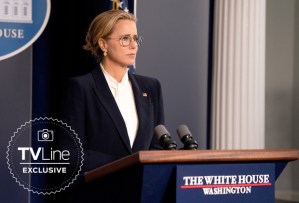 A SWITCH-UP AND A SCANDAL | The notion of Elizabeth McCord moving into the Oval Office started as an inside joke early in the CBS drama’s run: With the production often having to wait a while to find out whether it would be back in the fall, Leoni says, such a grandiose long-term plan seemed premature at best. But with each season’s renewal, the joke got a little less funny. And by the time Season 5 drew to a close, Elizabeth had made it official by announcing her candidacy for President of the United States.

When the finale aired, Hall and fellow executive producer Lori McCreary thought that Season 6 would portray Elizabeth’s path to the presidency via primary, the campaign trail and the eventual election. But then two things happened. First, CBS announced that Season 6 would be the show’s last. And second, Madam Secretary‘s Powers That Be had a revelation: The show always has portrayed politics through an ideal, West Wing-ish lens, with Elizabeth leading the charge on what members of the series’ creative team refer to as “aspirational” politics. Given that Season 6 would bow during the lead-up to the actual 2020 president election, would American audiences aspire to watching fictional mudslinging contest at the same time the real one was underway?

“We found a way to have the best of both worlds, where we decided to jump ahead and make her president,” Hall says. McCreary teases that a simmering scandal will cause Elizabeth & Co. to think back over their recent past, “And we get the fun of picking and choosing the moments that we go back to, so that we don’t have to take even four or five episodes to do a whole campaign.”

Leoni recalls that the choice to continue that mode of storytelling got some serious buy-in at the network. “[Chief Creative Officer] David Nevins at CBS completely agreed,” she says. “In his mind, he said, ‘When this comes back, she’s president.'”

MAJOR CASTING CHANGES | Given the shift to 1600 Pennsylvania Ave. — and the 10-episode order, which is less than half the length of a normal Madam Secretary season — some changes needed to occur. The McCords’ luxurious Georgetown home was dismantled, and the White House sets were expanded. Kevin Rahm, who plays Elizabeth’s canny adviser Mike B., was promoted to series regular, which reflects Mike’s increased influence in the season; likewise, Erich Bergen’s Blake has been given an important new position in the McCord administration.

But there are several Madam Secretary standbys who will no longer have much of a presence in Elizabeth’s inner circle. In addition to Sara Ramirez’s previously reported change in status at the show, Sebastian Arcelus (who plays Jay), Geoffrey Arend (Matt), Kathrine Herzer (Alison), Evan Roe (Jason) and Keith Carradine (President Dalton) will no longer be series regulars when Season 6 premieres. 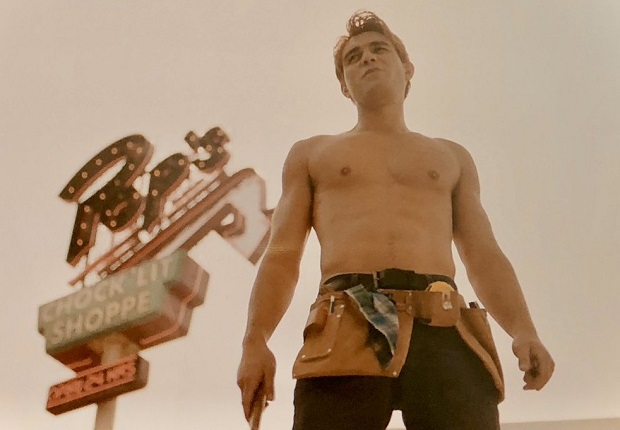 “The decision I had to make was, what characters need to be most prominent in [Elizabeth’s] new division and her world?” Hall says. “It’s such a different world that some of the other [characters’] jobs were not translated into what we wanted for her, and the kids aren’t really at home anymore.”

Both EPs stress that we’ll see many, if not all, of the sidelined characters at some point during the final season; Carradine, for example, already has shot at least one episode, and other appearances will depend largely on the actors’ schedules. “We do want everyone to be present in the show and are inviting them to be, so we’ll see,” Hall says, adding that the writers’ room hasn’t yet broken story beyond Episode 5. 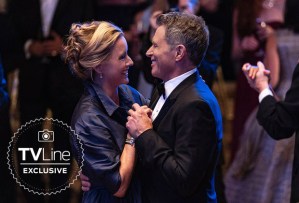 MEET FGOTUS | The show’s final premiere (Sunday, Oct. 6 at 10/9c) picks up with President McCord nearly two years after the events of the Season 5 finale. She’s just shy of her first hundred days in office, and we’ll soon watch her face pressing issues like the use of unmanned military drones, the mercurial attitudes of the American public and, y’know, the simple fact of being the nation’s first female commander-in-chief.

“We’re peeling back the difference when a female is in power versus when a man is in power,” McCreary notes. (Anyone else itching for the moment Elizabeth and fictional Philippine President Datu Andrada are in the same room again?) “Sometimes those things go unnoticed by all of us, and we’re really going to take a moment to point it out to the audience.”

Where’s Tim Daly’s Henry during all of this, you might wonder? The newly minted First Gentleman (by the way, that’s the actual title — “I thought it was First Man, which is creepy,” Leoni says, laughing) will have a full roster of duties… but don’t expect “picking new window treatments for the China Room” to be high on FGOTUS’ list. “Every First Gentleman or First Lady has their cause,” McCreary previews, adding that Henry’s efforts will be aligned with the first major piece of legislation that Elizabeth will get passed. “It fits seamlessly with Henry’s character from the last five seasons,” she adds. “He finds such depth of resonance with the kind of things that this office can allow that he’s going to make the most of it.”

Along those lines, both Hall and McCreary note that it’s a privilege to tell the story of the first woman to serve as United States president, and they’re not going to squander a moment of the show’s final run.

Before the finale goes to black, McCreary teases, expect to experience “our top three fantasies of what will happen when a female becomes president.”