Superstore‘s finest are ready to take out the competition in new key art for Season 5.

In the exclusive poster below, a bat-wielding Amy leads the charge against a new Cloud 9 “helper.” She is joined by her boyfriend Jonah, as well as Dina, Garrett, Cheyenne, Glenn and even Mateo, who we last saw being hauled away by Immigration and Customs Enforcement.

Last but not least is Sandra, played by newly promoted series regular Kaliko Kauahi. The frequently down-on-her-luck employee is armed with hedge clippers, which we assume are meant to inflict harm on the robot and not her mortal enemy Carol.

The Season 5 premiere is expected to pick up in the immediate aftermath of the I.C.E. raid. Meanwhile, at San Diego Comic Con, series star America Ferrera suggested that the Jonah/Amy relationship will play a “big part” in upcoming episodes.

As previously reported, Superstore will be under new management this fall. As part of a new overall deal with Universal Television, creator Justin Spitzer has relinquished showrunner duties to longtime EPs Gabe Miller and Jonathan Green.

Superstore returns Thursday, Sept. 26 (NBC, 8/7c). In the meantime, scroll down for a first look at the new poster, then hit the comments with your hopes for Season 5. 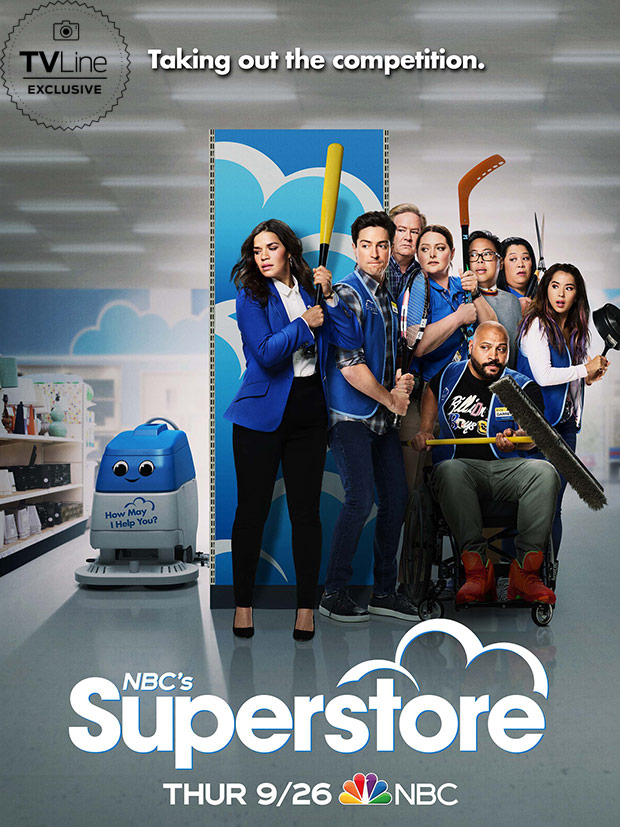