A long time ago, we used to be friends with a spunky blonde teen detective who handily solved cases and doggedly righted wrongs.

But it’s been a while since we’ve hung out with Veronica Mars and her gang on a regular basis. What sweet relief, then, that Hulu’s eight-episode revival of the neo-noir series — slated to drop on Friday, July 26; I’ve seen the whole thing — makes it feel like no time has passed since our last visit to Neptune, Calif.

As the show’s fanatical Marshmallows know, the series’ original run chronicled Veronica’s high school and early college years, then the 2014 film checked in 10 years later. Two Veronica Mars novels — which are cannon and are referenced in the revival — followed our heroine as she returned to full-time sleuthing in her coastal California hometown. 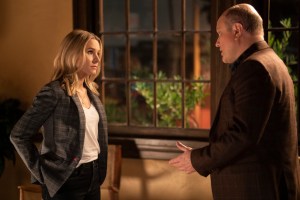 As the new season picks up, Veronica is firmly reestablished in Neptune, working alongside her father Keith at Mars Investigations. She’s also living with her high school tormentor-turned-sweetheart Logan. And because all of this is broadcast on a streaming service instead of network TV, the revival is saltier (Veronica swears, but in a very on-brand way) and sexier (again, nothing jarring) than the original episodes were.

The season’s central mystery — who’s bombing popular Spring Break locations, and therefore messing with the local economy’s biggest week of the year? — is very much of a piece with Seasons 1 through 3 and the series’ recurrent theme of the haves versus the have-nots. When Mars Investigations is hired by the influential family of a man injured in one of the explosions, Veronica is thrust into the center of the latest class-warfare skirmish.

Good thing Kristen Bell is such a ball of snarky sunshine, as comfortable and winning in the role as she was 15 years ago. The girl we met sitting outside Neptune High is definitely there still, but Veronica has gone through a lot since her best friend was murdered back in the day. Bell uses every bit of those in-between years to give her alter ego a wariness that brings out her rougher edges. At one point, when a man in a position of power is ashamed because he was caught in some online sexual shenanigans, Bell instantly turns Veronica’s been-there-seen-that attitude into a very of-the-times anger: “He’s not even within p—y-grabbing range,” she rails. “Who even cares anymore? I thought that’s what we’re all learning: Nothing matters.” Translation: This detective isn’t hard-boiled yet, but she’s getting there. 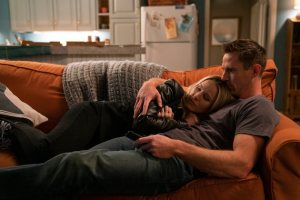 Nowhere is this edgier Veronica more apparent than in her relationship with Logan (a charmingly subdued Jason Dohring, who finds new depths via his character’s hard-won chill). Veronica’s inability to trust completely was understandable when she was a teen; as an adult, you kinda just want her to go to therapy — and kudos to the writers and Bell, who don’t shy away from showing us how, in some cases, Veronica’s biggest adversary is herself.

In Veronica’s defense, it’s not like no one is gunning for the tiny blonde one, who has annoyed like the wind so long that she’s got plenty of enemies in Neptune. The revival adds a sly ex-con (played by Counterpart‘s J.K. Simmons) and some Mexican assassins (Westworld‘s Clifton Collins Jr. and Gilmore Girls: A Year in the Life‘s Frank Gallegos) to their ranks. Patton Oswalt (A.P. Bio) also joins the cast as a true-crime-obsessed conspiracy theorist named Penn Epner; one of the few drawbacks over the eight episodes is that it would’ve been nice to spend less time with these new characters and more time with the original ensemble. Percy Daggs III’s Wallace, for instance, has a pretty small on-screen presence in the revival, especially given that he was once Veronica’s best and only friend.

We do get significant arcs for both Enrico Colantoni’s Keith, whose on-screen back-and-forth with Bell is as perfect and natural as ever, and the criminally underrated Francis Capra’s Weevil, who gets more interesting in every Veronica Mars iteration. (If there’s another season, Weevil as part of the A plot, please and thank you?) 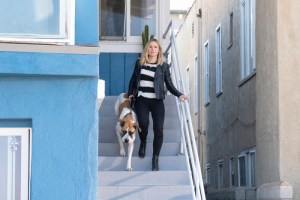 On that note: Creatively speaking, there very well could — and should — be another batch of Veronica Mars episodes in the future. At no point in the eight episodes did it feel like series creator Rob Thomas had run out of story, and Bell herself has said that she’ll play the part as long as fans clamor for her to do so. No spoilers, but given how the season finale ends? That’s a very intriguing and welcome possibility.

THE TVLINE BOTTOM LINE | Veronica Mars‘ story is strong enough to span years and continents, and the revival’s return to her world is time well-spent — case closed.