Veronica Mars quite literally has no f-cks to give — and now we know why.

As TVLine previously reported, Hulu forbid Kristen Bell’s subversive title character(or anyone else in the Mars universe) from dropping an F-bomb during the eight-episode revival, which premieres July 26. Given the streaming world’s looser standards, and the likelihood that a character such as Veronica would use such language, the mandate was perplexing to say the least.

“I actually understand Hulu’s decision,” series creator Rob Thomas admits to TVLine. “They bought [streaming rights] to all three seasons of Veronica Mars. And because those three seasons are built to appeal to younger people, they want them to be able to watch the first three seasons [seamlessly] with Season 4. That was their thinking on it.” 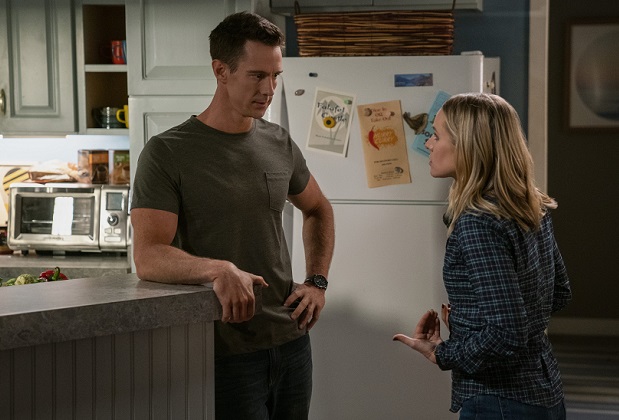 But similar to how Bell’s other TV gig, NBC’s The Good Place, found a humorous workaround to the no-cursing obstacle, Veronica Mars‘ fourth season plays the moratorium for laughs. “Do not underestimate Rob Thomas’ ability to take a road block and throw a joke in its face,” Bell tells TVLine with a smile. “He created an incredibly funny scenario involving Veronica and Keith that allows us to get around saying ‘f-ck.'”

For the record, Bell maintains that she is a big proponent of foul language. “No one who hires me wants me to swear,” she sighs, “And I’m like, ‘F-ck that.’ I have no problem with cursing. I know some people don’t care for it — like my mom — and I fully respect that. But, personally, it only offends you if you let it.”