Now that ABC has “fully and finally cancelled” Whiskey Cavalier — and before the window of opportunity closes for the network to rethink another of its more dubious decisions — may I suggest that it make haste and un-axe The Kids Are Alright?

In the interest of full disclosure, I’ll admit upfront that I’d implore ABC to reconsider dumping the 1970s-set series even if it didn’t make (dollars and) sense to do so. Tim Doyle’s sweet, tart comedy is the rare show that’s considered must-see TV by my entire household, a veritable Whitman’s Sampler of viewers that ranges from Deadliest Catch fans to Game of Thrones devotees. For us to agree on anything, much less anything TV-related, is as rare an occurrence as Kids’ straight-arrow Frank seeing eye to eye with sneaky Joey.

But the fact is, a renewal for the show is — or should be — a no-brainer. In the coveted 18-49 demo, it finished its freshman season well ahead of black-ish, which was renewed, and way ahead of Fresh Off the Boat, which (much to Constance Wu’s chagrin) was also renewed.  Kids also came in third overall (and first among ABC’s comedy casualties) in the recent TVLine poll that asked viewers which cancelled series most deserved to be saved. 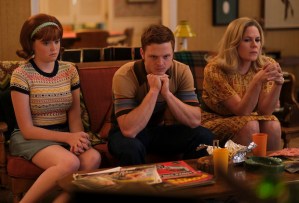 To anyone who’s tuned in to the show, that last bit will come as no surprise. Kids isn’t just a gem, it’s a polished one that’s served Mary McCormack what may be the role of her career in Peggy Cleary, a mother of eight whose reluctance to indulge in love that isn’t tough has as much to do with her big heart as it does her huge family. And I could say something just as nice about every last member of the cast, from Caleb Foote, who elevates goofiness to an art form as Eddie, to little Santino Barnard, who makes next-to-youngest son Pat such an endearing weirdo.

And I — all of us who’ve watched Kids — want to see what happens next, in Peggy’s evolution through her friendship with Eddie’s independent-minded girlfriend Wendi, in Lawrence’s romance with an older woman, in Timmy’s pursuit of fame and fortune. Well, in his pursuit of fame, anyway. (Ventriloquism, we fear he’ll find, isn’t exactly a cash cow.) Above all, we want the forward-thinking nostalgia trip to last long enough to usher in the “changed, more accepting world” that was promised by its premiere. So hurry up, ABC, and do right by Kids — and its enthusiastic fan base — before your options on the cast expire in June.

What do you think? Shouldn’t ABC allow Kids to grow up? Hit the comments.