“Yeah!” she shouts. Christie is calling from London, but her enthusiasm is so strong and her estimation of her character so sure, we’d probably be able to hear her all the way across the Atlantic even without the phone. She laughs. “A hundred percent!”

It’s two days after Thrones‘ polarizing series finale, but it’s the first time we’ve spoken to Christie since the HBO series’ final season began. And given how many pivotal developments took place for Brienne over the final six episodes, we couldn’t help but start the conversation with a throwback to when she was knighted on the eve of the Battle of Winterfell. (Don’t worry: We’ll get to the bedding and the deserting and the journaling, too.) Read on for Christie’s thoughts, starting with Brienne’s moment of pure joy in Episode 2. 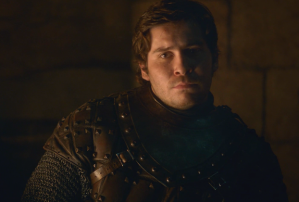 TVLINE | One of the things that stood out for me this season was in the knighting scene, there was a wordless back-and-forth between Brienne and Podrick, between you and Daniel Portman. How much of that was spelled out in the script?
Some of it was in the script. Bryan Cogman wrote that episode, actually, and he really crafted that scene. He has been in charge of much of the storyline of Brienne of Tarth, so he knows the character as well as I do. Those moments were in existence in the script. But certainly the bond that Daniel and I have had from working together and that evolving relationship, which is a very quiet relationship but an incredibly strong one, it’s natural now that when we’re in a scene together, that we would look at each other. We wouldn’t often have to be directed, because we knew what the other one was thinking — and also because Daniel is such a brilliant and intuitive actor that he would always respond. And he’s very supportive.

David Nutter was so brilliant that day [we shot the scene]. He’s really an actor’s director, and he works really hard to coax a performance out of everybody. Everybody feels happy but they’re engaged with the scene and very connected to the scene. And it’s a light and wonderful atmosphere. We just all responded to each other. I thought about the scene in such great detail because I was touched by it and because I thought it was a great thing to happen for Brienne. And I was surprised that she got what she wanted. As we’re used to so often in Game of Thrones, you know, nobody gets what they want. But she gets what she wants and it’s such a rare form of approval and such a detailed thought process that goes on with regard to something that you never thought you would receive so you’ve decided that you don’t want it, you don’t want to be a part of it. You don’t need to: You’re doing it on your own terms.

What I learned from that scene, and what I think Brienne learned in that moment, is that acceptance is an extremely beautiful thing. And recognition is really extraordinary and even though she told herself for so many years that she didn’t need either of those things, actually, acceptance and recognition is the kind of love that she’s never had arriving, all at once. It’s about her achievements and the way in which she’s chosen to live her life, living a life of honor.

Game of Thrones: 7 Characters Who Would've Made Better Rulers Than Bran 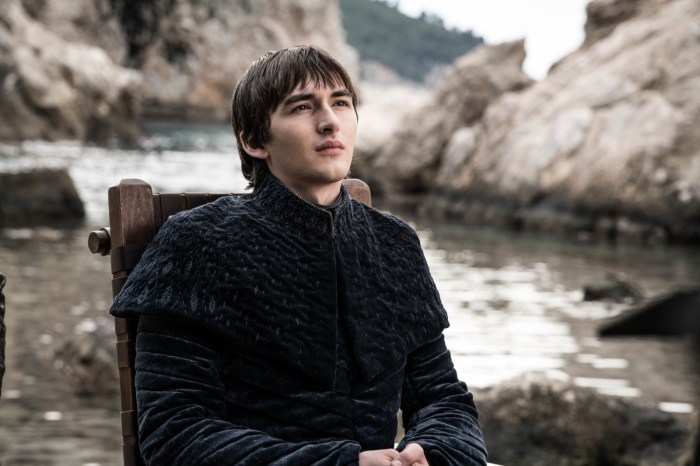 TVLINE | It’s also coming from one of the people who had mocked her the most over the course of the series. Having that turn of events, I imagine, also was significant for her.
Hugely, because a man who was the antithesis of Brienne of Tarth — George R.R. Martin talked to me about how he saw it as the reverse of Beauty and the Beast. It’s also incredibly interesting to me, the idea of the classic patriarchal tale of the beautiful knight in shining armor who comes along, but in this instance, he came along and he did his best to demoralize and disable Brienne. And instead, it’s her who transforms him. And in that moment, she looks at someone who knows her incredibly well, possibly knows her the best out of everybody, and chooses to use their power to bestow this honor on her. She looks at him and she sees all of those experiences that they’ve had together that have ripped her open and have changed her and forced her to adapt and to embrace her strengths of not just who she is physically, but also morally and emotionally. It’s a very powerful moment.

TVLINE | The sex scene between Brienne and Jaime was rather chaste, by this show’s standards. Was there any discussion about that ahead of time?
I’m not sure. The day was quite a blur in the way those days are on Game of Thrones. But I don’t think we needed to see anything more than that, really. I think that the intimacy we’ve had already, when we’ve seen all of the nooks and crannies of their relationship and how they react to each other. And they’ve been naked together, physically and emotionally, in the bathtub scene in Season 3. They’ve had to communicate fairly honestly with each other, if not with words, certainly energetically it seemed very obvious. They’ve been very clear in acknowledging each other’s intentions. To me, that’s what was on the page, and I didn’t feel that we needed any more. Any more there would remove the spiritual aspect, which I felt was delivered from that moment of those two energies coming together. 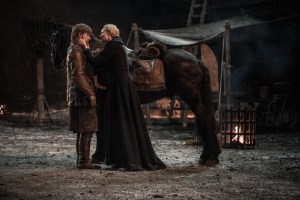 TVLINE | After Jaime left Brienne weeping in Winterfell’s courtyard at the end of Episode 4, a lot of my female friends were angry and felt that her character had been reduced to crying over a boy. But it made sense to me that, after making herself so vulnerable and having her heart broken, Brienne would respond the way she did. What’s your take on the notion that the scene somehow made Brienne a weaker character?
I don’t know where the strength always is in suppressing one’s emotions, particularly a woman who’s demonstrated such extraordinary physical strength and extraordinary moral strength. And Brienne chooses to have sex with Jaime Lannister. In that moment, in the scene, what I thought was so useful about it was that it’s so clearly marked: There’s a moment where she chooses to be in charge and to take control of her own life. Throughout the series, we haven’t seen Brienne act on her own impulses very often. She’s not a self-serving character. And she chooses to do something for herself.

Unfortunately, that doesn’t work out. But who knows what it was that she really wanted or would’ve wanted? Because it’s Brienne’s first sexual experience. It’s also the night after the biggest war their world has ever seen, and they have survived it. I think that we see the final element of that character in three dimensions, which is a total emotional connectivity. And no one could be blamed for crying over pain of someone leaving you. I don’t think it makes you less of a person. I don’t think it makes you a weaker person. I think it makes you incredibly human. To be able to recognize those inconsistencies in one’s personality does not just show the strength of character, but shows a strength in the character, in the writing of the show. Because we have seen so many different aspects of Brienne. There, we didn’t see her just in service of an idea bigger than herself. We saw her as a human being. 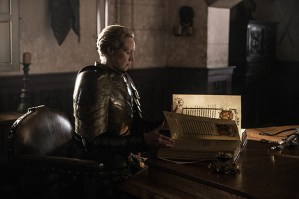 TVLINE | At the end of the series, Brienne’s hard work has been rewarded. She’s the head of the Kingsguard. When we see her finishing Jaime’s page in the White Book, do you think she’s made her peace with what he’s done?
What I like about it is that she, at that point, already has been made Commander of the Kingsguard. So she has gone on with her life and she has, amazingly, achieved exactly what she wanted from the very first episode of Game of Thrones. In the first episode where we’re introduced to Brienne in Season 2, she is fighting — and besting — the Knight of the Flowers, Ser Loras, played by the wonderful Finn Jones, in order to become part of Renly’s Kingsguard. We see in the final episode that she achieves that. Again, it’s part of this extraordinary character and ability that she has to do the decent thing.

Jaime Lannister was someone who knew her the best. She had the strongest and most intimate relationship with [him], out of everybody. And she also was one of the few people to see who he truly was, and the extent of the sacrifices he was prepared to go to for good, amongst all of his other complexities. [Laughs] I found it very heartening that she chose to do that. I’m sure it was about having a love for someone that she had deeply respected and was close to. She used her power in a positive way.

Can I tell you what I really love? I love Brienne’s final line in Game of Thrones, which is, “I think ships take precedence over brothels.” I was very happy with that. [Laughs]

TVLINE | I do love that the woman who had worked so hard and stayed so true to her ideals was sitting at that leadership table with at least one male who had just fallen into his position.
[Laughs loudly] Holding up a mirror to life!