Looks like Ray Charles was right: Knight time really is the right time to be with the one that you love.

Sunday’s Game of Thrones contained many interludes that we’re still trying to process. But there’s one moment that made so much sense that we recognized and welcomed it the minute we realized it was about to happen: Brienne and Jaime’s love scene. (Read our full episode recap here.)

In the beginning of Episode 4, Brienne and Jaime both got rather intoxicated during a post-Battle of Winterfell victory feast. During a particularly revealing round of a drinking game that Tyrion made up, in which participants tried to guess personal secrets about one another, Tyrion guessed that Brienne was a virgin — and the game abruptly ended there, after a sheepish Brienne excused herself to use the bathroom (much to Tormund’s chagrin).

Jaime then followed Brienne to her quarters, and their slightly uncomfortable banter in front of the fire soon gave way to a rather intimate scene. “[Tormund] was very sad when you left,” Jaime informed Brienne, prompting her to respond, “You sound quite jealous.” (And Jaime agreed that he did.)

Then, after remarking that the roaring fire had made Brienne’s room rather hot, Jaime removed his shirt, then helped Brienne do the same.

“I’ve never slept with a knight before,” Jaime quipped, to which Brienne replied, “I’ve never slept with anyone before.” Seconds later, Jaime brought her in for a passionate kiss… and the next time we saw them a few scenes later, they were lying in bed, and Brienne’s previous statement was clearly no longer accurate.

“The Jaime/Brienne relationship has always been fascinating to us because they’re such dissimilar characters, and yet there’s a real chemistry between them,” executive producer David Benioff said in a behind-the-scenes featurette for Episode 4, which you can watch above. 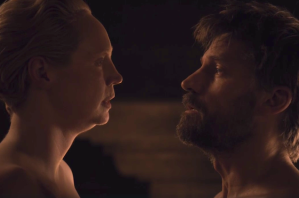 Regarding Jaime and Brienne’s decision to finally be intimate, exec producer D.B. Weiss added, “Even as drunk as they both are, it’s impossible for them to confront what they’re doing with words, even as they’re doing it, until the very end of the scene. The vulnerability that they show runs very counter to who they are as people.”

Unfortunately for Brienne (and for the ‘shippers among us), their romantic relationship was short-lived. Despite Brienne’s tearful protests, Jaime took what Weiss calls a “long, uncomfortable look at who he really is” and opted to return to King’s Landing — and to Cersei — ahead of the final battle that awaits his sister.

“As much as Jaime cares for Brienne and admires her and loves her, he’s got almost an addiction to Cersei that he just can’t break,” Benioff said. “Even though he’s given it a chance at happiness and some kind of different life for himself, he can’t take it. He makes the choice to go back to Cersei.”

In case you’re a new viewer, allow us to explain exactly why this particular coupling was such a big deal. And if you’re a seasoned Thrones fan, lay back and enjoy the ride down memory lane. Back when Brienne was working on Catelyn Stark’s behalf, Jaime was Robb Stark’s prisoner. Catelyn charged Brienne with taking Jaime to  King’s Landing to trade him for her daughters Arya and Sansa, whom Catelyn believed Cersei was holding captive.

So Brienne accompanied Ser Jaime, who never missed an opportunity to insult her, poke fun at her looks or remind her that Renly Baratheon had been murdered on her watch. But along the way, a grudging respect began to grow between the pair. Jaime lost his sword hand as a result of stepping up to stop Locke’s men from raping Brienne. In the baths at Harrenhal, Jaime confessed to Brienne that he’d actually killed Mad King Aerys to save King’s Landing and his own family from death. Later, Jaime gave up his own freedom to jump to Brienne’s aid when she was mocked and tossed into a pit to fight a bear… and that was all back before Season 4!

In the time since then, Brienne and Jaime have developed the closest thing to friendship either of them have had — and though the show has had some fun with whether or not the fighters have feelings for each other (Cersei’s question at Joffrey’s wedding, Bronn’s to-the-point musing outside Riverrun), the closest thing we’ve gotten to consummation was the emotionally intense scene earlier this season when Jaime made Brienne an official knight on the eve of the Battle of Winterfell.

Anyway, we know we watched it, but we’re still in a little bit of (happy) shock about Jaime and Brienne’s hook-up… before the other shoe dropped, that is. Before the afterglow fades, watch the Episode 4 featurette above, then hit the comments with your thoughts about the big scene!