There weren’t enough sedatives in all of Seattle to get us through the Season 15 finale of Grey’s Anatomy without having palpitations! Thursday’s “Jump Into the Fog” included not one but two declarations of love, three firings, one possible breakup, one definite makeup, a new character making her debut and an old character… just… um, vanishing into the mist. Who was who? Read on and find out! 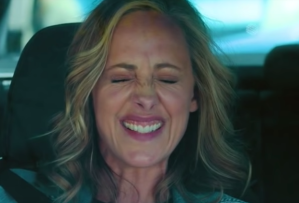 ‘CAN WE SAVE A LIFE FIRST AND TALK AFTER?’ | Picking up where “Drawn to the Blood” left off, “Jump Into the Fog” began with Meredith revealing Jo’s debilitating secret to Alex in the hyperbaric chamber and telling him that his wife was ready to get help — more help than either of them could provide, as much as they might want to. On the freeway, Owen carried a petrified Frances through the wreckage to hitch a ride to Grey Sloan on a fire truck. And Amelia and an in-labor Teddy realized en route to the hospital that they could’ve been friends in another life. “Why not just decide to be friends in this one?” Amelia suggested. Sure, she still loved Owen a little. But, she was quick to add, she fell in love at the drop of a hat and would probably love somebody else by the time Teddy’s baby had made her debut! (Good news for Link, it sounded like… )

‘YOU DATED MY OB AND YOU DIDN’T THINK TO MENTION IT?’ | At Grey Sloan, Bailey and Catherine informed Luis and Gabi that the little girl’s cancer was only Stage 2 and that Catherine’s foundation would cover all the costs of her future treatment. (Gee, where was that solution when Mer was committing insurance fraud?) In other patient news, Carrie’s hand twitched (hurrah!), and Frances’ blood restored Gus’ interest in Legos, the surest sign that he was going to be just fine (double hurrah!). After Teddy got over Amelia’s accidental revelation of Owen’s fling with Carina, the mom-to-be was glad that he was there for the birth of their daughter — especially when, to distract from her labor pains, he confessed, “I’m in love with you, and I’ve been in love with you since the day I met you.” If she’d let him, he wanted to spend the rest of his life proving that he was worthy of her love. And they were already so in sync that they announced little Alison’s name in unison. Of course, all I could think of was our poor, poor Tom, who at that very moment was all alone using his million-dollar hands to build Teddy a crib! 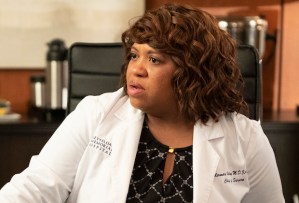 ‘YOU’RE TURNING INTO SOMEONE NOBODY WANTS TO WORK WITH’ | Meanwhile, after a tongue-lashing from Link over his increasingly crummy attitude, Nico admitted to Levi that he missed him, and the two of them not only ended the episode snuggling up in front of My Girl, but Schmitt introduced his boyfriend to his mom as exactly that. (#schmico forever!) Thankfully, Mama Schitt took the revelation in stride and even gave the bad-day chicken soup that she’d made for her son to his bummed-out beau. Back at Grey Sloan, Meredith, Alex and Richard all tried to claim responsibility for the insurance fraud that DeLuca had lied that he’d committed. In fact, “the only person it wasn’t,” Karev said, “was Andrew DeLuca.” Left with no other choice (and her blood pressure surely skyrocketing!), Bailey fired all three of them on the spot! 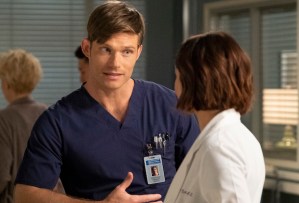 ‘I NEED TIME’ | Before turning herself in to the police, Mer paid her jailbird boyfriend a visit during which she told him, “If we’re gonna be together, you’re gonna need to develop some instincts for self-preservation” and not pull such gallant, boneheaded moves. What’s more, “as stupid as [your gesture] was, and as much as this terrifies me,” she added, “I love you, too.” For a scary second at day’s end, it looked like Amelia might write off Link as a rebound. “You definitely were” one, she admitted. However, she wasn’t sure that he still was. So if she didn’t have to make any longterm commitment right then and there, and could discover who she is without Owen, “I’m open to possibilities,” she said — including Link. And prior to checking in to Grey Sloan for inpatient treatment for depression, Jo reassured Alex that she loved him and was sorry for how she’d behaved. Which seemed like only a fragment of a much bigger conversation that they were overdue to have.

‘MAYBE I MISSED OUT ON SUMMER CAMP, BUT YOU MISSED OUT ON A SUMMER JOB’ | Finally, while all of this was going on, Maggie and Jackson hiked toward their SUV in the woods and had the talk that they’d needed to for a while now — the one in which she pointed out how patronizing it was when privileged “Mr. Monopoly” suggested that she didn’t know her own likes and dislikes, and should allow him to introduce her to things he thinks she’s missed out on. In the end, he felt that she didn’t respect him, and she felt (as have some of us!) that, while he loved her, he fundamentally didn’t like her as she was. When they got stuck in the fog heading back to the city, Jackson got out of the SUV to look around and… that was that. He never returned, so Maggie was left in the fog and in the dark calling out for her possibly-now-ex-boyfriend.

So, what did you think of “Jump Into the Fog”? Grade the episode below, then click here to read showrunner Krista Vernoff’s take on the finale (and find out what she was willing to say about Season 16).