Thursday’s penultimate Grey’s Anatomy of Season 15 was a “Wham, bam, thank you, ma’am!” kind of episode — heavy on the Wham! Not only was another character (besides Owen) ready to declare their love, but Jo finally opened up about Pittsburgh (though still not to Alex), one doctor appeared poised to hang up their stethoscope, and another looked like they were leaving the O.R. for prison. How’d it all shake out? Read on…

‘IF ANYONE CAN HELP, IT’S MEREDITH’ | As “Drawn to the Blood” began, Meredith awakened in bed with Jo after a nightmare in which Cece featured prominently, Amelia awakened to find that ack! She and Link had fallen asleep post-nookie. And since her nieces and nephew had “just found out about Mer and DeLuca,” she said, “I’m not gonna spring someone else on them” — even if he had to pee! Finally, Maggie awakened in a tent with Jackson and was forced to admit that OK, camping “is not hell.” (At least it wasn’t yet.) At Grey Sloan, Gus’ condition had deteriorated so much that he no longer even played with Legos. Luckily, a blood donor was being flown in from England. “Don’t break her and don’t spill her,” Alex told Levi, who was charged with retrieving Frances from the airport. He should have added, “And don’t let her therapist be dragged off by customs over some question about his visa,” because that was exactly what happened, leaving poor, agoraphobic Frances scared to get off the plane. Upon hearing that there was yet another holdup, Gus’ mom Lori had a full-on Lego-scattering meltdown… after which husband Scott slipped on a Lego and badly hurt himself. “Can you even break your ass?” he cried. And not only could you break your ass, that was exactly what he’d done.

Hearing of the difficulties getting Frances to Grey Sloan, Owen leapt into action and, once he’d arrived at the airport, found her aboard the plane singing “Wake Me Up Before You Go-Go” to calm her nerves. She really, truly wanted to help Gus, she explained. But good God, no, she wouldn’t let Owen draw her blood right there on the plane. “You could stab me wrong,” she feared. She needed to be at the hospital… only she couldn’t get there, because she’d been taught from an early age that, owing to her extremely rare blood type, if she was injured, she could die. Eager to embolden Frances, Owen tried to introduce her to Gus via FaceTime, but since the boy had just suffered a heart attack, he couldn’t even speak. In the end, Frances allowed Owen to carry her off the plane to the car. “You will not break,” he promised her in such a way that Teddy got all starry-eyed as she listened in. (Ruh-roh.) Even then, it wasn’t smooth sailing, this being the last episode before the season finale and all. As Alex had Gus moved into the hyperbaric chamber to get more oxygen to his organs, the car taking Frances, Owen and Levi to Grey Sloan got stuck in traffic. (Can you imagine? Cause of death: traffic congestion.) 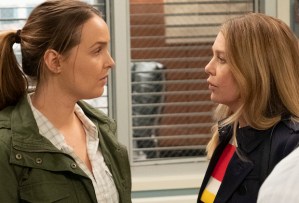 ‘DO YOU LOOK LIKE A RAPIST?’ | At Jolex’s place, Mer admitted to Jo that maybe in part she was sleeping there because DeLuca had said he loved her “out loud, to my face, and it’s terrifying. That doesn’t mean I’m not mostly here for you.” When Jo got snippy about Mer complaining about love, Grey reminded her that the last person who’d said he loved her had died. So “I’m not a delicate flower.” As for Jo’s unwillingness to reveal what happened in Pittsburgh, Mer and Alex had both had parents who’d messed with their heads nine ways to Sunday, “so there isn’t anything that we wouldn’t understand.” Oh no? said Jo. “Was your mother raped by your father? Is that why you exist? Do you wear his face? OK, then.” Well, she was awfully nasty about it, but at least she’d finally told someone. Later, Jo suggested that she never should have existed in the first place, so what Paul had done to her, “that was my birthright. That was my inheritance.” In response, Mer rattled off just a few of the things that would never have happened if Jo hadn’t come into being. For one, Alex would still be “evil spawn”!

Little by little, Mer got through to her friend. The way Jo came into being, what she went through with Paul, it didn’t define her, “it’s something you survived,” Mer said, “because you are the opposite of that. You’ve taken all this darkness and used it to help other people who are facing the same.” As the uplifting music kicked in, you could tell that Jo was at last coming out the other side of her crisis. To ensure that she made it all the way out that other side, Mer told her about a moment after she’d fallen into the sound, when she’d thought, “Why fight?” And she hadn’t fought. “The only reason I’m here is the people who love me didn’t give up on me.” So was Jo telling her that she wanted to stop fighting? Or was she just saying that she wanted to spend a little more time under the covers? “I don’t wanna stop,” Jo answered. But she did want some more time to come to grips with what she’d learned. So they’d go to Grey Sloan and talk to Bailey and Alex, said Mer. They’d get Jo a proper leave of absence and make sure that her career was waiting for her when she came back. 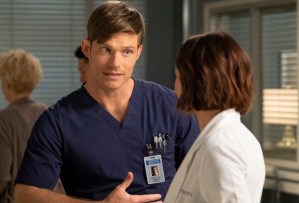 ‘IT’S KIND OF NICE SEEING YOU IN YOUR ELEMENT’ | In the woods, Jackson led Maggie on a hike to a spot he wanted to show her that he’d found the last time he went camping. To propose perhaps? We never found out, because along the way, Maggie was bitten by something and sprained her ankle. By the time they got back to their campsite, she’d gotten a zillion pages regarding Gus; they had to get back to Grey Sloan, stat. Back at the hospital, Richard and Nico worked on Scott’s broken coccyx. When Taryn asked to scrub in on the amusing procedure, Nico shut her down hard; there was nothing funny about it. Only there was, said Richard, adding, “If we don’t find some lightness in this darkness we face every day, no one would stay in this job.” Nico’s response — a terse “Thank you, sir” — suggested that he might just be performing his last procedure. Nearby, everyone wondered what the big foundation meeting Catherine and Bailey were attending was all about. “My money’s on a mountain of new funding,” Link told Amelia when they weren’t worrying about Carrie, who still had no tingling in her fingers. How, Amelia asked, did he not always assume the worst? He’d already been through the worst, he replied. And “life’s gotta give you some good apples along with the rotten ones, right? For balance.” Amelia was skeptical. “But I like my theory,” he said. “Works for me.” Cue rotten apples coming his way in 3, 2…

Carrie not only had pneumonia, she had pneumonia that was so bad, Teddy was going to have to remove a lobe of one of her lungs. Hearing this, Toby flipped, prompting their mom to give a speech about how they’d inspired her with their fearlessness. There is no life without risk, Carrie concluded as Teddy got that starry-eyed look again. (Don’t do it, Teddy. Nooo!) When Link shortly thereafter caught up with Amelia and filled her in, she was taking Leo “home” to Owen’s. Uh, what was up with that? he wanted to know. He’d been fine with them being each other’s pain management until it had started to feel like something real — at least it had for him. Had it for her? She didn’t have to give him an answer that very second, he said. But he would need to know. He wouldn’t be hanging on to a situation that was guaranteed to bring him pain. And speaking of pain, Tom was being his sweet self with Teddy when she began looking at him a little oddly. Next thing we knew, she’d taken off to “go take care of something.” Crap. She was gonna do it. When she arrived at Owen’s, Amelia opened the door with Leo in her arms. “Did I just open a time portal?” asked Teddy. “Are you two back together again?” Upon hearing that Omelia hadn’t recoupled, Teddy was relieved, because she’d realized that she loved Owen. Tom makes her laugh and feel safe, she said, but he doesn’t make her feel passion or rage or ecstasy. “Owen is the only person who has ever done that for me.” And she was determined to tell him before giving birth… which was gonna be tough because her water had just broken! 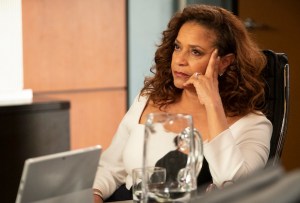 ‘DON’T YOU THINK YOU’D KNOW IF YOUR WIFE WAS SELLING THE HOSPITAL?’  | After Mer charged DeLuca with babysitting Jo while she joined Alex in the hyperbaric chamber with Gus, Bailey called Andrew into that big meeting. Turned out, the suits were inspectors for the hospital’s insurer — Mer’s fraud on Gabi’s behalf had been discovered. (Well, that didn’t take long!) Only we soon found out that no one in the room was aware that Mer had committed the fraud. So DeLuca did something rash and heroic and dumb. When he appeared in the window of the hyperbaric chamber at the end of the episode, he “informed” Mer that he’d put Ellis’ name on the insurance paperwork so that Gabi could have her surgery. But “it’s all been cleared up,” he added as Catherine looked on. “I got caught.” He was on his way to the police to report what he’d done, then he’d take his lumps and go to prison. Holy crap, Mer basically said, do not do that. But, of course, the door to the hyperbaric chamber couldn’t be opened, so she couldn’t go after him! And in the last seconds of the episode, thick fog rolled in, slowing Owen, Levi and Frances’ progress to… well, no progress at all. Then a car rear-ended them (or had they hit the car in front of them?), and suddenly, vehicles were crashing all around them. This was gonna be one hell of a finale! What did you think of “Drawn to the Blood”? Are you Team Teddy/Tom or Team Teddy/Owen? Team Link/Amelia or Team Owen/Amelia? Any way you slice it, it’s a pretty fantastic mess, no?