Warning: The following Q&A contains spoilers for Grey’s Anatomy’s Season 15 finale. If you’d rather be surprised when you watch, now would be a good time to look away.

The Season 15 finale of Grey’s Anatomy dropped a lot on us, from Meredith and Owen’s declarations of love (to DeLuca and Teddy, respectively) to Bailey’s firing of three doctors to Jackson’s disappearance (read full recap here). Here to help us process it all — and hint at how the events of “Jump Into the Fog” will impact Season 16 — is showrunner Krista Vernoff, who also wrote the bittersweet hour.

TVLINE | Let’s start with the firings. Obviously, Grey Sloan isn’t really going to lose Mer, Alex and Richard, right?
[Laughs] It was a big swing we took, and I can’t promise that Grey Sloan isn’t going to have to do without those doctors, at least for a while. I mean, they got fired!

TVLINE | What prompted Meredith to tell DeLuca — when he was behind bars, of all times — that she loved him? Was she afraid of what dumb thing he’d do next to prove his love?
I think she told him because she had come to terms in her own time with what her fear [of saying it] was about. I also think, whether it was conscious or unconscious on her part, he couldn’t walk after her to talk about it further, so she could still take it at her own pace.

TVLINE | I was really torn about Owen and Amelia — glad to see them happy but mortified for Koracick. Is there anything you can say to Teddy/Tom fans to make us feel better?
[Laughs] Well, I would say that you can glean from the finale that there’s more telling in that story. We didn’t cut to Tom putting together that nursery for no reason. But the fact is that so often in life, complicated love stories come at a cost. There is collateral damage. We want to believe that love is easy and smooth and perfect, but sometimes we create a bit of chaos in our wake, and that’s what we have here.

TVLINE | There were two conversations I especially loved in the finale. The first was the one in which Maggie stood up for herself to Jackson. It felt like a break-up to me. How about you?
It felt significant, for sure. It did feel like one of those fights that you don’t know if you can come back from. 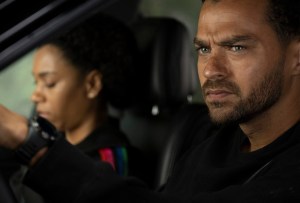 TVLINE | Was she right — that he loves her but doesn’t like her? Was he right that she doesn’t respect “Mr. Monopoly”?
I know from painful experience that love is one ingredient that makes a relationship work, but if you just love each other and don’t like and respect each other, then love alone will not make it last. I think they were kindly and somewhat lovingly acknowledging that he keeps wanting her to expand. And I don’t know that she ever would have called him Mr. Monopoly. I don’t know that she ever sat around feeling like she didn’t respect him, but the way that scene evolved, it just felt like one of those really awful fights that you don’t realize you’re in until you’ve said the thing you can’t take back.

TVLINE | How worried would you recommend we be about Jackson?
[Chuckles] It’s worrisome.

TVLINE | And it seems like the kind of scare that could make her realize, “Oh — even when I was super ticked off at him, I was terrified of losing him.”
That’s exactly right. I am proud of the design of that cliffhanger, because we don’t know if they’re going to make it as a couple or why Jackson disappeared into the fog. It gives us as writers a lot of exciting places to go potentially.

TVLINE | The other talk I loved was between Link and Amelia. It seemed like it was setting us up to get to watch them get together all over again without them having to break up…
That is a possibility, yeah. Amelia shows a lot of maturity in that moment in acknowledging that she does have feelings for Link, but she dove into him super fast. She still has to grieve [losing her relationship with Owen]. As she walked away and the feelings were coming, I think that performance is so beautiful by [Caterina Scorsone]. 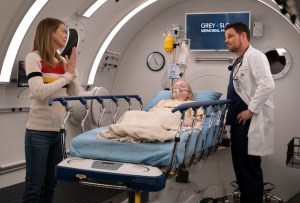 TVLINE | Jo and Alex seemed to get over a hurdle. But I was surprised that Mer was the one who told him about what happened in Pittsburgh, not Jo. Was there a discussion about “Wait, this is Jo’s story to tell”?
Jo feels so broken and is so regretful of the way she’s been treating him, and she can’t find the words [to tell him what she found out]. Sometimes it’s really hard to talk to the person you love the most. And in the penultimate episode, Jo gave Meredith permission to tell him. Jo can’t put it into words — she’s had five episodes to put it into words to Alex, and she can’t do it. And somehow Meredith pushed her to the point where she could voice it, and in voicing it, she began to feel a little better. But she didn’t want to be the one to go tell Alex. I think the messiness of that is very real.

TVLINE | I was surprised — and glad — that you gave Levi and Nico a happy ending for the season, but I’m also worried. We don’t know yet if Nico got that out-of-town dream job he applied for. Have you decided if he got it?
I haven’t decided yet, but I can tell you that Alex Landi will be recurring for us next year. We love him and [Schmico].