This Thursday on The Twilight Zone, Ginnifer Goodwin plays a suburban housewife “who wants to go home.” But as the official synopsis asks, “Where — and what — is home, really?”

This latest installment of the CBS All Access anthology, rebooted by filmmaker Jordan Peele (Get Out, Us) and already renewed for Season 2, serves up a haunting take on immigration and “bystander apathy,” Goodwin says. And to reveal much more would be no fun, though we will note that James Frain (Gotham) and Zabryna Guevara (New Amsterdam) play key roles.

Goodwin, though, had much to share with TVLine about how this emotionally resonant episode left her feeling actually nauseous at times. Plus, the Once Upon a Time alum offers a sneak peek at her other upcoming projects as well as her personal take on husband Josh Dallas’ Manifest mysteries.

TVLINE | Now, I made a point to not finish your Twilight Zone episode, because I don’t want my questions to be colored by knowing how it turns out.
Whoa. But the end is so crazy….

TVLINE | Were you and Josh (parents to a 5- and 3-year-old) ever able to sneak out to a Jordan Peele movie before you did this? Have you seen Get Out? Have you seen Us?
No joke, we saw Get Out twice in the theater. It was obviously that good that we had to see it twice. Us came out right after I shot The Twilight Zone, but we did go see it. We actually had a date night, and it was the only movie we’ve seen in the past year.

TVLINE | Having seen Get Out, did that make you extra-interested in doing one of these episodes?
Oh, this sounds like such bulls–t, but when I got the phone call that it was Jordan Peele’s Twilight Zone, I was like, “I’ll take it.” They said, “Well, you have to read the episode…” I was like, “There is no way that Jordan Peele plus The Twilight Zone doesn’t work.” That is a combination made in heaven, and if he wants me to pick my nose in the background in a doorway, I will do it. 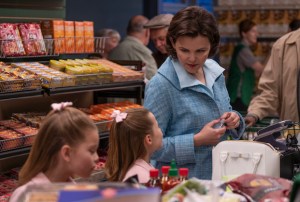 TVLINE | Were you told where this episode was going before you read the script?
Oh, no, it unspooled for me as I read the script, and it made me sick. Like, it made me actually sick to my stomach reading it, and it gave me actual chills. And I have to say that when I left the room where I was reading the script and came face to face with our nanny, who’s from El Salvador, I did not know what to say to her. I was so just thrown by what I had just gone through. What I did end up saying is, “I hope you’ll watch this with me when it comes out.”

TVLINE | I was going to ask if this subject matter “woke” anything within you.
Oh yeah. I mean, I was nauseous by what I was seeing on the news, but there was something about this script that put it in very personal terms for me, because I am white, and I was raised in a very safe bubble of privilege, and my nanny who helped raise my children came from a very, very, very, very different life. Our comparing stories does daily blow my mind. This is a woman that would jump in front of a bus for my kids and give everything to us, and I had to look at her and ask myself, “Do I give you enough? Am I a good enough human to you, to deserve your presence in my life?” It was very jarring for me.

TVLINE | Let’s back up a bit. What do you want to tell people about what this episode, “Point of Origin,” is about?
On the surface, it says something about how we’re treating immigrants and bystander apathy, which you’ll really get when you get to the end of the episode. “Point of Origin” is the name of the episode, but what is “home”? For me, it was a pretty powerful holding of a mirror up to nature, and I’m part of that reflection.  In the first half, this character is so out of touch with the reality of who she is, which was a very fun thing to play. She’s someone who pats herself on the back for having been “decidedly un-racist today,” which is racist in and of itself. She obviously “collects” people of various cultural backgrounds, and uses that to define herself and say, “You know, I have a black friend, so that means….” And that brought up so many icky feelings. Playing her was a dream and made me feel gross all the time.

TVLINE | Did you have a favorite Twilight Zone episode from the past?
I did. I think my favorites are always the ones that everybody loved. I don’t have any obscure references….

TVLINE | Burgess Meredith?
Yes! Oh my gosh, yes, that was my very favorite of all time. I mean there’s nothing better than the moment those glasses break. There’s nothing better. Every Twilight Zone has that “holy s—t” twist. I also loved that one about the department store after hours with the mannequins. And then there was the one with the grandmother who gets her grandson the toy phone. 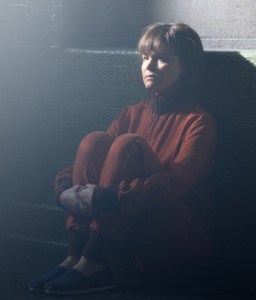 TVLINE | So if I’m only two-thirds of the way through your episode, have I gotten to the “holy s—t” moment? [I explain exactly were I left off.]
I feel like that, for me as an actor, is the “holy s—t” moment, just because that’s where the unraveling begins. But there’s definitely a twist at the end, that we only filmed my coverage of once, thank god, because what I felt in the moment I hope to never feel again. It was maybe the only time in my career that I was like, “I would like to move on and not have to do this again.”

TVLINE | You have a couple of other projects coming up, including the Dolly Parton Heartstrings anthology…
It’s like The Year of My Anthologies. [Laughs] I’m in the episode ”These Old Bones,” which Kathleen Turner and I turned it into a ’40s drama and it was incredible. I was, like, madly in love with Kathleen Turner, madly, and would do everything with her forever and ever, so that was a dreamy experience.

TVLINE | And Marc Cherry’s’ Why Women Kill (for CBS All Access) sounds juicy.
Oh my gosh, I’m doing that now and it is kicking my ass in the best way. Like, I think I scared the EPs the other day because I said, “My brain hurts — and that’s like the biggest compliment I could pay you.” It’s brain-hurting fun. A creative playground, for sure. For one thing, I have been binge-reading plays because I realized Marc’s writing is of another level. I believe very strongly he needs to write a play next, and I would like to be in that play. He is a master of words. Everything is a bit more theatrical and heightened and stylized and poetic and juicy. 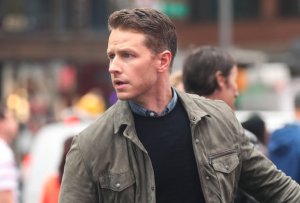 TVLINE | Lastly, I just missed seeing Josh at a party last night. But maybe you can tell me something about the second season of Manifest…?
I mean, he doesn’t know. He hasn’t even seen the next script. He’s ecstatic, though, and they’re going to go back in July.

TVLINE | What is Ginny dying to know about Season 2?
I never let Josh tell me, by the way, what’s going to happen. At all. So I was gutted by the revelation that there is an “expiration date,” a death date. That is going to preoccupy me, so I need to know if this is something that is unchangeable. But I am a committed viewer either way, so if you tell me, “Oh, they’re definitely dying on this day,” it’s not that I don’t want to then see what they’re going to do in their final handful of years. But that is going to be my focus as a viewer!