Pretty soon, Starz will have a Power vacuum: The crime drama will end after the upcoming Season 6, TVLine has learned.

The 15-episode sixth season, dubbed “The Final Betrayal,” will premiere on Sunday, Aug. 25.

In a statement, both the network and series co-creator Courtney Kemp confirmed that the show’s previously announced spinoff(s) would be set in the same world that Ghost, Tommy, Tasha, Angela & Co. inhabit.

“Season 6 brings us to the end of what we know is just the first chapter of the Power story. However, as one chapter comes to an end, another will begin,” said Carmi Zlotnik, Starz president of programming. “Courtney Kemp and 50 Cent have created a world rich with complex and dynamic characters, and there are a number of stories we plan to tell as we continue to explore and expand the Power universe.”

Kemp added that future endeavors will “follow some of your beloved Power characters beyond the scope of the initial series… but we will play with your expectations of which characters, where and the master timeline of it all, creating a Power universe as unpredictable as the original.”

Series co-creator Curtis “50 Cent” Jackson played drug kingpin Kanan, who died in Season 5. Jackson will make his directorial debut with the sixth season’s third episode, an installment which he promised “features one of the wildest scenes ever on the show.” Anthony Hemingway (The People v. OJ Simpson: American Crime Story), who helmed the first two episodes of the series, will return to direct its finale.

After the Season 5 finale, Kemp hinted that the upcoming run of episodes might be the show’s last. “What I can say,” she told TVLine at the time, “is that the story is coming to an end.”

Scroll down to see the Season 6 poster (click on the image to see it larger), then hit the comments: What do you think will happen in Power‘s final episodes? 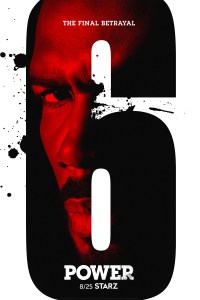