Warning: This post contains major spoilers for the Season 5 finale of Power.

Has AUSA Angela Valdes gone to that great courtroom in the sky?!

Power‘s Season 5 finale certainly wants us to think that’s a possibility, given how Lela Loren’s character was shot squarely in the chest by a vengeful Tommy at the close of Sunday’s season ender. 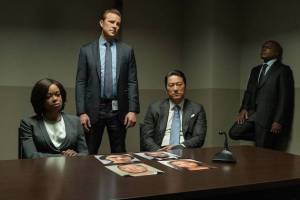 After she was caught by the feds at the end of last week’s hour, this week’s episode chronicled a 24-hour time span in which Angela rallied Ghost, Tasha and Tommy to close any gaps the Assistant U.S. Attorney’s office could use to take them down. Meanwhile, Mak & Co. spent that time trying to get Tasha, Tommy, LaKeisha, Proctor and Angela, among others, to flip on all or some members of Ghost’s organization in order to save themselves.

When it appeared that the case would not move forward, a frustrated Saxe decided to let Tommy in on the knowledge that Ghost had manipulated him into killing Teresi. Then he left Egan a copy of the tape in which Teresi implicated Ghost in Sandoval’s murder but made sure to say Tommy played no part in the crime.

Filled with rage about Ghost’s duplicity, Tommy told Keisha, “I gotta go out.” Then he tracked Ghost and Angela to where they were meeting at their old high school. Angela point-blank asked Ghost if he’d killed Terry Silver, who’d returned to try to flip Tasha but had disappeared during the episode. Ghost swore he hadn’t… as the audience watched a flashback to him choking the life out of the lawyer in a parking garage after watching him and Tasha have sex.

As the pair kissed in a stairwell, Ghost told Angela he loved her. Then Angela looked up to see Tommy pointing a gun at her from above. She pushed Ghost out of the way, taking the full brunt of the hit and falling to the ground. When Ghost looked up to see the assailant, he and a satisfied-looking Tommy locked eyes, and Ghost screamed.

We got series showrunner Courtney Kemp on the phone to break down the uber-important episode, starting with Angela’s prognosis. Make sure you read to the end: Kemp’s comments about whether next season will be the last are quite interesting.

TVLINE | Let’s talk about the big cliffhanger at the end: Are you prepared to say whether or not we’ve seen the last of Angela?
I can say Lela is in Season 6, but I can’t say what she’s doing. 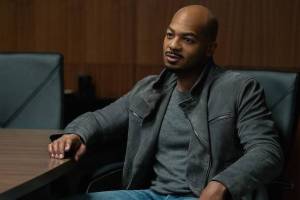 TVLINE | I was struck by that last exchange that she and Ghost had, when she asks him about Terry and he lies to her face. Will that weigh on him, given what happens right after that, as we head into the next season?
Absolutely. Absolutely that’s going to be something that he has to struggle with because he made that decision to lie. The essence of the show has always been the very 12-step idea that you’re powerless, we’re powerless. We don’t have power. So Ghost lies to her in order to keep her. That was the thing. In order to keep the relationship, he lied. And then he’s faced with the situation moments later where he may not have been able to keep her at all, and that the last thing that he says out of his mouth is a lie. If I’m facing that, how much would I want to have those moments back, to tell the truth?

TVLINE | He also has lied to Tommy, and that has some serious repercussions in this episode. Does he feel any culpability, going into Season 6, for what Tommy does at the end of the finale?
He wouldn’t be Ghost if he could take full responsibility for making those choices, now. You’re not trying to get him to change and be a better guy, are you? [Laughs] Ghost would benefit greatly from some self-searching but can I predict that he’s going to take on the responsibility around, ‘I made that choice’? No, not necessarily. I’m sure people will point it out to him.

TVLINE | How would you compare where Tommy is at the end of the finale to where he was after he killed Holly?
The Holly thing was depression, shock and horror. He makes the decision to kill Holly all on his own. The decision to kill Teresi, he was tricked into that. So his reaction is different. After shooting Angela, I don’t know: If you’ve watched the show the whole time, I don’t know how much bad feelings Tommy is going to have about that. It’s very different. There’s shame involved with the Holly kill.

TVLINE | The Tommy-Angela scenes have been some of my favorites this season, but I’m always struck by how quickly I forget that he’s a person who’s capable of doing horrific things.
I find that to be fascinating. I was on the airplane yesterday, and the stewardess came over and she was talking to me about the show, and she was a huge fan. And she was like, “I love Tommy, he’s my favorite character. He’s so emotional.” And I’m like, “Yeah, he’s totally emotional.” And then she says, “Yeah, he’s just so lovable. I just love him so much.” And I was like, “You know he’s a serial killer, right?” She was like, “No, he’s not!” I was like, “Girl.” [Laughs] Are you watching this show? He’s really, intensely messed up… It’s in such contrast to Ghost, who murders with such consideration.

TVLINE | So we have some question marks at the end of Season 5: Bailey Markham’s laptop, Terry Silver’s body, Maria Suarez — am I missing any?
I don’t think so. The biggest one is the one right in front of you, which is: Angela saw Tommy shoot her. So, I don’t know. What happens to you when you shoot somebody in law enforcement, usually? 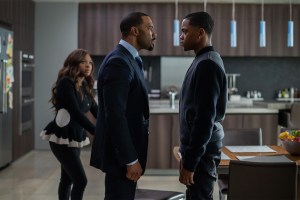 TVLINE | Do you see Tariq being a Dre-level threat or greater in Season 6?
Yup.

TVLINE | I remember how you were saying last season that the young sleep on the old. But I’ve gotta say: This season, it felt like the old slept on the young.
[Laughs] I’ve said this to you before, this is not news: Tariq is half Ghost and half Tasha, biologically. And his official godfather is Tommy, and his de facto godfather is Kanan. What do you think the kid is gonna be? We seeded this in very early, that he was playing first-person shooters very early. When you say the old are sleeping on the young, it might be a little bit about how I view my daughter, which is that she’s not dumb, she’s a kid. So she just doesn’t have access or information about some things, but she’s not dumb. And people substitute inexperience for stupidity, and they’re not the same thing.

TVLINE | You’ve said this is not a 10-season show. Power already has been renewed for next season. What’s the possibility that Season 6 will be the last?
I’m not allowed to answer that, per Starz. But what I can say is that the story is coming to an end.

Now it’s your turn. Grade the finale via the poll below, then hit the comments with your thoughts!