That’s the fate that awaits Tony Teresi at the end of this week’s Power, once Tommy learns exactly what his father has been up to since his release from prison. But it’s also a good cautionary tale for a few other characters, such as Proctor and Angela, who find themselves between the federal government and a hard place — and by “hard place,” we mean “prison for a very long time” — by the end of the hour.

Elsewhere, Tariq thinks he’s the man now… and though it pains me to say it, he kinda is.

Read on for the highlights of “There’s a Snitch Among Us.”

ALL GROWN UP | The morning after Kanan’s shootout with the police, which left four cops dead, Tasha, Ghost and Tommy argue at the penthouse. “Your plan needed Tariq to make it happen. What, one dead kid ain’t enough for you?” Ghost spits at his wife, who answers with a stinging slap to his face. Tariq interrupts to say that he knew exactly how the plan would go down — that Kanan would fight and likely die rather than go back to prison — and adds that he was the only person who cared about the ex-con. “I took a loss so you guys could win,” the teen says, and when Ghost gets in his face about respect and such, Tariq could not care less.

“Teach me the motherf—king game, Ghost,” ‘Riq demands as Ghost takes him to Grand Central to hop a train back to Choate. Ghost says he’d rather see his son dead than a drug dealer, and they part on bad terms. Plus: When Ghost is gone, we see that Tariq doubles back and stays in Manhattan without telling his folks.

A FRESH(ISH) START? | The next stop on Ghost’s Why Is No One Listening To Me Tour 2018 is Angela’s place, where he yells at her for plotting with Tasha to frame Kanan. She points out that his idea to frame Dre wouldn’t have held up to questioning, and how he never seemed bothered by all the times he lied to her when it was convenient for him. But now that they’re in the clear, “This is where we can start over,” she says. He doesn’t look convinced.

Speaking of troubled couples, Tommy lets Keisha know that if they’re going to be together, she may have to lie to the authorities again. She doesn’t like hearing it, but rationalizes that as long as he’s honest with her, it’ll be her choice — unlike when Tasha gave her no choice whatsoever. Plus, “I mean, I know you move weight and all, but you never killed anyone, right?” she asks. He very pointedly doesn’t answer.

But Tommy’s got even bigger problems: After one of the trucks smuggling his drugs into the correctional center gets searched, it makes Sammy very paranoid that there’s a snitch in Teresi’s crew. But Teresi calms his old pal by saying he’s just about ready to tell the Feds that Tommy ordered the hit on Mike Sandoval last season.

When Teresi makes the call, though, he incriminates Ghost but not Tommy — and Sammy overhears the whole thing. He’s irate, and he’s just about to tell Tommy that his dad is dropping a dime on him when Teresi guts his longtime associate with a butcher knife, then tells Tommy that he did so because Sammy was the snitch. 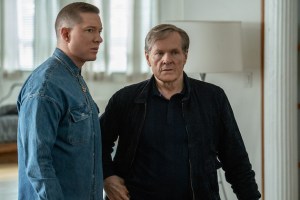 TOODLES, TONY | Elsewhere, after Alicia demotes Dre and promotes Cristobal in his palce, Dre makes sure that Angela knows exactly where and when to find the cartel head… just as she’s about to have sex with Cris at a hotel. The Feds bust in and nab the remaining Jimenez sibling, which is a huge win for Angela. But when she notices Mak and Saxe acting squirrelly while the rest of the department is congratulating her for the arrest, Angela snoops… and finds photos of her co-workers meeting with Teresi.

She snaps cell phone photos of the pictures and runs to Ghost, telling him that Teresi could take down all of them if someone doesn’t stop him. But Ghost knows that Tommy won’t listen to him, so he goes to Vincent and it’s a whole thing but eventually Tommy learns what company his father has been keeping. So while driving Teresi to hospice to see Connie one last time, Tommy confronts Tony about what he’s done. Teresi admits it but makes sure Tommy knows how he kept his name out of anything incriminating, and that he’s really proud of him as a son. It seems for a moment like Tommy is going to let his father live, but then he shoots him multiple times in the chest and leaves him in front of the gravestone he and Connie bought.

Then Tommy drives to his mother’s house, where he finds her doing scratch-off lotto tickets in bed (ha). He climbs in next to her, and she holds him while he cries and tells her he killed Tony. “You did the right thing,” she says.

KIDS THESE DAYS | In case you were wondering what Tariq is up to for most of the episode: He meets with Vincent and sets up a trial situation to help him move drugs, then asks the crime boss for help getting a fake ID. The name on that license? Erick Stark. ‘Riq uses the faux driver’s license to get Kanan’s ashes from the morgue.

TIME’S UP, ANGELA! | Saxe and Mak get Proctor to wear a wire while talking with Ghost, but the newly reinstated lawyer makes them give him a written agreement that he’ll get immunity regardless of whatever is or isn’t said on the tape. And then Proctor does wear the wire, but he immediately alerts Ghost to its presence. Therefore, Ghost says he knows nothing about Sandoval’s murder — and he refuses to say anything that makes it seem like Angela was involved — while the device is recording. After, Ghost nearly chokes the life out of Proctor for putting him in that situation, but Proctor says St. Patrick needs to stop protecting Angie, because the Feds are gunning for her and she’ll flip on everyone like a perfectly done pancake.

Funny he should mention that… because after Teresi turns up dead, Angela is summoned to a late-night meeting. Tameika and the rest of the team are there, as well as Blanca from the NYPD, and they tell Angela that they think she had the old man killed because he was about to let everyone know about her role as Ghost’s consigliere. Wiggle your way outta this one, lady!

Now it’s your turn. What did you think of the episode? Are you ready for next week’s finale? Hit the comments!