Question: Any new info on Lucifer? I need my demon fix. —Anthony
Ausiello: We know who Eve is, and Linda and now Chloe will know who Eve is, but what about the out-of-the-loop humans in Lucifer’s orbit? Aimee Garcia told us that Ella, who is firmly Team Deckerstar, will see Lucifer’s “first girlfriend” as “just some chick who’s a party girl, who ends up breaking Ella down with her hugs. Yeah, Eve’s a hugger and Ella just, like, melts. She’s like, ‘God, she’s pretty cool.'” (No pun intended.)

Question: I’ll take anything about Game of Thrones. —Henry
Ausiello: Euron Greyjoy is so full of… shenanigans that even after his scenes with Cersei in the season premiere, it’s tough to tell how much he’s interested in her vs. how much he’s interested in her share of the Lannister gold. So we asked Pilou Asbæk about the sailor’s true intentions. Spoiler alert: Because this is Thrones, we didn’t get a ton of info — but Asbæk was really charming nonetheless. “When I did those scenes with Lena [Headey], you have to do them as honest as possible,” he explains. “When he says, ‘I always wanted to marry the most incredible woman in the world, so here I am,’ he means it… until the moment he meets Daenerys and he wants to be with her…. He’s got great taste.”

Question: The Younger finale ended on kind of a weird note for Liza and Charles. Can you give me any hope? –Sarah
Ausiello: As we saw in the trailer for Season 6, Liza and Charles are still hot and heavy, even with her child-sized bed standing in their way. As for how they really feel, Sutton Foster says, “Liza’s still trying to fight for her happy ending with Charles. How fun is it going to be without all the secrets? We’ll see.”

Question: Is anything big happening with Max’s storyline in New Amsterdam‘s May 14 finale? —Malasha
Ausiello: “At the end of the season, each character has to or feels compelled to pay Max back for everything that he’s given them,” showrunner David Schulner previews. “That will lead to some pretty extreme decisions.” As for Max’s health, he’s “going to get worse before he gets better, and we don’t see him getting better this season, unfortunately.”

Question: Got any scoop on Chicago Med? —Mags
Ausiello: Will’s got a bad feeling about Natalie’s new guy, who’s “a little bit disturbing.” In the May 8 episode, “Will suspects that a kidney donor is being coerced… and that becomes Will’s story of exploring his suspicion about Phillip,” co-showrunner Andrew Schneider previews.

Question: I know work on Legends of Tomorrow Season 5 is probably in the early stages, but how different does the current roster of Legends look for next season? Are they all going to make it out of Season 4? —Derrick
Ausiello: As a matter of fact, Matt Mitovich asked showrunner Phil Klemmer if the May 20 season ender would hint at any crew changes, as is almost tradition on the ensemble series. “Oh, it will do more than hint,” the EP answered. “It will pretty much announce them.” 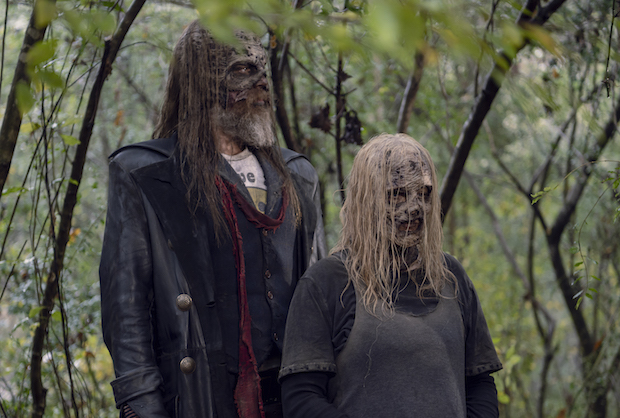 Question: Season 10 of The Walking Dead feels like it’s 100 years away. I need spoilers now. —Loren
Ausiello: As luck would have it, I do already have a bit of Season 10 intel. Since Alpha’s border wall made head cases of so many survivors — and Danai Gurira is said to be hanging up Michonne’s katana — the show is once again repopulating. First up are two new recurring characters, one male, one female, both somewhere in their 30s or 40s. From what I hear, he’s sorta like Shane before Shane turned into a rogue psycho — or Daryl if Daryl spoke in more than grunts — and she’s a particularly devoted acolyte of her group’s leader. Or at least she’s certainly more devoted to the Big Kahuna than her sister, which makes her sound to me like a Whisperer. But either or both newbies could also be part of whatever community reached out over Eugene’s CB radio at the end of Season 9. The Commonwealth wouldn’t be calling already, would it?

Question: Any buzz on Blindspot‘s renewal prospects? —Cait
Ausiello: The buzz is there will be a lot of unsatisfied fans if NBC doesn’t commission a fifth season because, per series creator Martin Gero, the Season 4 closer “would be a very bad series finale.” And despite NBC’s decision to pull the show from the schedule for the remainder of May sweeps, Gero maintains, “We’re very optimistic that we’ll be able to do a fifth season, and [the finale is] setting up the show to do just that… We’re not done yet.”

Question: Why haven’t we seen Jane’s daughter all season long on Blindspot?! — Laura
Ausiello: Gero confirms that Avery’s arc “is a closed book for now,” citing the lack of a compelling storyline as the reason for her absence. “I love Kristina [Reyes], and I would love to find a way to get her back on the show,” he offers, “but it kind of overcomplicates things sometimes to just cram her in a story.” 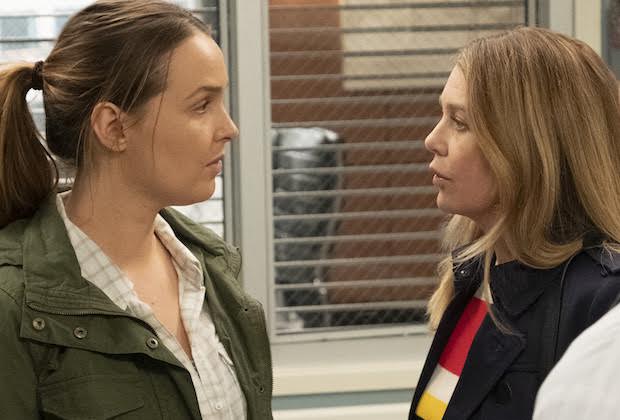 Question: Got anything on Grey’s Anatomy‘s season finale, besides the title? — Laura
Ausiello: As Caterina Scorsone (Amelia) hints in our May Sweeps/Finale Preview spoilerpalooza, May 16’s “Jump Into the Fog” doesn’t just end Season 15, it lays the groundwork for Season 16 — and it sounds like that ground might be kinda shaky. At the read-through, “We were all like, ‘I can’t believe it!'” she says. Fingers crossed that somewhere in there Jo will at last tell Alex why she’s been shutting him out since her fateful trip to Pittsburgh. The signs that she will are certainly good. In May 9’s “Drawn to the Blood,” she confides in Meredith… dare we hope as a precursor to opening up to her husband?

Question: Will we see Amelia’s sisters again this season on Grey’s Anatomy? I feel like there was a lot of unfinished business. — Lizzy
Ausiello: It’s doubtful that business will get finished this season since there are only three episodes left. But down the road? It seems almost inevitable, especially since Amelia reached out to Nancy at the end of “Good Shepherd.” “Maybe since Nancy and Kathleen are both doctors, they could come to Grey Sloan and see how capable and competent their little sister is,” suggests Amelia’s portrayer, Caterina Scorsone, adding that there’s likely method to the Shepherds’ meanness. After all, in addition to losing their father, “Nancy and Kathleen were also probably traumatized by seeing their sister in the grip of addiction. So I imagine it’s really hard for them to put down that narrative.” If they did, they might be forced to scrutinize their own failings more intensely. “On some level of their psyches, it’s probably a relief for them to have Amelia around because it alleviates their own self-doubt,” Scorsone theorizes. She’s become “an externalization of all of the parts of them that they don’t wanna look at, all their shadow parts.”

Question: Will Stella and Kelly sort their relationship out on Chicago Fire? —Laurel
Ausiello: “There’s definitely going to be a real storm of emotions going on between the two of them as we head toward the finale,” showrunner Derek Haas says. “There’ll be some answers, I’ll say that, as to where this relationship is going.” 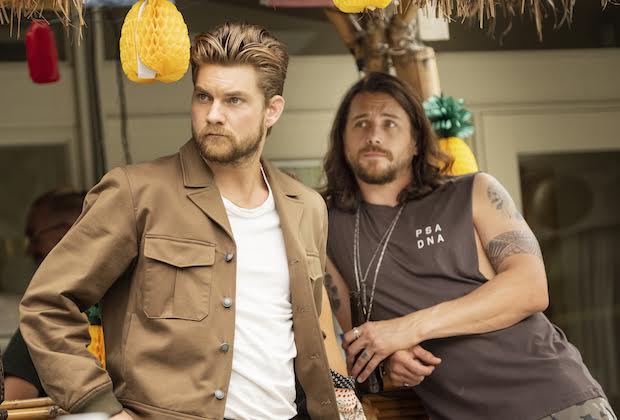 Question: Can’t wait for Animal Kingdom to be back! Anything you can give me to hold me over? — Joe
Ausiello: When Season 4 of the criminally-addictive TNT drama kicks off with “Janine” on Tuesday, May 28, we’ll not only find out just how much hot water Adrian landed in after he got caught smuggling a surfboard full of coke through customs in the Season 3 finale, we’ll learn how big an impact that bust is having on his romance with Deran. Spoiler alert: It’s not good (and can only get worse with Craig acting as self-appointed relationship counselor!)..

This AAnd That…
♦ Brooklyn Nine-Nine: The annual Halloween Heist is getting an extreme May-keover! Per the logline for the May 9 episode, “In order to distract Terry from the stress of his upcoming lieutenant’s exam, Jake, Holt and the squad decide to hold the annual Halloween Heist on a new date, Cinco de Mayo.”
♦ Arrow: Per multiple sources, we will catch an actual glimpse of grown-up John Jr…. but not until next season, when Diggle and Lyla’s son circa 2040 becomes a major recurring character on the show. 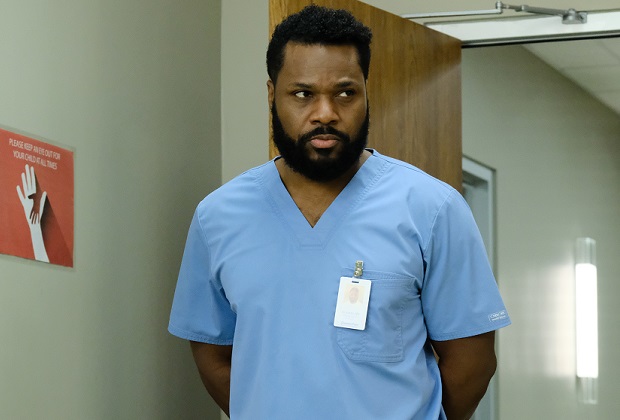 ♦ The Resident: This season’s final two episodes will offer up an origin story of sorts for Malcolm-Jamal Warner’s Dr. Austin aka The Raptor. Per EP Todd Harthan, the show will explore “whether or not he’s going to track down his birth parents, and what that means for him. Who are they? Why did they give him up? Where do they live?” And The Raptor’s backstory won’t only be confined to Season 2. According to Harthan, “We’re going to tease the audience with who he is, where he came from and the promise, in Season 3, of the things we may discover about him.”
♦ Law & Order: SVU: There’s increasing buzz that next season will be the record-breaking series’ last. An NBC insider, however, maintains that no decision has been made.
♦ The Magicians: The overabundance of magic that viewers witnessed at the end of the Season 4 finale is most definitely not a good thing. “We [will] explore what that means — we’ll start on Earth and Fillory and go from there,” co-showrunner Sera Gamble previews. “Every season magic is sort of reset in some way that is really s–tty for our characters. Either they don’t have enough, or maybe sometimes in Season 5 they’ll have a little too much, and discover that that, too, is very challenging.”