Animal Kingdom’s Shawn Hatosy wasn’t exaggerating when he warned TVLine a couple of weeks ago that being under Smurf’s roof again would have a “scary effect” on Pope. And in Tuesday’s Season 3 finale — how can the season be over already?!? — we found out just how scary. Plus, we got the (possibly very brief) return of a character I loved, the arrival of a character Mia’s long feared, and a second resolution to the Smurf/Lucy conflict that was even bloodier than the first. Who didn’t make it to Season 4? Read on… 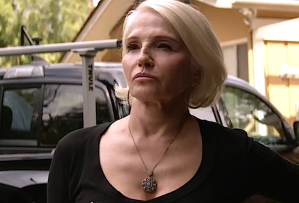 ‘MAYBE I COULD WAX YOUR BOARD AND S—‘ | As “The Hyenas” began, we saw how all of the Codys were beginning their day: Despite using a condom, J was getting fussed at by Mia for, you know, finishing during their round of intense morning sex; Smurf was playing Betty Draper in the kitchen and fretting over the fact that Pope was already back to not sleeping (as if she hadn’t expected as much when she forced him to move home); Craig was hiding in his bedroom with Frankie rather than face his mother and brother; and Deran was suggesting to Adrian that maybe he could tag along to South Africa. Once the episode really got underway, Smurf recruited Pope to chauffeur her all over town as she investigated Morgan’s disappearance and the theft of her properties. (She wouldn’t find out until later that what was left of her lawyer’s bloated corpse had washed ashore a la Chrissie’s body in Jaws.) Soon, she discovered that all of the holding companies that Morgan had set up had names that included her sons’ initials. (Clever, J, trying to incriminate your uncles!) She also learned that the notary who’d signed all the paperwork… was an old guy with dementia living at a rest home two blocks from where J and Julia had once resided. Coincidence? Smurf thought not. 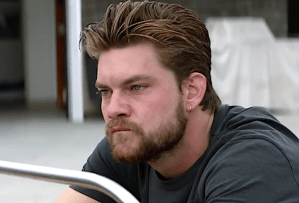 ‘HELLO, MOM, HOW ARE YOU?’ | While all of that was going on, J reassured the manager of the bowling alley he’d just purchased that he had no intention of shutting it down to build condos; he would, however, be taking over the daily deposits. Meanwhile, Craig and Frankie rolled up to Colin’s with a moving van. “So what are we gonna steal?” Craig asked. “Everything, baby,” she replied. “Absolutely everything.” And if you didn’t already think she was the perfect bad girl for him, you had to have when she invited him to join in her favorite post-heist reward: a little freebasing and ice cream. Back in Oceanside, Deran made an offer on a place by the beach for himself and Adrian. Smurf even agreed to give her son the rest of his Lucy cut so that he could pay for it. But when things seem like they’re going too well for someone on this show, they always are. Only a day later, Deran learned from a Dept. of Corrections officer that Ox had broken parole. He then found out from Colby that Ox had croaked in Mexico… slowly, too. When that grim news appeared to choke up Deran, Colby told him not to bother putting on a show of caring — Ox’s death was on him as much as anyone. Since Ox’s mother only thought that he was missing, Deran felt that the right thing to do would be to tell her the truth. Only, upon discovering that she’d just recently sobered up, he elected to keep her in the dark. 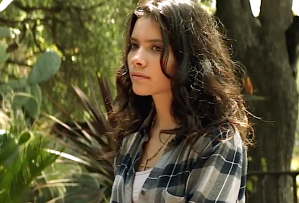 ‘THIS AIN’T NO ROMEO-AND-JULIET S—‘ | After getting a call informing her that Morgan was fish food — well, at least parts of her were — Smurf delivered an envelope to Pete. And as we well know, Pete getting an envelope is always bad news for somebody. At first, it appeared that that somebody would be Mia. He ordered her into a car for a drive with Tina, along the way to their destination unknown chastising her for her continued involvement with J. She wasn’t in some grand romance, he spat. And even if she was, “you ain’t no Juliet, puta.” That evening, when J returned home, Smurf “filled him in” on Morgan’s “boating accident” and detailed how the attorney had pulled off the property sales. Smurf wasn’t entirely surprised, of course — Morgan had always been smart. “You’re smart, J,” she added as if she was just realizing it. “Are you that smart?” After Smurf ended the conversation with a warning about not getting Mia pregnant that wasn’t really at all a warning about not getting Mia pregnant, J tried desperately to no avail to reach his sometime hookup. But she was busy in Mexico: While Tina murdered Lucy’s henchman, Mia murdered Lucy! Her young son Carlos saw both killers, yet Tina left him unharmed. (Somehow, I doubt that was part of Pete’s plan or Smurf’s orders.)

‘TAKE OFF YOUR CLOTHES, LEAVE THE HEELS ON’ | When Craig woke up at Colin’s the morning after his “celebration” with Frankie, all that was left of her was her robbery glove and a note scrawled across her lover’s chest telling him where to find his car keys and promising she wouldn’t rip him off. Back at Cody HQ, Pope’s afternoon of watching nature TV — hyenas in particular — was interrupted by the arrival of the hooker his mom had ordered to help him “relax.” To say that their interlude didn’t go well would be an understatement. Pope cried as he had his way with the call girl, then went driving off on a shirtless rampage that culminated in him accidentally ramming some woman’s car and taking a tire iron to it when she threatened to photograph his license plate. Desperate, he then made his way on foot — barefoot, I might add — to the home of the one person who might offer him comfort: Amy! Though she told him immediately, “You can’t be here, Andrew,” it was only a moment before she was letting him cry in her arms about how he’d lost Lena. (Please make Jennifer Landon a Season 4 regular; Pope and the anti-Smurf are an amazing, heartbreaking couple!) 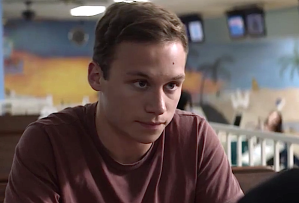 ‘MISS ME?’ | When Mia returned to J’s crash pad following her latest execution, she found the door open… and behind it, her worst nightmare: Tupi, the boyfriend that we didn’t realize was her boyfriend back in Episode 4 when she instructed an old lady to tell him if he called that she was dead. Funny, he said. “You don’t look dead.” Soon, Mia was reluctantly having sex with him — and unnerved that he hadn’t used a condom since she’d “look good with a baby.” To hustle him out before J arrived, she told him that she was working a sting, and yes, of course, she’d cut him in like always. As the hour drew to a close, Smurf surprised Craig, Deran and J by announcing that “I’ve held on for too long” and giving them the titles to all of her properties. Now, Deran could afford his house. And Craig could do whatever he wanted with Baz’s place — sell it or move in. Just then, Pope arrived, still shirtless and bloody. “Did you forget your shoes, baby?” asked Smurf. Well, not to worry — she’d always be there for him, she promised in that way that sounds more like a threat than anything good.

‘I’M GONNA TAKE IT ALL, SMURF’ | In the final moments of the season, Adrian was busted for smuggling coke through customs in a surfboard, and after seeing the inscription in the watch Smurf had intended to give to Baz before presenting it to his son instead — “For My Very Smart Boy” — J stole into his grandmother’s room and whispered in her ear that he was going to take everything she had and everyone she cared about. Which seemed, frankly, unwise, seeing as she’s so the kind of person to sleep with one ear open as well as one eye. Anyway, when he left her bedroom, we got a momentary stare-down between him and Pope, one that hinted at Season 4’s major conflict… or perhaps its major alliance? Anyway, what did you think of “The Hyenas”? I can’t be alone in hoping Jennifer Landon returns next season, right? Grade the finale in the poll below, then hit the comments with your Season 4 wish list.