There’s a good reason Grey Worm kissed Missandei with such abandon in Sunday’s Game of Thrones: For perhaps the first time, says portrayer Jacob Anderson, he’s quite worried that he might never see her again.

“For Grey Worm and Missandei at this point, and I guess for the Unsullied and for the Dothraki as well, there’s a sense they’re going into completely unheard-of territory for them. This is a completely new world,” the actor tells TVLine. (For a full recap of the episode, go here.)

Anderson’s co-star, Joe Dempsie, elaborates. “I don’t imagine the Unsullied and the Dothraki have gone into many battles that they weren’t more or less 100 percent certain they could win,” he says. “That’s what’s different about this one, totally: There’s a lot of people for whom the odds really don’t seem good.”

He’s referring to the heralded Battle of Winterfell, a skirmish between the Night King’s undead army and Daenerys’ assembled forces that will truly get underway in the season’s upcoming third episode. The sequence reportedly required weeks of outdoor night shoots, assembled the most Thrones characters in one place since the series’ 2011 premiere and involved conditions so rough that cast member Iain Glen called filming the installment “the most unpleasant experience I’ve had on Thrones.”

From Episode 3’s preview, it looks like the actors’ fictional alter egos aren’t having a much better time — not that that will dissuade Gendry from jumping into the fight, Dempsie says. Despite the young blacksmith’s lack of war experience and his eve-of-battle romantic interlude with Arya, “He can’t wait. He’s so naive!” he says, laughing. 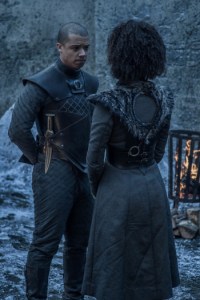 He adds that Gendry’s trip beyond The Wall near the end of Season 7 made him think he knew the enemy they’re facing, but “I don’t think he quite knows the scale of the army that’s heading south. There is that conflict in Gendry where he knows he wants to be part of something bigger. He knows he wants to be involved int his fight to save humanity.” He chuckles. “Doesn’t mean that he’s not terrified.”

Grey Worm’s greatest fear, Anderson reflects, first surfaced in the Season 7 scene where the soldier and Missandei made love: “He’s scared to die now,” he says. “Attachment can make you super vulnerable… Part of why Grey Worm has always been such an effective fighter is that he is not scared of anything. He’s never been scared of anything.”

And now? “He’s got somebody to fight for,” Anderson says.