It all makes sense now. Of course This Is Us was happy to let us know early on that the mysterious “her” in the flash-forward sequence was Rebecca… because, as Tuesday’s season finale reveals, the bigger question has to do with the man sitting next to her.

The season-ender takes us once more into the future as Randall, Toby and various other members of the Pearson family visit a very elderly Rebecca. But when Randall enters her room, Nicky — aka Jack’s estranged brother — is by her side.

That’s right, Nicky. And not, as we might expect, Miguel. To quote a great philosopher: Baby say whaaaaat?!?

But first we have to get through the present, including a breakup and a reconciliation, as well as the throwback storyline that lands Rebecca in the hospital when The Big 3 are preteens. Read on for the highlights of “Her.” And then make sure to see what the show’s Powers That Be had to say about the episode’s revelations and new mysteries.

MISSING A PIECE | In the past, Rebecca drives in a distracted fashion, and when she leans down to pick up some peaches that have fallen from the passenger seat, she runs her car right into another. The accident breaks her arm in two places and bruises her face pretty badly, and the kids are freaked by her appearance when they show up at the hospital. Though both Jack and a slightly drugged Rebecca assure Randall, Kate and Kevin that Mom is fine, Rebecca urges Jack to take the trio home so they won’t worry so much.

That plan doesn’t go so well, though. After a failed dinner of corn sandwiches (a Jack specialty, apparently) and ice cream, Kate, Kevin and Randall wind up in Dad’s bedroom, unable to sleep because they’re so worried about Rebecca. So Jack makes the executive decision to bring them back to the hospital, where he gives a bleary-eyed nurse a long-winded speech about how their family doesn’t work without Rebecca. She’s not moved, but she’s so tired that she easily caves on letting them in to see Rebecca before visitors’ hours officially start at 6 a.m. (Side note: Jack’s reaction to Kevin’s flirting in this scene is aces.) 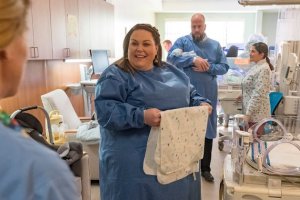 DEEP BREATHS | In the present, Baby Jack is two weeks old and able to breathe on his own without the help of a ventilator. The doctor warns Kate, Toby and Rebecca, who’s become a presence in the Neonatal Intensive Care Unit, that the baby may stop breathing from time to time. Although it seems alarming, it’s normal, and a little tap on his teeny foot will jolt him back into sucking in that sweet, sweet oxygen. Rebecca annoys Kate by asking a whole bunch of questions, then annoys her more by remembering exactly what to do when Jack actually does need a little jostle to regulate his breathing. A scared Kate then basically blames Rebecca for the entire no-breathing episode in the first place, and Rebecca scurries out of the NICU.

At Kate and Toby’s place later, Kate confesses to Rebecca that she feels like she’s never going to be as good a mom as her own was, then maybe shows a little growth by owning up to the fact that she was a jerk. But then she says that she’s happy Rebecca and Miguel are going to live nearby, because Rebecca is “magical” and Jack should have that in his life. Then they cry and hug, which is basically the end to every Rebecca-Kate vignette, right? At the end of the hour, little Toby is released from the hospital and comes home. 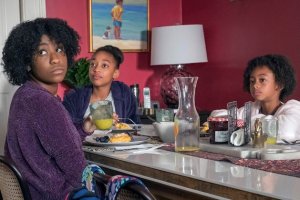 WELL PLAYED, DEJA | Randall returns home to drive Deja to a debate-club event in Newark; he and Beth are oddly polite with and distant to each other while he’s in the house. After some apologies on both sides for the meaner things that were said during their big fight, he asks if they can talk when he returns. But Beth isn’t sure that they’ll be able to find a way out of their current emotional wasteland, and the fact that she says as much lands on Randall like a physical blow.

In the car, Deja lets him know that both she and Tessa are aware that something is going on between him and Beth. But she’s not done dropping truthbombs. When they arrive at an address in Newark that is decidedly not a debate meet, she reveals that “You’re not the only one in the world who can drag somebody on a long car ride just to give them a big speech at a meaningful location.” The house they’re parked in front of is the foster house where she and her foster brothers and sisters were starved by the money-grubbing man and woman who took them in. She remembers how the man would buy scratch-off tickets with the money he didn’t spend on the kids’ meals, and that she and the other foster kids stole a ticket one night and dreamed of the burgers they’d buy if it was a winner. (It wasn’t.)

The point of her story? “Most people don’t win, Randall, but you did,” she says, adding that it happened twice: “Once when you got adopted, and again when you met Beth.” Then she tells him to get it together. Randall? You just got Randall’d. 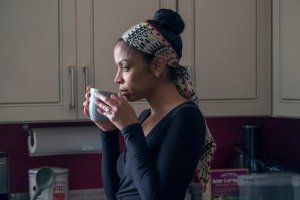 BETH COMES THROUGH | So Randall calls Jae-won and gives him a heart attack by asking what would happen if he resigned before he even was sworn in. “It would basically confirm the worst fears of everyone who put their faith in an outsider with zero experience in government or politics,” the exasperated campaign manager says. Regardless, when Beth returns home late, Randall announces that he’s going to give up his city council seat because “It’s just a job.” But she says that’s not going to happen. Instead, “We’re moving to Philadelphia.”

Beth was late coming home because she was meeting with a Philly realtor who showed her potential locations where she could open her own dance studio. When Randall wonders how they’ll pay for everything, she says they can sell their house. He’s taken aback, but this looks like the solution that can solve all of their problems. “We don’t work when we’re apart,” she reminds him, just before they kiss. “But together, baby, together we set the world on fire.” Later, we see the family packing up their place in preparation for a move.

I’m glad they worked it out, because I love this couple. But how did it take them THIS long to come to relocation as a possible problem-solver? We’ve been yelling about it for weeks! 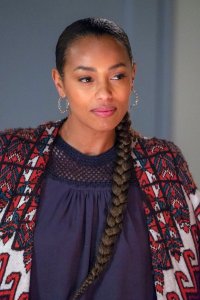 ZOE GO-ES | Remember how Kevin said he was TOTALLY COOL with Zoe’s desire never to have kids? He’s not. And after he gives Tess a pep talk and watches Zoe hang out with Annie while they’re babysitting the nieces, he’s feeling his biological clock go tick tick tick. So he ever-so-casually brings up the point that Rebecca initially didn’t want kids, and see how well all of that worked out?

When they get home, Zoe knows it’s time to pull the trigger: She gently breaks up with him, crying as she says that she definitely thinks he should be a dad, “But I don’t want that.” And when he reminds her that he made his choice to be with her, sans kids, she responds: “I think you made the wrong choice.”

Then all that’s left is for her to pack her things and move out. Not long after, Kevin flies out to California to see little Jack and announces that he’ll be there “indefinitely.”

‘HEY NICKY’ | OK, now for the flash-forward. Tess and Randall walk into a home, where Beth is waiting for them. Randall and Beth are very much together: They kiss hello, and she’s wearing her wedding rings. Then Toby shows up, remarking, “Man, Kevin’s house is huge.” Two puzzling things: 1) He brings sidewalk chalk with him, just like Beth brought the Pin the Tail on the Donkey game, and 2) He says that he talked with Jack, and “They’re on their way.”

A boy walks by and calls Randall “Uncle Randall” — it’s Kevin’s son, who is probably about 9 or 10? (I’m terrible at guessing kids’ ages. Last week, I would’ve told you Deja was 15.) Kevin’s out getting food, so Randall says he’s going to go “say hi.”

Then he walks down the hall and opens a door into a room where a very elderly Rebecca is in a hospital bed, her long white hair fanned out around her. She seems a little out of it, but it’s hard to tell exactly what’s going on. “It’s Randall. Your son, Randall,” Randall says. And then he nods to the man sitting by Rebecca’s bedside, “Hey, Nicky.”

The camera then gives us a clear shot of an older Nicky, and that’s all we get until next season!

Now it’s your turn. What did you think of the finale? Do you already have theories on what brings Nicky back into the Pearson family’s fold? Grade the premiere via the poll below, then hit the comments with your thoughts!