Ever since the Arrowverse’s most recent crossover, fans have speculated that Oliver Queen/Green Arrow will perish in Fall 2019’s “Crisis on Infinite Earths” team-up event. Now, with Arrow‘s recent cancellation, there is more fuel to add to the fire.

Series lead Stephen Amell announced on March 6 that, after eight seasons, he will be retiring his bow and arrow as the flagship Arrowverse series wraps its run with a 10-episode Season 8. Looking at the history of final seasons, there is plenty of precedent for shows killing off lead characters in their closing episodes. Breaking Bad, Lost and Person of Interest are just some examples of series that said goodbye to leads towards the end of their run. There is no reason to assume that Arrow won’t do the same.

Going beyond general TV trends, though, the death of Oliver Queen seems apparent for other reasons. Towards the end of “Elseworlds,” Superman discovered that Flash and Supergirl were fated to one day sacrifice themselves in order to save the planet. Unwilling to let his good, inspiring friends die, Oliver met with the Monitor face to face and made a secret deal with him to save his fellow heroes.

“The universe is a complex piece of machinery, and balance must be maintained. One change requires another,” said the god-like Monitor. “How would you propose I keep the balance?”

While we don’t know what the details of their deal entailed, the Monitor clearly wanted something from Oliver, and it’s a safe bet to assume that it involved trading a life for a life. In this case, Oliver’s in exchange for Barry and Kara’s. However, Oliver is still alive and well, so when will he die?

Enter “Crisis on Infinite Earths,” the Fall 2019 Arrowverse crossover. In one of his many monologues, the Monitor revealed that he unleashed the events of “Elseworlds” in order to prepare Earth for a coming “crisis” — most likely “Crisis on Infinite Earths,” a major DC Comics storyline in which the Anti-Monitor is unleashed on the multiverse and begins to destroy the various Earths. 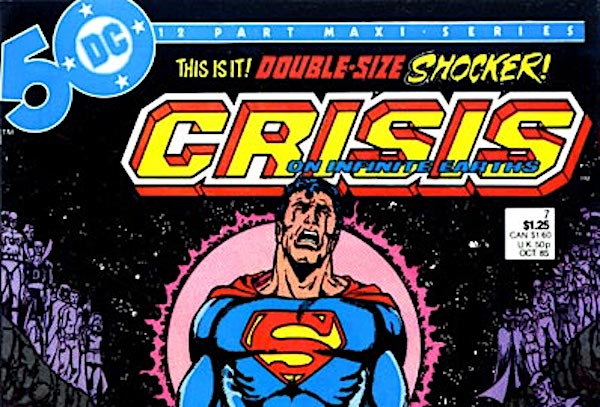 In the comics, Supergirl and Barry Allen die towards the end of this event, but given the TV characters’ most recent dances with death and their series’ renewals, it is unlikely that either of them will perish any time soon on the small screen. What is possible, however, is for Oliver to take their place in the storyline, holding up his deal with the Monitor and sacrificing himself to save the multiverse.

This theory makes sense with the 10-episode order of Arrow‘s final season, as The CW usually airs the crossover in the late fall, just prior to the 10-episode mark of their Arrowverse shows. Furthermore, it would explain Oliver’s absence in the current season’s flash-forwards and Mia’s comments about barely knowing her father.

That is not to say that this is an airtight theory. In a Facebook Live, Amell hinted to a possible return of his character, stating that “Something tells me even when I’m done, I won’t be gone. If you watch the Arrowverse, you should understand that.” But given the Arrowverse’s familiarity with time travel and alternate Earths, Oliver could return in a different capacity even after his death.

CW president Mark Pedowitz has said that “Crisis on Infinite Earths” will take some “big swings.” What bigger swing could the Arrowverse take than killing its titular hero, bringing an end to his crusade as he saves not just his city, but an entire multiverse that he himself helped create?

Do you buy this theory? If not, what was Oliver’s deal with the Monitor, and what “big swing” could Arrow take to give it a proper sendoff?