There’s plenty of celebration — a wedding! a romantic reunion! a patched-up friendship! — in Lethal Weapon‘s Season 3 finale. But there’s also an undercurrent of worry: Does the season-ender also mark star Damon Wayans’ exit from the Fox dramedy?

After all, in October 2018, Wayans surprised fans (and some behind-the-scenes folks) by announcing he would leave the series that December, citing age and his diabetes as reasons. Weeks later, Lethal got an order for an additional two episodes, and production made accommodations (including special diabetic meals) for Wayans to ensure he would finish out the season. Most recently, series creator Matt Miller said that he was “very hopeful” that Wayans would return to the show.

Tuesday’s episode certainly plays on the possibility that Wayans’ Roger Murtaugh won’t make it to a potential Season 4, giving the character a gunshot wound through the ribs. But is it akin to the Season 2 finale attack that paved the way for Clayne Crawford’s controversial departure from the show? Read on to find out what happens in “The Spy Who Loved Me.” 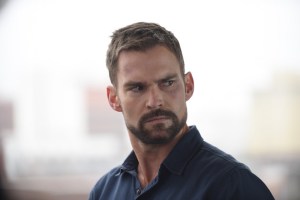 WEDDING PREP | The hour opens with an anxious Andrew awaiting Natalie’s arrival at the church for their wedding. The church is packed with guests, but she’s MIA. Cut to a high-rise building, where EMTs are wheeling out Roger on a stretcher, and Natalie — dressed in her white gown — is strapped to a bomb on a high floor. Cole is up there with her, and when they realize that they’ve got mere seconds before detonation, he shoots out a window, they clasp hands and jump.

To safety? Their deaths? We’ll have to wait to find out, as the action rewinds to two days earlier. Natalie arrives at Cole’s to pick up Maya and deliver some bad news: She, Andrew and the kid are going on a one-year Doctors Without Borders assignment somewhere far, far away. Cole is devastated, but he acts like he’s OK with it. Not long after, Cole meets up with his old CIA colleague Barnes and says that he wants back in on the borderline shady work they used to do.

Meanwhile, at the Murtaugh household, the FBI arrives with an ultimatum for Roger: Wear a wire and get Cole to admit he’s still working for Barnes, who’s shaping up to be even less on the up-and-up than we believed, or face treason charges. 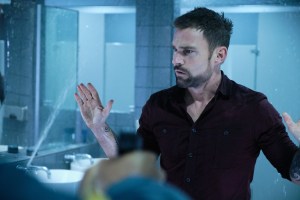 BOYS’ NIGHT OUT | After a Barnes-ordered mission — taking out an assassin who was trying to take out Andrew, of all people — Cole starts to think that Natalie’s fiancé might not be the good guy he appears to be. So he invites himself along on the groom’s bachelor party, where a soused Andrew admits that he’s been working with the CIA, which has been channeling shipments through his Doctors Without Borders camp. Cole quickly realizes that something is very wrong with this scenario, and when Andrew runs into the men’s room at a club to puke, Cole follows him in. That’s where he runs into Murtaugh, who tailed him there and is, indeed, wearing the hidden microphone the FBI asked him to. A fight breaks out (and poor Andrew loses a tooth while face-planting against a toilet), but when it’s done, the FBI takes Cole into custody… but not before Cole realizes his partner was willing to snitch on him.

The FBI informs Cole that Barnes was fired from the CIA six months before, and now he’s running guns for drugs through medical camps, making unsuspecting doctors like Andrew work for him. The Feds want Cole to wear a wire to take down Barnes, but during that meeting, Barnes figures everything out and silences the audio before demanding $10 million for an easy getaway. And if he doesn’t get it? Natalie goes boom. 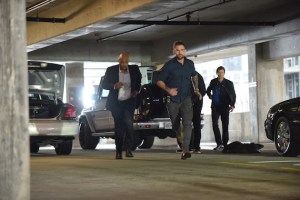 YOU’VE GOT A FRIEND IN ME | So Cole goes rogue, hightailing it to Roger’s house. (In case you were worried: The two make up and apologize, Cole for keeping Roger out of the loop and Roger for wearing a wire to incriminate his partner.) Murtaugh turns the FBI away when they come looking for Cole, and then with an assist from everyone at the precinct, they take $10 million from the evidence locker (acquired from the dead assassin who targeted Andrew) and deliver it to Barnes. But once the deal is made and the two cops are on their way upstairs to save Natalie, Barnes shoots Roger in the back. IS THIS THE END FOR MURTAUGH? Turns out, nope.

Cole brings his partner up to see Natalie, who cauterizes his wound using some gunpowder from a bullet and the sparks from some crossed wires. Ouch. The bleeding stopped, Cole sends Roger downstairs in an elevator to meet the arriving EMTs. And then we’re back at the scene from the start of the hour. After Cole and Natalie jump, the bomb explodes, and the blast throws them directly onto the hanging part of a nearby construction crane. They are — as is often the case with this show — miraculously saved. “Don’t let go,” Natalie begs as they swing in the wind, many stories above the ground. “Ever again,” Cole replies. 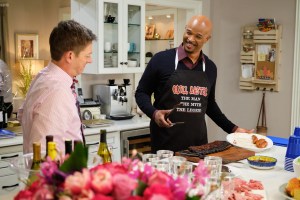 CHANGE OF PLANS | Wesley brings his ex to the church to go through with her nuptials, but her heart just isn’t in it. She goes inside to retrieve Maya and apologize to Andrew, then the mother and daughter run out to join Cole in his car. Natalie kisses him. Meanwhile, at the hospital, Trish watches Roger get rolled into surgery. But before that happens, he hands her the wire he was wearing in his pants, telling her that the recording of their meet-up with Barnes should exonerate everyone whose morals/ethics/professionalism have been called into question.

And then it’s two weeks later! Roger, very much alive and healed, is holding a barbecue at his house. Cole approaches his partner at the grill to say that Barnes has been spotted in Ecuador, but they both agree that they’re too settled now to run off and chase him. But then later, as Roger and Trish board a plane for a spontaneous Ecuadorean getaway, they realize that Natalie and Wesley are on the same flight: The guys are going after their bad guy, after all.

Now it’s your turn. What did you think of the episode? Grade the finale via the poll below, then hit the comments to elaborate on your thoughts!