Time flew when Meredith was having fun in Thursday’s Grey’s Anatomy. In fact, it flew so quickly that the show blew through three major holidays in under an hour. Which leads us straight to one of our two $64,000 questions: When the ABC drama was finished with its mini time jumps, which of Grey’s suitors had gotten Mer’s Valentine’s Day kiss — DeLuca or Link? And No. 2, was it officially splitsville for Bailey and Ben? Read on, and we’ll answer those questions and one we had no idea we should have been asking for ages: What’s Betty’s real name? 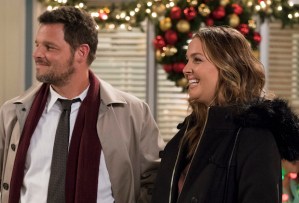 ‘I DON’T THINK WE’VE EVER HAD A CHIEF GIVE US CURED MEAT BEFORE’ | As “Girlfriend in a Coma” began, Garrett was sitting (and standing and pacing) vigil by fiancée Natasha’s bedside as we flashed all the way forward to Christmas. Meredith invited Amelia and Owen over to open presents on the 25th, but they were looking to create their own traditions with Leo, especially with Betty in rehab. Teddy and Koracick were still circling one another, but it was Owen who took his babymama outside to show her that it was snowing. Amelia wanted him to invite Teddy to Christmas dinner, but she was covering for Hunt in the pit. Duh! Jo and Alex informed Mer that they were throwing a New Year’s Eve party — and the former encouraged Grey to ask Link as her date. Instead, she suggested to DeLuca that he come. “You are in a love triangle,” Jo delighted in telling Mer after they ran into a Santa-suited Link. Ben stopped by his former home to drop off presents for Tuck, leading to Bailey admitting that she’d signed both of their names to their son’s gifts as if they weren’t on a time-out. #awkward At Richard and Catherine’s, the cancer patient, exhausted, cut out of dinner with Jackson and Maggie early. Back at the hospital, Nico admitted that he wished Levi was going to be with him and his family the following day. (Obviously, they’d gone from being seriously cute to kinda serious.) Just then, Garrett called for help — Natasha had come out of her coma!

Shortly, we learned that Natasha just had to get stronger, and then she’d likely regain the ability to speak. After spotting Grey in a playful moment with Link, DeLuca asked, “When are you gonna stop stringing him along” and giving him false hope? “Who says it’s false?” she replied playfully. Oh, it was false, alright, the newly-emboldened DeLuca said before dropping some sexy Italian into the conversation and asking whether New Year’s Eve was an actual date or just an occasion where “we’ll make eyes at each other over the punch,” because Mer wasn’t brave enough to just be with him in public. Gauntlet thrown, Grey accepted the challenge — NYE was, in fact, a date! (And I’m not sure who was happier about that — DeLuca or me.) At rehab on December 31, Betty admitted to Amelia that she missed Leo — though not as much as she missed drugs. They’d made her feel better than being a mom. “I should just give you guys Leo and pretend none of this ever happened,” the teen said, pulling away from Amelia. That night, DeLuca was chagrined to learn from Levi that Mer wasn’t coming to the Karevs’ swanky party — she wanted to be there when Natasha used the speaking valve for the first time. As the gang counted down till midnight — yay! — Teddy and Koracick shared a sweet first (as far as we know) kiss. (Should they be Teracick? KoraTed?) 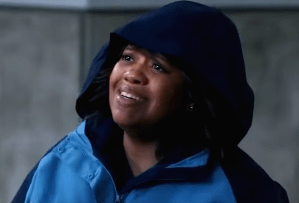 ‘WE’RE HAVING A BABY GIRL’ | At Grey Sloan, Natasha asked Mer whether she shouldn’t be kissing one of the doctors who liked her — or Abercrombie and Stitch, as Garrett called them. “Kiss the one who turns back time for you,” the patient suggested. At Alex and Jo’s, DeLuca and Link copped to the fact that Mer had stood them both up. Mind you, the way she’d torn out of Natasha’s hospital room, it didn’t seem to me that they’d have been stood up for long. Or at least one of them wouldn’t have been. Alas, she never did show up at the party. DeLuca, when he next crossed her path at work, told her that he wasn’t her doormat and what she’d done had just been rude. At Richard and Catherine’s, the patient loathed her rehab exercises, was pissed that her therapist wasn’t helping her get back to her sensual self and refused to let her husband help her do anything. Back at Grey Sloan, Owen and Teddy learned that they were expecting a daughter. When Ben came by on duty, Bailey asked him to come home. But he wasn’t having it. “You broke my heart,” he reminded his estranged wife. “I’m not coming home just because you’re lonely and the fence needs patching.” She pleaded that her meds were to blame. Her pushing him away hadn’t been his fault. “But I’m better now,” she insisted. Called back into action, he told her they could talk about it later. (Though he seemed awfully relieved to have been given a way out from that conversation… ) 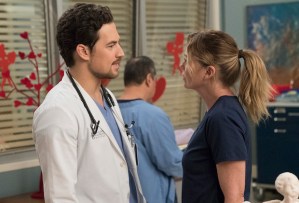 ‘YOU CAN’T LEAVE ME LIKE THAT AGAIN — EVER’ | Flashing forward a bit again, Garrett was upset to learn that Natasha would have to go under the knife once more to drain fluid from her lungs; her recovery had hit a big hitch. Koracick delighted Teddy by recommending to her and her sore feet that they get a mani/pedi sometime — he knew just the place. In the O.R., Mer and Jo marveled at the change in Levi — he was so much more confident than he used to be. In response, he adorably came out to all of them. DeLuca was especially happy for the intern formerly known as Glasses. “If you meet somebody who lights you up,” he said — pointedly to Mer — “you should fight for them.” At rehab, Betty admitted to Owen and Amelia that she’d been lying to them since she met them. Betty wasn’t even her real name; it was Brittany. And they hadn’t been calling her parents all this time, they’d been calling her friend, Jerry. She’d run away when she got pregnant and feared that, if her folks knew about Leo, they’d try to take him. (Yikes — and given her parents’ imminent arrival… ) At Grey Sloan, the dead bowel that Mer had discovered while operating on Natasha suddenly seemed like it might render more than just the patient’s bowel dead. After that crisis, we flashed forward 11 days — Natasha had had a pulmonary embolism. “Why is this happening to us?” Garrett cried. “She was getting better.” He became so overwrought that he almost collapsed and announced that if his fiancée died, he would, too. Mer tough-loved him back onto his feet, though. His job, she said, was to go home, take a shower and fight for Natasha.

At Richard and Catherine’s, she fell off her treadmill while doing her therapy — a crushing sight if ever there was one. “I can’t do this,” she wept. At Owen and Amelia’s, he was anxious to contact Brittany’s parents or at least tell the social worker the truth. In no time, the two of them were in a fight over his remark that addiction was just an excuse for “Betty’s” piss-poor decisions. But really, he was just scared s—less. If Brittany’s parents were gonna take Leo — his son — he wanted to know sooner than later. On Valentine’s Day, Maggie tried to perk up Jackson by suggesting a date. But he was pretty bummed about his mom’s progress and spirits. Maggie admitted to him that during the worst of her mom’s illness, she’d actually wanted out for a moment — out of this life. Back at the hospital, DeLuca asked Mer how she could tell Garrett to fight for love when she wouldn’t do so herself. “I used to think you were so beyond me,” he said. “But you’re not.” Retaliating, she turned around and asked out Link, who, having been blown off so much himself, was stunned. When Bailey found Ben at home fixing the fence, he blamed himself for not having recognized the signs that she was in trouble. He hadn’t even built her the treehouse that he’d promised to. Except… oh! He wasn’t fixing the fence. He was building her that treehouse! So long as she never left him again, they were gonna be OK. (Whew.)

‘TAKE ME OFF THE VENT’ | After Garrett and Natasha called Grey Sloan’s doctors into her room and pointed out that, since she’d been there, she’d just kept getting worse, the patient asked them to let her die. “You may not have gotten that wedding under the stars,” she told Garett. But, turning to the docs, she added, “You gave us the rest of our lives together.” However brief the rest of her life had turned out to be. As the hour neared its conclusion, Mer told the couple that when she turned off Natasha’s vent, she couldn’t be sure how much time she’d have. As the almost-marrieds wept — me along with them, I can’t deny — Owen surprised Amelia with a bouquet of flowers. Just then, in strolled Koracick’s Valentine’s Day date — Teddy. And this was the first that Omelia seemed to know about their interest in one another. Alex soon called them into Natasha’s room, where the docs all held up cell phones with stars on them so she and Garrett could kinda have the wedding they’d dreamed of. After Mer read the bride’s vows, we cut to Richard and Catherine’s place for a tender moment that quickly turned passionate. “She’s back, baby!” Webber smiled. Once more returning to Grey Sloan, Natasha and Garrett were pronounced husband and wife, and not a moment too soon — she expired immediately after. Upon leaving the room, DeLuca stole away Meredith to the rooftop. “I’m supposed to be on a date,” she protested. “You already are” he said, revealing that he had a bottle of wine for them. Finally, we saw Koracick and Teddy on their mani/pedi VD date, complete with dinner, got a glimpse of Bailey and Ben, ahem, reuniting, and at last got DeLuca and Mer’s sexy first real kiss. (I’m not counting the drunken liplock he laid on her at Jolex’s nuptials — not after this.)

So, what did you think of “Girlfriend in a Coma” aside from, “Great, now I’ve got The Smiths stuck in my head!”? Teddy and Koracick’s kiss? Brittany’s whopper? DeLuca’s sexy date theft? Hit the comments.