“Freeze!” yelled no one in Thursday’s Grey’s Anatomy. Yet, due to circumstances beyond Owen’s control, he wound up frozen — as in paralyzed, and just when he was about to operate, too! Who leapt into action to ensure that the patient didn’t go from the O.R. to the morgue? What new intel did Meredith learn about would-be beau Link? And who, out of nowhere, seemed to have a possible course of treatment in mind for Catherine? Read on; this recap includes more details than a medical chart! 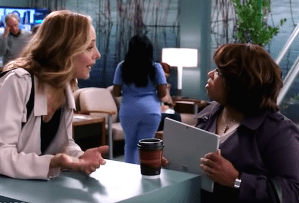 ‘WHAT, DO YOU LIVE HERE?’ | As “Help, I’m Alive” began, Mer and DeLuca were making eyes at one another in the O.R.; Koracick was asking for Amelia’s help with Catherine’s case; Bailey was checking in with her therapist and seemed to be making progress; and Richard was revealing his wife’s diagnosis to a guy we hadn’t seen before and asking the fellow to be his sponsor. At Grey Sloan, Teddy admitted to Bailey that she was having Owen’s baby, had an iffy relationship with Mer’s sisters and badly needed a job. “You’re gonna have to say all that again to Alex Karev,” Miranda told her. Nearby, Mer was mad that Alex had surgery when she needed his help with son Bailey’s superhero-themed birthday party. But her anger was nothing compared to Catherine’s. She was livid that Grey had blabbed to Maggie about her cancer. As such, “you’re fired from my team,” she told Mer, adding that Grey should stay out of her sight “until my fury passes.” 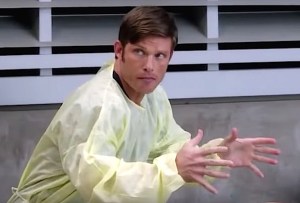 Outside, Mer found Link chilling while he waited for a trauma case to arrive. “No point stressing out until you have to,” he said, straightening up as the ambulance pulled in. The patient turned out to be a woman named Natasha who’d fallen from a hotel balcony, and arriving right behind her was Garrett, the guy she was supposed to marry the following day. “And I thought my wedding day was a mess,” said Jo. Shortly, Mer was taken aback when Link’s “whatever” attitude continued as they took care of the patient. He wasn’t even going to treat her pelvis before they took her to the ER. Afterwards, Mer marveled at how Jo ever could have thought that her old pal would be a good match for her. He didn’t help his case by jogging up to the O.R. to get the blood flowing and saying that they had to save the woman because she was getting hitched. Uh, “we have to save ’em all,” Grey snapped, “even the sad and lonely ones.” In surgery, Mer asked Link how the hell he ever became a doctor, relaxed as he is, prompting Jo to blurt out that he’d had cancer, that was what had spurred him to practice medicine. He then admitted that he hadn’t explained his reason for not treating the patient’s pelvis earlier because he hadn’t realized he had to prove that he belonged there. Later, when Mer admitted that Hulk — the Hulk, Link corrected her — had just cancelled on her party, the newbie volunteered to pitch in. As they decorated, he mentioned that he was enjoying the chase with her. Ha — why, because women usually threw themselves at him? she shot back. When the kids arrived, little Bailey asked Link, “Are you Thor?” 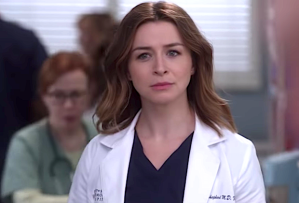 ‘ARE YOU SAYING IT’S MY FAULT THAT YOU AND AMELIA ARE BACK TOGETHER?’ | When Owen bumped into Teddy, she complained about having to “audition” for Maggie, “which is only slightly enraging,” and marveled at how weird it was that Alex was interim chief… aaand that was the first that her babydaddy had heard a word about her plan to work at Grey Sloan. So again (!), he was finding out big Teddy news after the fact. Sensing his anger — it was hard to miss! — she testily reminded him that she’d upended her whole life so that he could be a real father to their child. In response, he yelled at her for waiting five weeks after she returned to Seattle to tell him that she was expecting. If she’d informed him right away, he wouldn’t have been back together with Amelia yet. As he went on about the crap situation that Teddy’s delay had put him in, Amelia happened by. “I’ve had some excellent nicknames,” she said, clearly hurt, “but ‘crap situation’ might be my new favorite.” Nice going, Owen. Real nice. 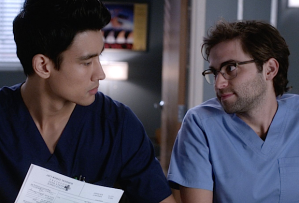 Later, after Koracick and Amelia kicked an ailing Owen out of their lab so that they could focus on Catherine’s case, Teddy went through the awkwardest job interview ever with Maggie, who snarked at her about the fact that she’d waited so long to inform Owen that he was going to be a dad. Still, Pierce promised that any minute, she’d “shove aside [her] personal contempt in favor of professional courtesy.” Meanwhile, Owen treated a woman who’d taken in her late sister’s kids and was exhibiting the same flu-like symptoms that he was. But it turned out that she had not merely the sniffles but a ruptured bowel. Just as Owen was about to begin life-saving surgery on her, a nurse accidentally injected him with something that was going to leave him paralyzed in a matter of… Thump. Just like that, he was on the floor, stiff as a corpse. He wouldn’t even be able to breathe on his own. While Levi ensured that Hunt didn’t die, DeLuca took over the surgery. When Alex quizzed DeLuca post-procedure, he stumped the resident by asking what he had to do next. Turned out, DeLuca had to do nothing next — he’d already done it all! Upstairs, when the medication wore off on Owen, Teddy asked him to kindly stop making everything her fault. “I’m having a hard time wanting to stay here,” she admitted. He could move to Germany, after all. His response? Come run trauma — he’ll work for her, she won’t have to work for Maggie. “Are you giving me your job?” she asked. “You’re giving me a lot more,” he replied. Meanwhile, Levi — high off saving Owen — pulled Nico into an on-call room and suggested that the change in him was his new beau, ahem, rubbing off on him. On the contrary, Levi had always been that good, Nico suggested. He just hadn’t realized it. (Nonetheless, the nookie was on.) 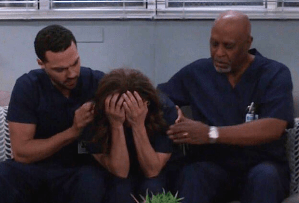 ‘IF YOU THOUGHT YOU MIGHT BE PERFORMING YOUR LAST SURGERY, WOULDN’T YOU WANNA GO OUT WITH A BANG?’ | Despite her dire diagnosis, Catherine prepped for an innovative surgery — her innovation, by the way — that would allow a patient to keep her uterus. The young woman was so grateful to the “pioneer” who’d be treating her that she didn’t even mind if other doctors watched from the gallery. “Full house,” Taryn noted as Dr. Fox began. At least one person in the gallery — Maggie — worried that Catherine wasn’t up to the task in her condition. But it turned out that she had no reason to be concerned. Catherine did great, despite her pain. So Maggie moved on to fretting over whether Jackson and Richard had made peace with their loved one’s prognosis. At the same time, Catherine discovered that the patient’s uterus had already been fried by radiation. Damn. Afterwards, as Maggie eavesdropped, Jackson, Richard and Catherine had an epic blowout about her decision to keep them in the dark about her cancer. Why wouldn’t she keep it from them? Good Lord, she yelled, “I’m gone for two days, and my husband has an arrest record!” As the guys tag-teamed her, she broke down as she cried that yes, hell yes, if she had to, she’d play the cancer card. Because being forced to discuss it with them was making it real.

‘SHE JUST WALKED IN WITH A MIRACLE, AND SHE LOOKS LIKE A MERMAID’ | Overhearing Koracick and Amelia arguing over Catherine’s (im)possible treatment, Jo jumped into the fray, and it appeared that she had an idea that just might save the day — and Richard’s wife along with it. “Who is she?” Tom asked Amelia. As the hour drew to a close, aunt-mom thanked DeLuca for saving her life and Owen for not letting her write off her symptoms, Catherine broke the bad news to her patient, and Hunt told Amelia that he had given Teddy his job. “I have to be able to make mistakes” — and be truthful, he said, adding that he missed them. “What took you so long?” she replied. Wait for it — he joked that he’d been, uh, paralyzed. Koracick introduced himself to Teddy and guessed that she was 16 weeks along. “Do you work at a carnival?” she asked. I never saw it coming, but in a matter of seconds, she was letting him feed her fries while she rubbed her feet. Elswhere, Levi tried — hard — to trade his glasses for contacts. “I wanna look as different as I feel,” he said before finally letting Taryn touch his eyeball since he couldn’t. Post-bday party, Link suggested to Mer that she liked him. At least “I don’t dislike you,” she answered. Which was an improvement over that morning. So much of one, in fact, that she didn’t check the text that she received — from DeLuca, saying that he’d flown solo on a surgery and inviting her to celebrate with him.

So, what did you think of “Help, I’m Alive”? Is anyone now leaning more toward Mer/Link? What do we think of a possible Teddy/Koracick matchup? Hit the comments.