Ken Jeong’s rule as king of The Masked Singer was sweet, but brief.

The erstwhile Dr. Ken started Wednesday’s episode wearing a medal and crown to celebrate his correct guess at last week’s unmasking. “Without me, none of this would be possible,” he quipped. But little did Jeong know, he’d lose the bling by the end of the hour, when one of his fellow panelists correctly figured out the booted singer’s true identity.

This week, Bee, Peacock and Monster joined Raven to perform for panelists Jeong, Robin Thicke, Jenny McCarthy Wahlberg and Nicole Scherzinger. Read on to find out who went home (and who he or she really is). 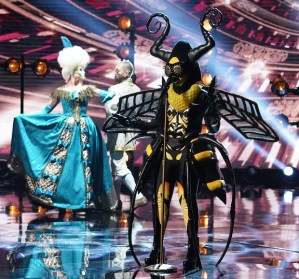 BEE | Bee’s mother told her to form a girl group when she was 8 years old, the winged one tells us in her clue package, and “It’s been peaches and marmalade ever since.” After Bee nailed Miley Cyrus’ “Wrecking Ball,” Scherzinger thought she recognized the way the performer held the microphone and guessed Gladys Knight, who the panelist had seen sing live before. And I concur. (My guess: Recent Super Bowl National Anthem chanteuse Gladys Knight.)

PEACOCK | I’ll admit it: The rainbow flag Peacock flashed during his pre-taped bit threw me a little, given the publicly stated beliefs espoused by the person I think is in the costume. But as he sang “All of Me” by John Legend, I remembered that one of my guess’ best-known roles was Joseph in Joseph and the Amazing Technicolor Dreamcoat. Technicolor = rainbow, I suppose, and now that I think of it, that flag looked more like the lining of Peacock’s cloak. And when his onstage clue was a long-haired wig, and he said “Because of this wig, I was thrown in jail”? Well, close every door to any other hunch I might’ve had, because now I’m certain. (My guess: Donny Osmond.) 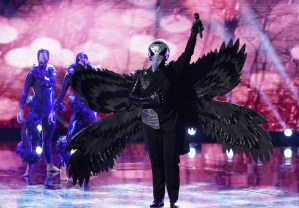 RAVEN | No offense, Raven, but you were the snooziest camoflaged crooner on the show this week. We get it: You’re not competitive, you’re a mom, and you’ve apparently got an Emmy, if your onstage clue is to be taken at face value. You sang Sara Bareilles’ “Brave,” and you did a pretty good job. (My guess: Ricki Lake.)

MONSTER | Ol’ fuzzy sings “American Woman” by The Guess Who, and he’s so good that Scherzinger is convinced he’s a professional warbler. I don’t know what to make of his prop clue — a headset with microphone attached — but I’m still convinced that my standing guess is correct. (My guess: T-Pain.)

THE UNMASKING | Raven got this week’s unmasking… and she’s former talk show host Ricki Lake, whom Thicke correctly guessed earlier in the episode. (Make sure to read our post-mortem with Lake for all the behind-the-scenes scoop!)

Now it’s your turn. Did you guess Raven’s true identity? Got thoughts on the remaining masked players? Hit the comments!