Fresh off the news that it had been renewed for a second season — admit it, you’ve already started wondering which “celebrities” they’ll nab for the next go-around — The Masked Singer pushed forward Wednesday with its mission to reveal all of its costumed contestants.

This week, Rabbit, Alien, Unicorn and Lion performed for panelists Jenny McCarthy Wahlberg, Robin Thicke, Ken Jeong and Nicole Scherzinger. Read on to find out who got a mask removed and a ticket home. 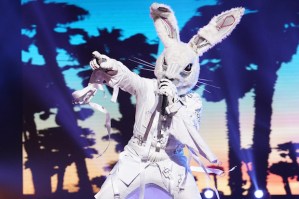 RABBIT | “I’m about to bust out some old school moves. I just hope I don’t pass out,” Rabbit said in his clue package, and I have zero idea if that has any meaning beyond than the Roger Rabbit he executed while expertly performing Bell Biv Devoe’s “Poison.” I had been leaning toward *NSync’s J.C. Chasez, but you all have convinced me. (My guess: Joey Fatone.)

UNICORN | Unicorn talked about “crafting” a new personality and added, “I’m proud of the hills where I come from.” She sang “I Love It” by Icona Pop feat. Charlie XCX like a karaoke regular: with a lot of exuberance but not a ton of finesse. And when I listened closely to her speech patterns this week, including that little giggle, it suddenly became clearer than ever. (My guess: Tori Spelling.)

ALIEN | “Happy” by Pharrell Williams was the resident extraterrestrial’s jam tonight, and she sounded a bit stronger than she has in previous weeks. Tonight was also the first time that I noticed Alien’s sequined gloves — perhaps a nod to the most famous, single-sequin-gloved one of all time? Plus, she said that police badge she showed off was real… (My guess: LaToya Jackson.)

LION | The golden girl laid to rest the panel’s doubts about her singing ability with a full-throated delivery of “California Dreamin'” by Sia, yes, but how about a little credit to the Mamas & the Papas, eh Masked Singer? I’m the least certain of this one, but regardless — (My guess: Rumer Willis.)

Now it’s your turn. Did you guess Unicorn’s true identity? Got thoughts on the remaining masked players? Hit the comments!