Legion‘s story is drawing to a close this year… but not before a much-anticipated family reunion.

The upcoming third season of FX’s mind-bending mutant drama will be its last, the network confirmed this week, and creator Noah Hawley says that was his plan all along. “I think endings are what give stories meaning,” he told reporters at the Television Critics Association winter press tour. “I always thought about this as a complete story with a beginning, middle and end, and it felt like a three-act story, and so this just felt like the natural place to end it.”

When Legion was renewed for Season 3 back in June, though, it wasn’t announced as the final season — a decision that Hawley chalks up to “maybe wishful thinking on the network’s part.” But he tells TVLine that “for me, it was always that… I feel like the most powerful version of the story is the most concise version of the story.” 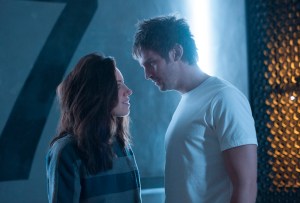 So where will we find conflicted mutant David Haller when the final season debuts in June? Last we saw David, he was using his formidable powers to escape prosecution and leave Syd and his Summerland friends behind — and in a Season 3 sneak peek screened for reporters, David is now the Zen-ed out guru of a hippy-dippy commune. “He has gone to a place to get what he needs, which is positive affirmation coming at him,” Hawley hints. “But he does it by feeding off the positive energy of his acolytes, and he gets all this positive energy by implanting that positivity in their minds. So he’s in this feedback loop. He’s no healthier, actually, psychologically, than he was before. He’s just insulated… and that insulation doesn’t last for very long.”

At the commune, David meets fellow mutant Switch, played by new cast addition Lauren Tsai. “She has this ability to travel in time, so she finds her way to David,” Hawley teases, adding that it just so happens that David “has a plan that he needs a time traveler for, and that’s basically our jumping-off point” for Season 3.

Also debuting in Season 3: David’s famous father Charles Xavier, aka X-Men leader Professor X, to be played by Game of Thrones alum Harry Lloyd. (Mr. Robot‘s Stephanie Corneliussen will play David’s mother Gabrielle.) We’ve only seen a glimpse of Professor X’s wheelchair so far on Legion, so his arrival should help David piece together his own origin story. “David is an adopted boy who needs to know who he really is, so we’re definitely going to tell that story,” Hawley confirms. “We’ll meet them in the third hour this year.”