If you thought Legion might tone down the weird for Tuesday’s Season 2 finale, it opens with David singing (singing!) The Who’s “Behind Blue Eyes” while levitating across a field. So there’s your answer!

David immediately faces off with Amahl Farouk in a climactic, if purely mental, battle: Huge animated avatars — David’s is green, Farouk’s is red — battle with swords and transform into animals while David and Farouk just stand there. It looks like Farouk has the upper hand… until Lenny, perched far away with a sniper rifle, fires a round at that tuning fork, hitting it with a loud clang and knocking David and Farouk to the ground. That neutralizes their mutant powers, so when David gets up first, he grabs a rock, ready to bash Farouk’s skull in. 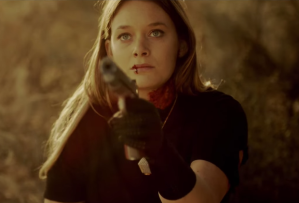 After a quick flash-forward to three years later, with Oliver and Melanie happily reunited inside his ice cube — they sip Martinis together and dance to Big Band jazz — we return to David, who’s beating Farouk to a bloody pulp. He’s interrupted by Syd, though, who arrives holding a severed minotaur head: “We need to talk.” She points a gun at her beloved David, and says she now understands he’s not the good guy: “I’ve seen your true face. You hid it so well.” He protests, telling her he loves her, but now she believes her future self was sent back to prevent the destruction of the world by… David. “Don’t you trust me?” he asks. “Maybe I just trust myself more,” she replies, before firing a bullet at him. He flinches… and wakes up in his childhood bedroom. (Of course he does.) 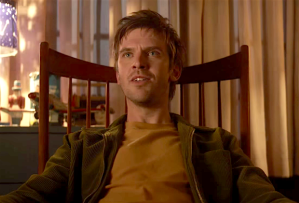 There, he’s taunted by another David (of course he is), who yells at him that he’s delusional. Original David insists he’s not delusional, he’s powerful, but Other David points to the first moment he saw Syd at Clockworks as the moment his delusion began. Then a third David (!) appears, telling Original David that he is a god, and Syd was just a parasite. The three Davids eventually settle their differences, though, and agree on a course of action, as we see that Lenny fired a sniper round that deflected Syd’s bullet and saved David’s life. (Nice shot!)

Division 3 arrives on the scene, and Cary plants a power-neutralizing crown on Farouk’s head as they take him away, intending to put him on trial. (Lenny gets led away in handcuffs, too.) When Syd comes to, David just tells her she “had a bad dream.” Back at headquarters, he tells the other Davids he wants to reconnect with Syd and then finish off Farouk for good, and he goes into a meditative trance, projecting himself into Syd’s room, where they exchange “I love you”s and fantasize about running off to a farm together. “It’s over. We won,” he reassures her before they make love… but she doesn’t seem reassured, does she?

David projects into Farouk’s cell the night before his trial, informing the villain that “if they don’t kill you tomorrow, I will.” Farouk counters with a gut punch: He knows David suppressed Syd’s memories of their standoff — it was “just a bad dream,” remember? — so she won’t stop loving him. Cary, using a techno contraption to see what happened that day, sees the same thing, muttering, “It’s treachery.” Plus, Cary’s crown doesn’t hold Farouk for long: He meditates and shorts it out, sending a mouse to crawl into Syd’s room and whisper in her ear while she’s sleeping. (I’m getting a bad feeling about all of this…) 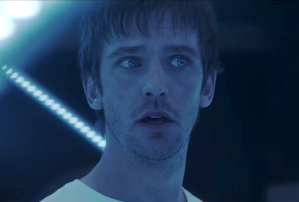 The morning of the trial, David shows up to testify against Farouk… but as he enters the room, he’s trapped inside an energy sphere as Syd looks on. He’s the one on trial, actually, accused of “future crimes” that Admiral Fukiyama’s minions deem have a 98 percent probability of happening. Farouk testifies against him, calling him “a sweet boy undone by revenge.” Then a stone-faced Syd drops a bombshell, telling him, “David, you drugged me and had sex with me.” (Yikes. Guess Farouk’s mouse told her that.) He’s informed by the tribunal that he needs to go back on heavy psychiatric medication: “You will allow treatment, or we will be forced to terminate.”

David is dumbfounded, and feeling utterly betrayed by Syd, snaps into action: “You had your chance.” He summons his powers, and before they can pump enough gas into the sphere to stop him, he shatters the whole thing, levitating in a burst of light and then vanishing. (Cary, you really need to work on your mutant-containment technology.) David heads to Lenny’s cell to free her; when she asks what happened to “Blondie,” he replies: “There ain’t no Blondie no more.” Guards arrive and shoot at them, but David blocks the bullets before he and Lenny vanish. Syd rushes to the scene, asking Clark, “What do we do now?” His response? “Now, we pray.”

Now it’s your turn, Legion-aires: Grade tonight’s finale, and Season 2 as a whole, in our polls, then hit the comments with your post-finale thoughts.