Outlander‘s John Bell says the show’s Season 4 finale, in which Young Ian must say goodbye to his family and start a new life in a Mohawk village, presented a real acting challenge — but not the one he expected. 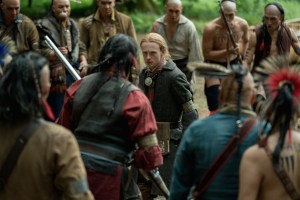 The actor tells TVLine that Ian’s tearful farewell to his aunt and uncle was, indeed, highly emotional to shoot. But the part of the episode that required the most work was Ian’s passage through the Mohawk gauntlet, the group beat-down that Roger endured — and failed — in an earlier episode.

“It was quite funny, because of course Richard [Rankin, who plays Roger] had to run it at first, so he gave me the lowdown on what to expect, and he certainly didn’t hold back,” Bell says. “We spent about two days rehearsing it, so about 50 First Nation Canadians were involved in that. I was running up and down that gauntlet, jumping and springing around like a ninja.” He laughs. “It was just the most fun! So when it comes to actually film it on set, I had to remind myself, ‘You’re not supposed to be enjoying this!'”

Executive producer Toni Graphia says that the moment Ian makes it to the end of the trial is a “victory.” She adds, “He has lost his family, but he’s gained a new family, and he’s excited. He’s a young man on an adventure.” Like Jamie, she points out, Ian is a man subverting what was expected of him in order to forge his own path. “To him, this is a great adventure.” (For more of Graphia’s thoughts on the episode, go here.) 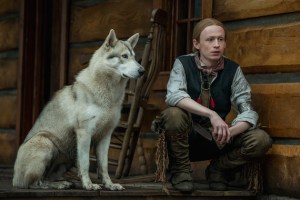 “He doesn’t feel like he’s made the wrong decision,” Bell says, noting that the hour — and Ian’s emotional goodbye to his uncle —is a fitting answer to where his character was at the start of the season. “My first thoughts were on how beautifully it harkens back to… that moment way back in the beginning, where Jamie is comforting him about PTSD,” he says. “It’s really beautiful to see the two men open up.” (Side note: Later in the interview, Bell remembers that during the filming of that grave-digging scene, Dewey — aka the dog that plays Rollo — “was moaning, yelping and barking whenever I would break down, because he wanted to run over and help me.”)

When Ian announces in Episode 3 of the season that he’s not going to return to Scotland, the lad thinks he’s fully matured, Bell observes. But it isn’t until he trades himself to the Mohawk in exchange for Roger that he truly comes into his own.

“When it comes to that moment,” he adds, “that is when he really becomes a man.”

[BOOK SPOILER ALERT] Ian continues to play a part in Diana Gabaldon’s novels (on which the Starz series is based) beyond Book 4, though he is out of the action for a good chunk of time. Bell can’t saw how his character’s storyline will play out in the TV show’s fifth and sixth seasons, “but I also think what’s important for Ian is that he has time to change,” he says. “We’ve seen him grow an incredible amount over the past two seasons, but his journey is not over yet.”