The raging, shifting winds of change ripped through Fox’s planned live broadcast of Rent late Saturday. When they were done, cast member Brennin Hunt was left with a busted foot and a broken heart.

In an interview Monday with TVLine, Hunt says he took a tumble on his way to a quick costume change before the Saturday rehearsal’s final segment. A long night at the emergency room and conversations with executive producer Marc Platt and the rest of Rent‘s production team followed, with the ultimate decision to air the recording of Saturday’s unedited dress rehearsal on Sunday — save the finale, which Hunt and his castmates would perform live. 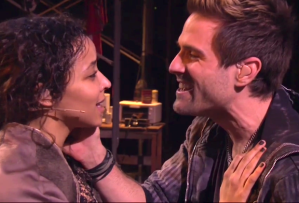 Roger usually spends most of Rent‘s final scene sitting on a table, hunched over a dying Mimi. When Fox switched from the taped dress rehearsal to the live performance near the end of Sunday’s broadcast, viewers saw Hunt’s Roger, seated at the table with his foot — in a cast — propped up on a chair. That’s where he stayed throughout the ballad “Your Eyes” and the show’s finale, as well as the cast’s onstage “Seasons of Love” singalong with members of the original Broadway company.

When Hunt returned to the production early Sunday, “I got a warm welcome in the loft in the center of the stage. It made me cry again,” he says. “It’s totally what this musical is: We’re a family, and we love each other. I feel like that came across. And I know some people are disappointed that it wasn’t live, but honestly, it was live. It just happened 24 hours before. It’s not like they edited the vocals or tweaked them.” He laughs a little. “It’s been a lot of emotions over the past 48 hours.”

Below, Hunt gives us the lowdown on exactly how he hurt himself, what was going on in Los Angeles while the rest of us were watching the broadcast and how one member of the original Broadway company boosted his spirits at the end of Sunday’s show.

TVLINE | How are you feeling?
They’ve got me on some good meds, so I’m all right. I might be a little spacey. We’ll see.

TVLINE | Tell me about the dress rehearsal and when things went sideways.
So basically after “What You Own,” when Jordan [Fisher] and I climb the ladder and rock out with the band at the very end, we have a commercial break right after that and before finale. He and I both have a quick change all the way across downstage and the studio. So we have to run the scaffolding, down two flights of stairs. And on that second flight of stairs, when I jumped off and was turning the corner, my right foot just rolled on top and the top bone of my arch snapped. I went straight down. It was pretty brutal. It was so loud, I could hear it, even with my in-ear monitors in. I felt like it broke, but I was trying to tell myself that it didn’t.

Yeah, it was pretty rough. But everybody showered me with love. Honestly, it turned out to be such a beautiful thing. It’s the essence of Rent: My family surrounded me giving me love, encouragement and positive energy. I couldn’t have asked for a better team of people around me.

TVLINE | The moment that you heard the snap, what were your immediate thoughts?
I thought to myself, “I’ve ruined the show for everybody,” because they’ve been planning this for years. We’ve been rehearsing for months and months and months. All of that negative stuff started coming through my head, the tears and all of that. [Executive producer] Marc Platt came over to me and said, “Calm down. You didn’t ruin anything. Quit apologizing. We’ll figure this out.” He was just super sweet. He came to the ER with me, every step of the way.

TVLINE | At the end of Sunday evening, Fox tweeted some clips from the concert version, and people watching at home saw the cast perform the end of the musical live. Did you perform the entire show live Sunday? Or was it bits and pieces for the live audience in Los Angeles?
We did a few things… We came out for Act II and pretty much performed, in concert style, for that live audience, while the broadcast was going on in sync. But it wasn’t the [planned] staging. We would literally just move from one section to the next. We were just improvising. And it turned out to be such a beautiful evening. I’m so glad that they captured it, because there were so many beautiful moments from last night. I hope that they release all of that at some point. I had a fun point with “Another Day” with Tinashe, wheeling around in a wheelchair. She’s pushing me around. And again, I can’t reiterate enough how it is the essence of love. What we had last night, that is the real-life Rent… I think they’ll release it at some point.

When we got to the finale, we prepared to go live again. It was interesting, to say the least, trying to perform with my foot propped up and having to pick her up off the table with my hamstrings being tight and all that. But we somehow got through it. I think it was beautiful. I’m very grateful that all the producers allowed me to come out and finish the show with my castmates and to do that portion live. I’m very grateful we did it that way.

TVLINE | Was there any point when you were thinking: “I can still do this”?
Marc and I were at the ER until, I think it was 1:30, 2 in the morning, just waiting on the CT scan, because the x-rays, they couldn’t tell — there was so much swelling — if it was broken or not. So we were hoping for the best that it was just a bad sprain and I could get some injections and just get through the performance with as little pain as possible. Then they came back and gave us the bad news that it was broken and if I put any pressure on it, I’ll have to have surgery. Marc was like, “We’re not going to do that. We’re protecting you, and it’s not worth it. We’ll figure it out.” The producers made it work, and I cannot thank them all enough for all of their hard work. They put in so many extra hours to try to figure out what to do to put this thing together.

TVLINE | Roger is on that table for most of the end of the show. Obviously, your foot was propped up, but I’m not sure that people who aren’t familiar with the show would necessarily have noticed.
[Normally,] I kind of move around a little bit in the “Santa Fe” reprise, and I pick [Mimi] up and carry her into the loft. So those are the only things I couldn’t do. You’re right. I ended on the place where I usually end anyway in “Your Eyes.”

TVLINE | Obviously, it wasn’t the plan to have you hanging back on the table while the original cast was singing “Seasons of Love” at the end.
Right.

TVLINE | What was running through your head while that song was going on?
I was just trying to soak it all in. I was kind of like a spectator just watching this magical thing go down. And then Adam Pascal made his way over to me and hugged me, and he actually said something very sweet and funny. He said, “I know you probably don’t want to hear this right now, but” — he pointed at my foot — “that’s the best thing that ever happened to you. You’re trending everywhere right now.” [Laughs]