Oliver Queen’s got a brand new bag when The CW’s Arrow resumes Season 7 tonight at 8/7c.

As revealed at the close of the (terrific) midseason finale, Star City’s infamous vigilante is now working unmasked as a consultant for the SCPD. That will stir conflicts, showrunner Beth Schwartz says in the Q&A below, as well as set Oliver’s wife Felicity on a mission.

TVLINE | Get me excited about “Oliver Queen, SCPD-sanctioned fighter of crime.”
Having our entire series based off the vigilantes not being in partnership with the SCPD, we found it super-exciting in the writers room to make this happen. But it’s not going to be without conflict. And the rest of the team is going to have to find their way as well, to figure out how this is all going to work.

TVLINE | The “Elseworlds” crossover seemed to do some damage control with regards to Oliver and Felicity. Would you say they’re back to 100 percent? 90 percent? 80…?
I would say 100 percent.

TVLINE | But will we still see Felicity on edge, getting darker?
She definitely has a lot going on in the second half — specifically figuring out what she’s going to do now that Oliver’s back, and how she’s going to fit into his new role working for the SCPD, while also doing her own thing. She’s going to start getting back to creating tech and doing things to help the world.

TVLINE | Because there is a dilapidated Smoak Tech in the future….
Yes, yes. We’re going to see the origin story of that. 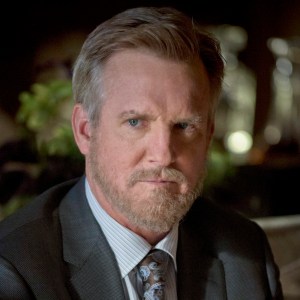 TVLINE | I find it a little convenient that the half-sister Oliver doesn’t know he has is a trained vigilante, just like him — if only because he was only outed a few months ago. Will that make more sense once we get into her backstory?
It will. We’re going to find out a lot more about her in [Monday’s Episode] 10 — where she came from, who her mother is, why Robert [Queen] kept her a secret, what her mission is…. We’ll keep unraveling that as the season goes on.

TVLINE | Are you able to do that without Jamey Sheridan, or will he come back for flashbacks as Robert?
Well… we have him coming back, but not necessarily on-camera. There will be a fun surprise with him in 10. 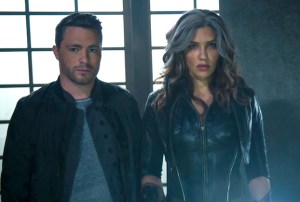 TVLINE | I have to say, you’ve got me puzzling over the flash-forwards; I even wrote a whole think piece about them. Is this the future or a future?
This is the future as we know it, but we haven’t even scratched the surface of it yet. We’re going to be revealing what’s behind the wall at The Glades, and in 10 we’re going to see out first glimpse of how the other, better half are living. We’re actually going to have an all-future episode, [Episode] 16, which will answer all the questions, including the backstory of Blackstar (Shadowhunters‘ Katherine McNamara), how she came to be in this group…. There are more surprises ahead as we fill in the blanks about what has been going on. That episode is titled “Star City 2040.”

TVLINE | Speaking of Blackstar, should we read anything into the fact that Roy wasn’t present when we first met her? I was wondering if it’s because he would recognize her.
Oh, no — he doesn’t know her.

TVLINE | Really?
Yep. He doesn’t. [But speaking of Roy] we’re definitely going to answer why we found him banished on Lian Yu. We’ll get to know more about that. 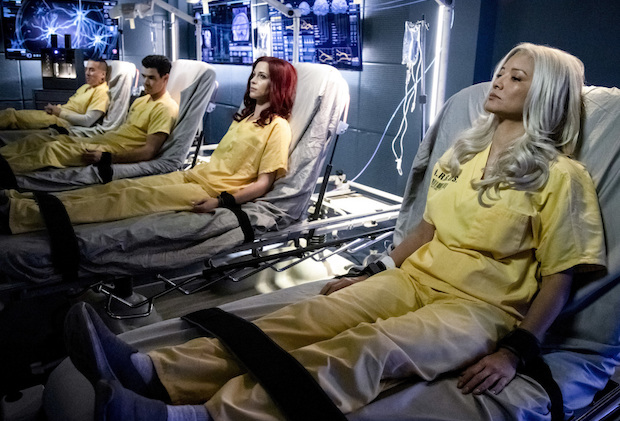 TVLINE | The “Ghost Initiative” that Diggle and Lyla put together in Episode 11 (airing Jan. 28), comprised of Diaz, China White (played by Kelly Hu), Cupid (Amy Gumenick) and Slade’s son (Liam Hall) — is this your workaround to not being able to use the Suicide Squad?
It’s a new group but with the same kind of M.O. as the Suicide Squad. Diaz is going to be our leader of that, which is really fun. We’re going to get to see a lot of that in 11, which is [cast member] David Ramsey’s directorial debut. He did such an amazing job; I just had the mix this week and it’s so much fun seeing China White back, and Cupid and Kane Wolfman, with Diaz leading the charge. It’s a really, really cool episode.

TVLINE | Is whatever Diggle and Lyla are up to with the Dante painting going to dovetail with the bigger picture?
It will, yep. It will all come to a head. You’ll see, we’ve been playing the long game with that one.

TVLINE | The synopsis for 11 also says, “Oliver and Laurel are haunted by the past.” What more can you say about that?
We are going to find out more about Laurel’s backstory on Earth-Two, which is really cool. And Oliver is sort of going to be haunted by the consequences of him being outed. The episode looks at the consequences of him being unmasked and everyone knowing who he is.

TVLINE | What else is coming up for Laurel in the second half of the season?
Well, we are doing a Birds of Prey-inspired episode, that she will be involved with. And we’ll get to see what happens in her overall arc, in her redemption story — whether she is really redeemed as Black Siren and did she really turn over a new leaf, or is she still the same evil Black Siren that we saw last season.

TVLINE | Birds of Prey is of course a group of people. I suppose you’re leaving us to guess who the other team members might be…?
Yep.

TVLINE | I asked The Flash‘s Todd Helbing a similar question: Is there anything that Arrow needs to do with the remainder of its season in service of next fall’s “Crisis on Infinite Earths” crossover?
It’s possible. It’s possible….