With Oliver Queen’s release from prison, The CW’s Arrow is similarly freed — to sufficiently shake things up, while keeping the basic premise intact.

I watched this week’s eventful episode, “Unmasked,” twice before it even aired on Monday night, it entertained me so much. That’s why I felt compelled to review it here versus offer a rote recap. I mean, nary a second of this episode went wasted (save for whatever the Dante painting is about, other than forcing Diggle to ask Diaz for help). Instead, the fall finale dove right into exploring what Oliver’s world looks like as a freed man known to have once been Star City’s resident vigilante. And in doing so, it addressed things I didn’t even think to wonder about.

Mayor Pollard is a pint-sized pill, as Rene basically put it, but in that capacity she frames a new conflict for That Which Was Once Known as Team Arrow: How can Oliver continue to save his city, in a no-vigilante climate? Dinah in turn was cued to wonder if she should suit back up as well, or can she better serve justice as the SCPD captain? Even Rene was pointed down a new and unexpected path, when D suggested he might effect change as a politician. (Suggested campaign slogan: “Vote for me, Hoss!”)

And then there is Felicity, who had been pressed to redefine herself in Oliver’s absence, while still squarely in Diaz’s crosshairs. Arrow it turns out is going all in on this arc, as evidenced by Oliver’s reaction to his wife’s brandishing of a gun to fend off an imposter archer’s home invasion. I ask, have you ever seen Oliver look at Felicity the way he did, with such a blend of disbelief and disapproval? Regardless of your agenda, it had to shake you. Even more so as wife and husband got to putting their feelings into words. 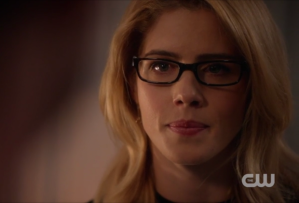 And if that didn’t outright lay you out:

The words were raw. They landed with impact. And with the seven episodes that preceded this, the foundation for Felicity’s new temperament was soundly established. Oliver has a new lease on city-saving life, sanctioned SCPD muscle (take that, Pollard!) — but for how much longer with the ever-“ruthless” Felicity stay a part of it? 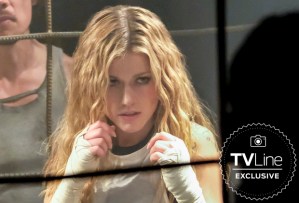 Now, let’s talk about how fun, fun, fun this episode was, in ways small and large. Max freakin’ Fuller. The callback that no one anticipated not only offered up great parallels to the last time we saw him running a club, it figured into a major plot point. What’s more, said club dovetailed with this week’s flash-forwards, where the glitzy establishment has decayed into a squalid street fighting arena and “BlackStar” is a main attraction. Katherine McNamara’s character (aka Maya) made quite an entrance, semmmi-convincingly delivering a smackdown, before giving Future William, Dinah and Zoe (but not Roy, hmmm….) a minute of her time. (“Asking questions about Felicity Smoak will not end well for anyone”??)

The future timeline dropped other new breadcrumbs, as Dinah explained to William the “Mark of Four” symbol that represents the pillars of heroism — courage, compassion, selflessness and loyalty — and which was found inside Oliver’s bow buried in Lian Yu. But in speaking of Oliver, Dinah used words such as “the strength that made him a hero” and, “Your dad had this way….” Is Oliver, like Felicity, also dead at this point? Or is he simply very much out of the game? Next stop: Future Rene. 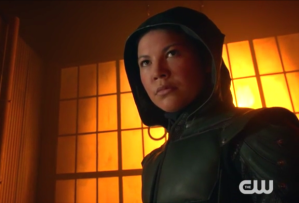 Lastly, yet up first in the hour, you had the reveal of the new Green Arrow. And regardless of whether you already sensed it was a woman, or had heard it was a half-sister of Oliver’s, seeing her train and then suit up, later capped by the visual of her standing beside Robert Queen’s grave, with the canonically torched family mansion in the distance, had to leave you stirred. “Oliver’s more like you than I thought,” the young woman (played by Sea Shimooka) said to her father’s headstone following an encounter with the OG GA. “But I’m not giving up. Not ever.”

THE TVLINE BOTTOM LINE: In setting the new stage for the characters’ and thus its own future, Arrow hit the bull’s-eye with its pre-crossover fall finale.