Question: Is Grey’s Anatomy really going to kill off Meredith’s father? — Hallie
Ausiello: Given that Richard told Grey back in “Flowers Grow Out of My Grave” that Thatcher was 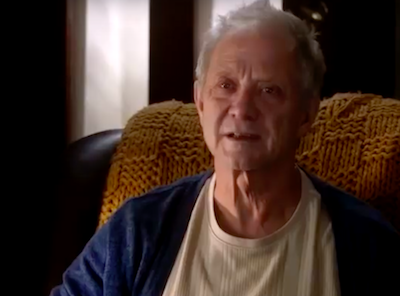 in hospice with only a few weeks to live, the prognosis sure ain’t good. And when I recently asked Ellen Pompeo about Scandal vet Jeff Perry’s previously announced return as Mer’s estranged dad, all she’d disclose was that although “it’s a sad episode,” the two of them do manage to get some closure to their relationship. WARNING: This edition of AA is very Grey’s-heavy; don’t @ me.

Question: What are you hearing about Jackson’s “other woman” on Grey’s? Will we meet this Kate? — Tammy
Ausiello: You’re not the only one who’s eager to lay eyes on the woman with whom Maggie’s boyfriend bonded at the monastery. “I’d like it” if she turned up, Jesse Williams told me during a recent visit to the set. “It’s drama. There hasn’t been a hint of it [in the scripts thus far], but you know what? I’m gonna send a text message to [showrunner] Krista Vernoff.” OK, just as long as he doesn’t end that text with multiple heart emojis! Speaking of casting moves Williams can get behind… 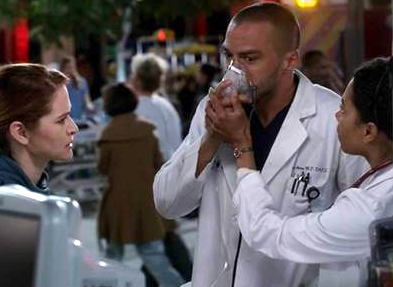 Question: Please tell me Grey’s Anatomy is going to bring April back this season. She still lives in Seattle. It would make sense! —Dottie
Ausiello: Williams tells me he “would love” for Sarah Drew to check back in, adding that his former co-star remains “one of my favorite people in the world.” And as the actor points out, the storyline
would pretty much write itself. “April is local and we share a kid together, so it would be an opportunity to highlight what it is to be a co-parent, or what it is for April to be a third wheel in my relationship with Maggie,” he says. “It’s real-life. Most marriages end in divorce which means new people come into our lives and you have to co-exist. You don’t see a lot of that on broadcast television.”

Question: Any scoop on Grey’s? —Brendan
Ausiello: Nobody knows at this point what will go down in the Season 15 finale. Not even Krista Vernoff! “There are certain stories that I know need to culminate in the finale, but in terms of what the event is, I don’t know yet,” she confesses. “This time last year I knew we would have the three weddings.” BONUS SCOOP: An upcoming episode will feature several mini-time jumps.

Question: Will we start seeing The Flash‘s Iris create the Central City Citizen soon? –Anthony
Ausiello: “Yes,” showrunner Todd Helbing told Matt Mitovich. “And it is cool.” The EP went on to say that in the back half of Season 5, “Iris has realized she stopped [news reporting] for whatever reason, but there’s something that motivates her to go full bore.” What caused the brief pause? The “Flash Vanishes in Crisis” newspaper headline from the Time Vault “carries a lot of baggage with it,” Helbing explained, “but it’s a hurdle that Iris has to get over before she can go full steam.”

Question: I’m currently rewatching Greek on Hulu, and then it suddenly dawned on me, wasn’t there supposed to be a reunion holiday movie on Freeform? What happened with that. —Brandon
Ausiello: This happened. And it sucks. 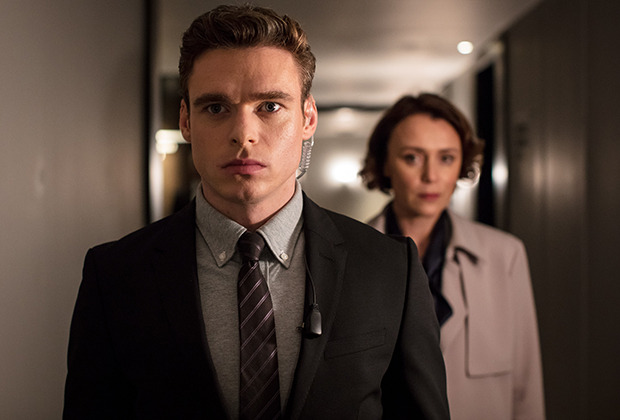 Question: Just finished Bodyguard on Netflix, and loved it. Any chance of a Season 2? —Oscar
Ausiello: No official word from Netflix yet, but star Richard Madden sounds like he’s on board. “We’re very open to it,” he told reporters after his surprise Golden Globes win for Best Actor in a Drama Series, adding: “You’re going to have to speak to [creator] Jed Mercurio… hopefully he’s going to have some genius ideas.”

Question: Any scoop on Season 5B of HTGAWM? —Symonne
Ausiello: In the wake of last November’s bombshell that Gabriel is Sam Keating’s son, Michaela will quickly put the brakes on whatever romance was forming between her and her classmate. “Once everything’s out in the open, and the Keating Four knows who Gabriel is, Michaela’s perspective is that she feels used,” reveals Rome Flynn, who plays Gabriel on the drama. “Maybe she was just a tool to get Gabriel closer to Annalise. We’ll find out what Gabriel’s perspective was, and what his motives were [with Michaela]. But it’s a sticky situation for both of them.” 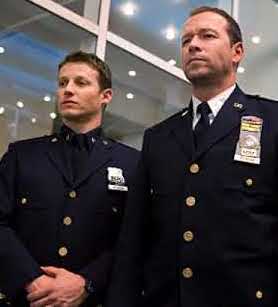 Question: How about some info on Blue Bloods — you haven’t given anything on them in a long time. —David
Ausiello: You’re right. It’s unacceptable. I apologize. Here’s a make-good: An upcoming episode finds sibs Danny and Jamie having an epic blowout when the former flagrantly disobeys a direct order from the latter during a tense hostage situation.

Question: The Passage is one of my favorite books. Please tell me anything you can about the show. —Nancy
Ausiello: How about this? Series star Mark-Paul Gosselaar tells TVLine that of all the characters in Justin Cronin’s sci-fi novels, Lila (played by Emanuelle Chriqui) “has changed the most from the books. Because [in the novels] Lila sort of disappears, and then she comes back in Book 2. But she’s a very big part of our story.”

Question: I’m worried Outlander isn’t going to be able to fit everything left from Drums of Autumn into the last two episodes of the season. Should I be worried? —Terry
Ausiello: I tossed this one to TVLine’s Outlander expert Kim Roots, who reports: “Given Starz’s secrecy requirements regarding spoilers, here’s what I can say about the end of Season 4. There’s a simplification in a storyline that makes a lot more sense than the way it happens in the novel. There’s a change in the timing of [Spoiler] that I understand, though I longed to see it play out as Diana Gabaldon originally wrote it. And there are two scenes, back-to-back, that had me hooting out loud in joy. Overall advice? Dinna fash.” 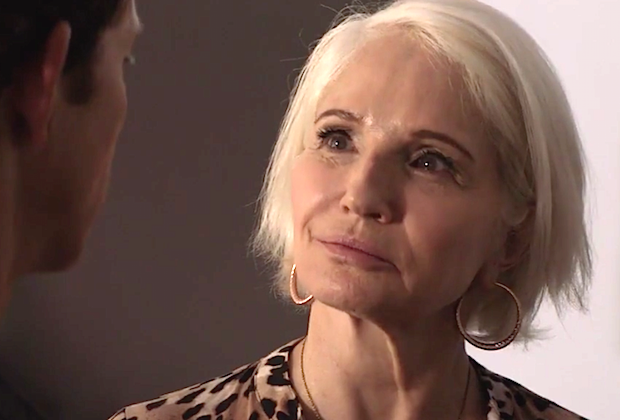 Question: Any scoop on Animal Kingdom Season 4? — Michelle
Ausiello: Going forward, the TNT drama may be flashing back — a lot. We’re hearing that the hunt is on for a twentysomething actress to play what sounds an awful lot like Smurf before she became the cutthroat queenpin we all know and love (to hate). So either we’re going to be hitting rewind for a telling of Mommie Dearest’s origin story, or the Codys’ matriarch is about to get her own Mini-Me.

Question: Now that we know when The 100 is coming back, do you have any Season 6 scoop you can share? — Kate
Ausiello: The Powers That Be are choosing to remain tightlipped — even more than usual — about the upcoming season, but TVLine has learned that we’ll be meeting a powerful warrior named Kaia, a charismatic leader with uncertain loyalties. She’s going to shake up the characters’ (new) world in a big way, and if the show continues beyond Season 6, she’ll likely have a place in it.

Question: Is Atwater ever gonna get a romance on Chicago P.D.? —Rebecca
Ausiello: No news on the nookie-nookie front, but the detective does have “a very powerful” hour coming up in Episode 13, which finds LaRoyce Hawkins’ alter ego ensnared in a racially-charged “officer-involved shooting,” showrunner Rick Eid reveals. BONUS SCOOP: The episode also features the return of Wendell Pierce as Alderman Ray Price.

This AAnd That…
♦ SUITS: “A lot happens” in the Season 8 finale, declares showrunner Aaron Korsh. “Some really good stuff in terms of positive things happening for our characters, but it also has really sad things 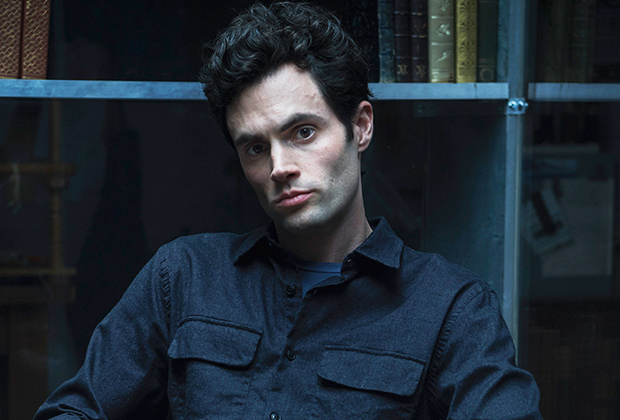 happening. [And] it definitely ends with a punch.”
♦ YOU: Fresh off that buoyant ratings report, here’s a little scoop on Joe Goldberg’s journey out west: Among the Angelenos crossing paths with Penn Badgley’s character in Season 2 of the Lifetime — er, Netflix — drama will be Calvin, the quirky manager of a high-end grocery store desperate to suppress his insecurities by any means necessary. The only question is: Just how badly will Joe wreck this guy’s life?
♦ ELEMENTARY: Rumor has it that a pivotal deceased character will loom large-ish in the forthcoming series finale. Guesses?!
♦ MR. ROBOT: Production on the Rami Malek drama’s fourth and final season commences at the end of February in New York City.