Thursday’s Grey’s Anatomy sent to Los Angeles Meredith and Koracick not just to find out whether anyone might still be tempted to ship them after seeing the look that she and DeLuca exchanged in “Flowers Grow Out of My Grave” but to consult on a case for Catherine that was so hush-hush, you couldn’t help but wonder if the patient would turn out to be Catherine herself. Aand… ? Did the patient turn out to be Richard’s missus? Read on, and besides answering that question, we’ll go over how Jackson got caught chatting up women other than Maggie, and why a Grey Sloan nurse suddenly became a Grey Sloan patient. 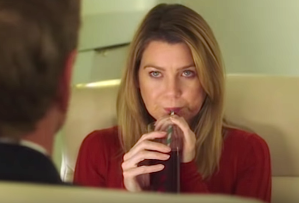 ‘[DEREK] THOUGHT IT WAS FITTING THAT MY NAME HAD ‘ASS’ RIGHT IN THE MIDDLE OF IT’ | As “Anybody Have a Map?” began, Richard woke up to find that Catherine had stayed in L.A. for an extra day to work on the foundation; Jackson and Maggie woke up already going at it — and with his cell phone blowing up; and Koracick discovered that Meredith, too, had been summoned to the City of Angels by Catherine. At Grey Sloan, Nurse Frankie — 28 weeks pregnant with a baby that she intended to call Lil’ Pancake — collapsed in front of longtime colleague Richard. Examining her — with protective Nurse Ginger hovering — Webber discovered that the patient had a wandering spleen that was cutting off the baby’s blood supply. Frankie argued that the issue might resolve itself, and she was willing to take the risk of waiting for treatment in order to protect the kid that she’d paid a fortune to get pregnant with. “I literally have all my eggs in one basket,” she said. Ultimately, Richard said OK, but he intended to closely monitor her. So did Ginger, for that matter. And apparently Grey Sloan’s whole nursing staff. 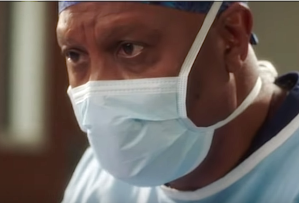 After Frankie’s condition stabilized, Richard performed an ultrasound and noticed that her spleen had begun to untwist. Despite the good news, she noticed that he was cranky. How come? Reluctantly, he admitted that it had been hard losing Ollie. Shortly, Frankie developed fluid in her abdomen, and Richard had Alex paged. If Lil’ Pancake had to come out then and there, he wanted the best doctor available on hand. As Webber operated on Frankie, determined to keep the baby in utero, he very much felt the pressure of doing right by all the nurses. Alas, no sooner did it appear that he’d saved the day than Frankie’s condition worsened again, and Lil’ Pancake had to be served.

Fortunately, Alex was able to keep the newborn alive. Unfortunately, Richard wasn’t able to keep Frankie alive. This was gonna hit him like a ton of bricks, you could tell even before he had to face Ginger and the other nurses. (No tears fell, but oh, they were written all over his stricken face.) Later, Richard attended an AA meeting but left upon hearing about a bar that was giving out shots for chips. Taking a seat, he put down an eight-year chip and ordered vodka — lots and lots of vodka. Instead of take a sip, however, he took the bat from behind the bar and started smashing up the place. You go, Richard! Finally, he let out the sadness and the rage that he’d carried since losing Frankie on the operating table. 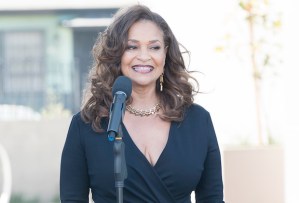 ‘THAT’S NOT THE ONLY REASON I CALLED YOU HERE’ | When Meredith and Koracick arrived at the Catherine Fox Medical Center, Catherine explained that their patient was a 65-year-old woman who’d complained of neck and back pain. Turned out, the patient had a tumor that had invaded both the vascular and nerve domains — and yes, the patient was indeed Catherine. Though she needed a biopsy, she wasn’t willing to postpone the ribbon-cutting — or fill in Richard and Jackson till she knew what she was dealing with. In the O.R., Koracick and Mer bantered over Catherine’s biopsy as if they were on a sorta testy but complimentary first date. (And yeah, sorry, DeLuca; I do still kinda ship the idea of Mer and Thomas. Kinda.) As Catherine came out from under anesthesia, Koracick joined her in a duet of “You Can’t Take That Away From Me.” Once Catherine was back on her feet, the trio went for drinks, and the patient challenged “Tommy” and Mer to give it to her straight, even if the test results weren’t yet back. She also admitted that she was reluctant to confide in Richard. “I don’t know if he can handle this,” she said. Just then, Koracick learned that the biopsy results were back. Before they set off to find out what they said, they had one last stiff drink. 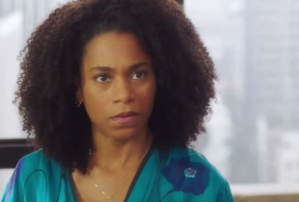 ‘YOU’RE TALKING TO OTHER WOMEN?!?’ | While Jackson was showering, Maggie checked a text… which turned out to be on Jackson’s phone, not hers, and was a “Miss you” with “multiple heart emojis!” Altogether understandably, she hit the roof. At first, Jackson tried to turn it around on Maggie — asking why she’d been looking at his phone, which she’d mistaken for her own. But ultimately, he admitted that he had connected with a woman named Kate at the monastery. “So you slept with her because you had God feelings!” Maggie spat. He hadn’t slept with her, he insisted. They hadn’t even kissed. They’d just talked about how she’d lost her brother and was looking for peace. “Which she found in your pants!” Maggie cracked. Unbelievably, it got worse. Apparently, Jackson hadn’t just been talking to Kate, he’s also been talking to April “sometimes.” (Honestly, what’s the point of him talking to April if it’s going to be off screen? What a tease.) 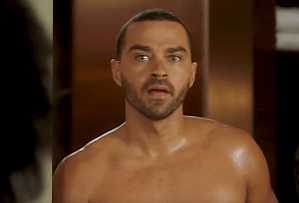 In disbelief, Maggie admitted that she’d figured she’d be the reason that she and Jackson would end. Eventually, he said that he talked to these other women because his girlfriend wouldn’t talk to him — really talk to him — about her feelings. “You run every time it gets complicated,” he argued. “You hide.” Why? Later, she said that when he’d gone on his “God quest,” a part of her had been relieved, because she’d figured he’d come back as himself. But instead, he’d come back with more questions — which he’d taken to other women. What’s more, because of the way she grew up, always being five steps ahead of everyone else, she wasn’t exactly Ms. Popular. So “I never learned how to really love, or fight, or really let somebody in, without it feeling like the end of the world.” She was willing to try, though, starting with having an open conversation with him about God. “I am grieving,” he confessed, “what [April and I] both lost to bad timing,” since they hadn’t believed simultaneously. Still, he really loved Maggie, he swore. Sadly, it was all too much for Maggie. She left in tears, knowing how hard hit he was over what he’d lost with April.

‘SHE’S MY FRIEND’ | In the episode’s final moments, as Catherine cut the ribbon on her medical center, Koracick admitted to Mer that Richard’s wife had awakened him after he began sleepwalking following his son’s death. And now he was scared because this person who was so important to him had chondro cancer, and “I have no idea how remove it without paralyzing her or killing her.” Overhearing, Catherine argued that she was the can-do type, dammit, and she could beat it — but she couldn’t do it alone. She needed her brilliant friend. She later tried to call Richard but didn’t manage to reach him. Finally, Maggie went back to Mer’s and texted… her sister to say that she and Jackson might be over. Just then, Mer received a call from Richard. “Don’t tell Catherine,” he said. But he’d been arrested.

So, what did you think of “Anybody Have a Map?” That April tease? Did you see anything between Mer and Koracick? Just me? And is it a moot point, anyway, because of those scenes from next week?