Between Richard’s bombshell about Meredith’s father, Teddy’s sitdown with babydaddy Owen, and Jo’s worry that she’d done something unforgivable, the promos for Thursday’s Grey’s Anatomy certainly promised an episode fraught with tension. But was Thatcher’s condition critical? Did Teddy actually reveal that she was having Owen’s baby? And what on earth could Jo have done that was so bad? Read on, and all will be answered. 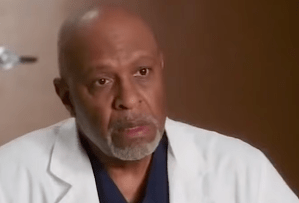 ‘WOMEN USUALLY JUST FEED ME THE GRAPES’ | As “Flowers Grow Out of My Grave” began, Teddy showed up at Owen’s to have The Talk. But when he asked what was going on, she… choked and, rather than admit that they were expecting, apologized for their fight in Germany. Before their conversation could go any further, Amelia came in, panicked that Betty had gone MIA from school. Quicker than you could say “stat,” a doc-hunt was underway for the teen — even Teddy was going to pitch in to look for her. Meanwhile, at Grey Sloan, Jo urged Link to pursue Meredith, and when Levi expressed to Nico his nervousness at being on the ortho god’s service since he’d never done ortho, the gay doc sexily said that he’d show Glasses how it was done. Shortly, Jo’s first solo transplant, Roberta, discovered that she’d been right to expect her new liver to be diverted — as it was indeed diverted. But it was liver-die, people! (Couldn’t resist!) And after Meredith, Alex and DeLuca teamed up on the case of Flora, a little girl whose family was celebrating the Day of the Dead in her hospital room, Richard revealed to Grey that her father had acute myeloid leukemia and had only a few weeks to live.

Later, Mer confided in Maggie that Thatcher was dying — but she didn’t want to talk about it. Except that she sorta did. “He doesn’t even know you exist,” Grey told her half sister. “That’s how much of a not-father he is to me.” When Jackson came in, Mer asked how he’d react to learning that his deadbeat dad was dying. “Would you want to say goodbye?” He unhelpfully didn’t know the answer (but spent the rest of the episode trying to make sure that, after his disappearing act, Maggie felt appreciated). In a bit — Jo’s encouragement ringing in his ears — Link again tried to ask out Mer, who turned him down, saying that she already had a matchmaker on the case, and Cece had a list of potential suitors all lined up. “How do I get on that list?” asked Link. (And you have to give him some credit for not throwing in the surgical cap.) Unfortunately for him, he was “not the kind of guy on the list,” Grey told him. He was more the “in-case-of-emergency guy.” When at last Link gave up, noting that Jo would be heartbroken that she’d turned him down, Mer asked what his and Brooke’s story was. “Does Alex have anything to worry about?” In response, he asked what the story was between Mer and Alex. “Does Jo have anything to worry about?” Touché! 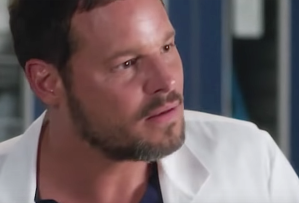 ‘I DON’T KNOW IF ALEX WILL FORGIVE ME FOR THIS’ | Soon, Bailey discovered that only a few minutes earlier, a patient had passed away who just happened to be a perfect donor match for Roberta. (Doctors know wild medical trivia!) So Miranda tried to restart his heart to save his liver for Roberta. “Zombie medicine,” Jo called it. But she and Casey were still on board to help. While reperfusing the organ, Bailey developed a wonderfully Dr. Frankensteinian quality. This was the kind of stress that she loved, not the kind that she got from waiting every day to find out if Ben had survived another shift as a firefighter. Despite this promising turn of events, Roberta remained skeptical about “a magical stardust liver miracle” — again, with good reason. When Jo revealed to Alex what she and Bailey had done, he worried about the fact that UNOS hadn’t approved the transplant. For fear of damaging the hospital’s relationship with UNOS, he even went so far as to tell Bailey and Jo no way was that liver going into a patient, whether they’d promised it to her or not. Luckily, Bailey ignored Alex and kept the liver going long enough that UNOS approved the directed transplant. Jo feared Alex would never forgive her — Alex? Alex Karev? As if! — but Bailey insisted that she’d never forgive herself if she let Roberta die. In the end, the transplant was a success, but Jo could tell by the look on Alex’s face as he stepped into the O.R. gallery that she was in big trouble. 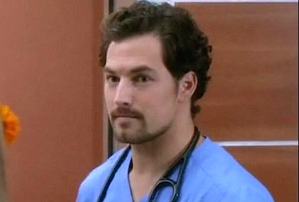 ‘IS THAT YOUR GUY OUT THERE?’ | When a twitterpated Flora expressed reluctance to be operated on by DeLuca, he sweetly volunteered to sit out her surgery — even though, as he told Grey, he’d been really looking forward to working with her. And the chemistry between Mer and DeLuca in this scene… hello! When was the last time we saw Grey look at somebody like that?!? Hell, when was the last time somebody looked at Mer with appropriately besotted puppydog eyes like DeLuca’s? Anyway, while successfully operating on Flora, Mer shot down Alex’s notion that she might want to go visit her dad. “I don’t really need to grieve him,” she insisted, “because he’s been a ghost for years.” That night, Mer spent her date going on and on about how she was done feeling bad about not feeling bad about her father. 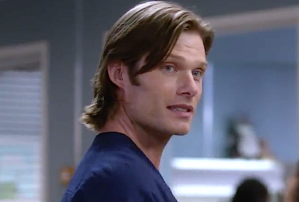 ‘I’M OPEN TO MEETING SOMEONE’ | After Levi diagnosed that Link’s young ortho patient had a humerus fracture, Nico asked Glasses out. Levi turned him down, prompting Nico to ask if had a boyfriend. Did it seem like he did? Levi asked. Well, he seemed nervous, said Nico, who being a fellow didn’t have time for a boyfriend… though he was open to it, he added. (And I already like these two way more than Mer/Link.) When the patient’s mom learned that he needed a biopsy to determine whether his simple, routine fracture was actually cancer, she broke down in tears. But of course it was actually good that they’d discovered the possibility so early. And though it turned out that the boy did have a tumor, Link reassured his mom by revealing that, when he was a kid, he’d had the same kind of tumor, and hey, look how he’d turned out! So it would help the patient, he suggested, if she could be brave for him. Afterwards, Link cheered up the kid, who worried about losing his hair, by starting to chop off his own magnificent mane right then and there!

‘BETTY IS NOT FINE, BECAUSE SHE IS NOT A NORMAL TEENAGER!’ | When the search for Betty yielded no results, Amelia became so upset that she needed a meeting. While Owen took her and then went to pick up Leo, Teddy stayed behind in case Betty showed up… and practiced finally blurting out, “Oh, and I’m having your baby.” When Owen returned home with the baby, he started talking lovingly about his makeshift family, and Teddy said… “Are you happy?” Before he could answer, Leo got fussy and Teddy left without revealing her secret. As the hour drew to a close, Mer was considering calling her dad when Link strolled up and put his number in her phone “in case of emergency.” Just then, DeLuca walked up, giving us a chance to contemplate two of Grey’s potential suitors. (Team DeLuca all the way!) In the elevator, Nico planted a kiss on Levi that steamed up his glasses. Nico then apologized. “That was abrupt,” he realized. “That was perfect,” Levi replied. But when Nico learned that Levi had never kissed a guy before, he bailed. “I thought this was a teaching hospital!” Glasses exclaimed. Though Alex argued with Jo in public, in private, they were right back to canoodling. When Bailey saw how high her blood pressure was, she texted Ben that they needed to talk on his next day off. (Ruh-roh.) While the Day of the Dead left Maggie thinking of her mom and Richard visiting Olive’s grave, it left Mer walking out of the hospital surrounded by the spirits of those she’d loved and lost — from Lexie and Derek to Ellis and Doc. Off her rough day, Mer went to Alex and Jo’s and helped salvage Link’s hairdo.

So, what did you think of “Flowers Grow Out of My Grave”? That look between Mer and DeLuca? That Nico/Levi kiss? Hit the comments.