Despite all of the secrets, lies and mysteries on How to Get Away With Murder — and there are plenty of those — one thing is always certain: Sam Keating and technology should never, ever mix.

Just when you thought Sam’s most egregious error would be the now-iconic “Why is your penis on a dead girl’s phone?” fiasco from Season 1 — which sincerely feels like it happened a century ago, in Murder time — Thursday’s midseason premiere revealed another of Sam’s technology faux pas, this time in the form of a game-changing email.

But the episode didn’t only focus on Annalise’s ex-husband, who still manages to wreak havoc from beyond the grave; it also dropped new hints about why Gabriel is in Philadelphia, reintroduced a character we haven’t seen in years and answered several of our burning questions.

Read on for the details of “He Betrayed Us Both”:

PAPA, CAN YOU HEAR ME? | The episode picks up in the immediate aftermath of November’s fall finale, with Annalise understandably wary of Gabriel’s presence in her apartment. But Gabriel assures his professor that he doesn’t want to hurt her; he just wants answers. And that’s enough for Annalise to invite him into the kitchen, where she pours a little vodka and grills Gabriel on who he really is. According to Gabriel, he was always told by his mother (who is still alive, and doesn’t know he’s in Philly right now) that his dad bailed before Gabriel was even born. He never had reason to question that story until a few months ago, when he found his birth certificate while cleaning out his late grandmother’s apartment. Once Gabriel found that document, he decided to come to Middleton in search of answers — though he insists that his drive to be a lawyer is very real.

Gabriel is especially curious about how his father died, and Annalise confirms that it was Wes who killed him; she even plays Gabriel the voicemail that Wes left her in Season 3, where he confessed to murdering Sam. But Gabriel still has questions: Why is Frank looking into him, if Annalise didn’t tell him to do so? And why does Annalise believe that Sam was a bad guy? Annalise, of course, has her fair share of unsavory Sam anecdotes, and she urges Gabriel to understand that his father was a liar and a scoundrel and a heartbreaker. “It’s better to have no father than a bad one,” she tells him.

Later that night, Gabriel sits alone in his bedroom, tearfully processing his conversation with Annalise. He picks up his flip phone and calls someone whose identity we don’t learn. “Hey. I screwed up,” he says. “They found out who I am. Can you call me back?” (Another mysterious phone call recipient? I don’t think my heart can take the secrecy.) 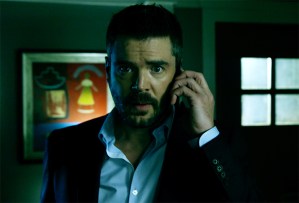 THROWBACK THURSDAY | Throughout Gabriel’s late-night chat with Annalise, we’re treated to flashbacks from the days immediately following Annalise’s horrific car accident and subsequent stillbirth. (Somehow, Frank’s flashback wig seems to get worse every time.) After getting released from the hospital, Annalise tells Sam that she wants to adopt: There’s a 12-year-old boy named Christophe (who we know as Wes, of course!) who recently lost his mother, and it seems like he’d be a perfect addition to their devastated little family. But Sam isn’t sold on the idea, insisting that he and Annalise need to grieve their own child properly — and when he later discovers that Annalise filed the adoption paperwork anyway, he threatens to leave her. “I’m going through with it, with or without you,” Annalise warns, to which Sam replies, “OK. But it’s without me.”

Sam then leaves Annalise on her own for a few days and tries to pay a visit to his ex-wife, Vivian Maddox. Earlier in the episode, when Annalise had first gotten home from the hospital, Sam had looked up Vivian’s contact information online and left her a voicemail, tearfully begging her to let him meet his son, Gabriel. But when Vivian fails to return his call, he goes to her apartment instead and is greeted by Vivian’s mother, Gwen, who is none too pleased to see Sam at the door. She implores Sam to stay away from both Vivian and Gabriel “if you have an ounce of love or respect or basic human decency left” — but when Gwen slams the door in Sam’s face, he turns to see Gabriel walking up the hallway, bouncing a basketball. Sam seems overwhelmed when he realizes this is his son, and they exchange a few pleasant words… until Vivian’s mother comes back out into the hall and sees them interacting, prompting her to quickly pull Gabriel inside the apartment.

Back at Annalise’s house, Bonnie arrives to find that Annalise has attempted suicide, after learning from the Department of Child Services that Christophe’s adoption was not going to work out. Bonnie helps Annalise regain consciousness and purge the painkillers on which she’d tried to overdose, then successfully gets her to the hospital and back. Once Annalise returns home from the ER, she finally reveals to Bonnie just how heartbroken she is over her son’s death, weeping that her child was taken away from her after years of struggling to get pregnant.

At the end of the hour, these flashbacks finally merge with present-day events by way of an email that Sam had written to Vivian. After being shooed away from Vivian’s apartment all those years ago, Sam had penned a message to his ex-wife, revealing that he’d inadvertently met Gabriel and that he’d really like to be in both Vivian and Gabriel’s lives somehow. “I never stopped loving you,” Sam had written to Vivian. (Ugh, this guy!)

In the final minutes of the episode, two more people get their hands on this email. In the flashbacks, it’s Frank, who receives a knock at his door one morning and opens it to find Eve Rothlow (returning guest star Famke Janssen), Annalise’s onetime lover. “I’m a friend of Annalise’s,” Eve tells Frank, holding out a printed copy of Sam’s email to Vivian. “You’re going to help me with this.” Frank then brings the email directly to Sam and urges him to delete it from his outbox, reminding Sam that his grieving wife needs his support now more than ever. Sam hears the message, loud and clear, and ultimately returns to Annalise so they can work through their marital issues. (And, for the record, we’ve finally learned the identity of “The One” in Frank’s contacts: It’s been Eve all along.)

Meanwhile, in the present day, Annalise is the one who receives Sam’s email to Vivian. Shortly after Gabriel leaves her apartment, Annalise is awoken by a knock on her door, and she, too, opens it to find Eve standing there. After presenting the email to a stunned Annalise, Eve remarks, “He never deserved you.” 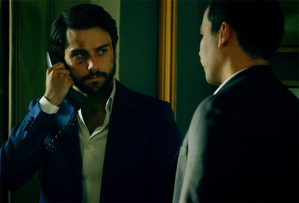 * Bonnie informs Frank that she killed Miller at the wedding, and she spends much of the episode overcome with guilt. “I need to believe he was awful,” Bonnie says, after Frank tries to convince Bonnie that Miller wasn’t playing her. Later, Frank picks up Nate from wherever he dropped off Miller’s body, and Nate can immediately see that Bonnie is torn up over what happened at the wedding. He tries to comfort her by assuring her that Miller’s death was his responsibility, not hers. “He was gonna die either way,” Nate tells an emotional Bonnie. “You just saved him some pain.”

* Laurel reveals Gabriel’s identity to the rest of the Keating Four (which, given Oliver’s presence in the group, should really be the Keating Five again, no?). Connor, Michaela and the rest of the gang are aghast to learn that Gabriel is Sam’s son, and that Laurel kept this a secret for weeks. They begin to suspect that perhaps Bonnie or Frank killed Gabriel at the wedding reception — after all, Bonnie did have blood on her leg, and Laurel later finds more of it on Christopher’s blanket — but Frank attempts to assure them that Gabriel is safe and sound.

Later, the Keating Five grows concerned that Gabriel will somehow get the investigation into Sam’s death reopened, even though Wes initially took the fall for it. Asher giddily informs the group that Bonnie is dating Miller, and there’s no way Bonnie would let him reopen that case — but little do they know, Nate pummeled Miller out of the picture a few short hours ago.

OK, your turn. What did you think of Murder‘s midseason premiere? Grade the episode in our poll below, then drop a comment with your full reviews.