The following recap contains spoilers for How to Get Away With Murder‘s Season 5 fall finale. (Need to catch up? Read our previous recap here.)

How to Get Away With Murder‘s Connor Walsh and Oliver Hampton have waited a long time to get hitched; they’ve dealt with meddlesome parents, faced an HIV diagnosis head-on and lovingly forgiven each other’s many, many criminal acts.

But in Thursday’s fall finale, the long-awaited “Coliver” wedding — sweet and romantic though it may have been — was ultimately eclipsed by a devastating death and a life-changing revelation. (As if you expected anything less from a show with “murder” in its title.)

Although the midseason finale left several storylines unresolved (like, say, Annalise’s mysterious adoption), it did answer two major questions that have been teased for months: Who was killed at Connor and Oliver’s wedding reception? And, seriously, who the heck is Gabriel Maddox?

Let’s break down the answers revealed in Thursday’s episode:

WHO DIED AT THE WEDDING? | The poor, unfortunate soul who dies in the snow: A.D.A. Ronald Miller (because Bonnie just can’t catch a freakin’ break). Miller’s untimely demise comes at the hands of both Nate and Bonnie, who have reason to believe that Miller was responsible for Nate Sr.’s death, despite Miller’s protests to the contrary.

Early in the episode, Nate asks Bonnie to get a piece of intel from Miller, which could help Nate get to the bottom of his dad’s death. (Nate would ask Miller for the info himself, but he has resigned from his job at the D.A.’s office, a development that takes Bonnie by surprise.) Bonnie mentions the favor to Miller just as they’re about to leave for Connor and Oliver’s wedding — and it doesn’t go very well. Miller launches into an attack on Annalise, explaining that he thinks she’s a bad person and that she’s taking advantage of Bonnie’s “issues” in order to get Bonnie to do her dirty work against the governor. (“My issues?” Bonnie fires back, clearly unhappy with Miller’s choice of words.)

Bonnie ultimately decides to go to the wedding sans Miller; though Miller says he loves Bonnie, and he wants Bonnie to take care of herself for the first time in her life, Bonnie isn’t pleased that he’s bad-mouthing Annalise, and she flies solo to the ceremony. Meanwhile, Michaela does some digging and finds that the prison warden had received a call from an unlisted number on the day that Nate Sr. died, which could have been the very call that ordered Nate Sr.’s death in the first place. Nate brings the intel to another contact of his, who traces the unlisted number to a payphone somewhere in Philly — and she also sends Nate a photo from a nearby security camera, which clearly shows Miller making that call at the payphone in question. 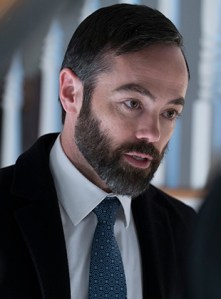 Nate receives all of this damning information while he’s at the wedding reception, and he isn’t the only one there who believes that Miller might be responsible for Nate Sr.’s death. When Miller shows up at the reception in an effort to make amends with Bonnie (and potentially propose to her), Bonnie herself accuses Miller of coordinating Nate Sr.’s demise. At this point, she doesn’t know anything about the payphone call to the warden, but she does piece together the fact that Miller has multiple contacts at the governor’s office and at the hospital where Nate Sr. was supposed to be transferred; the way Bonnie sees it, Gov. Birkhead likely promised Miller that she’d make him district attorney if he had Nate Sr. killed.

Miller tries desperately to tell Bonnie that she’s wrong, but Bonnie wants nothing to do with him anymore, and she goes back to the reception. Shortly thereafter, Nate spots Miller standing outside the venue, and he makes his own accusations about Miller’s involvement in his dad’s death. But Nate is a whole lot angrier than Bonnie was, and he only gets more infuriated as he accuses Miller of robbing a “defenseless old man” of the last years of his life. Despite Miller’s pleas for Nate to hear him out, Nate punches Miller, who falls onto the snowy ground. Nate punches him again, and again, and again, and again, promising to make Miller feel the same pain that his father felt, until Miller is practically dead.

Once Bonnie is back at the reception, Asher alerts her that Miller and Nate are talking outside, and she rushes back out to see what’s going on — and she’s the one holding Laurel’s son, Christopher, having grabbed the babysitter baton from Oliver’s mother. As she leaves the venue, she spots a trail of blood that leads her right to Miller’s body, as well as a distraught Nate who shows her the photo of Miller making that payphone call. (She decides to keep Nate’s phone after looking at the photo, which is why we’ve previously seen the device ringing in her dress pocket.) “He hurt my Pops,” Nate mumbles over and over — and Bonnie, knowing she needs to finish the job, walks over to Miller and suffocates him, sobbing as she does it.

At that point, we’ve caught up with the season’s previous flash-forwards: Bonnie instructs Nate to clean up the mess, which he does (and finds the engagement ring that Miller was holding in his pocket); Michaela becomes suspicious of the blood on Bonnie’s leg; and, for a little bit of levity, Asher is hooking up with Connor’s mom, just ’cause!

WHO IS GABRIEL MADDOX? | The leading theories in this season’s Gabriel Maddox mystery were that Gabriel is potentially Bonnie’s son, or perhaps he’s Annalise’s son from a previous relationship (or earlier in her marriage to Sam Keating).

In the end, though, it turns out that Gabriel is Sam Keating’s son, from Sam’s first marriage — a marriage that Annalise broke up by being the other woman.

Let’s back up: On the morning of Connor and Oliver’s wedding, Annalise texts Connor to tell him she’s sick and won’t be attending the festivities. But when Connor pays a visit to her apartment, Annalise looks remarkably healthy; it isn’t that she can’t go to the wedding, it’s that she doesn’t want to go. “I’m no good at weddings,” Annalise shares, revealing to Connor that she didn’t even have her own wedding. After all, she was Sam’s mistress back when he was married to his first wife, so Annalise and Sam’s eventual nuptials were not something they wanted to display publicly. For that reason, Annalise isn’t a fan of any wedding, and she doesn’t want to attend Connor’s — until Connor reminds her that she’s the reason he even met Oliver in the first place, thanks to her insanely demanding first-year law class.

Annalise goes to the wedding, after all, but Connor and Oliver’s sentimental vows seem to trigger her, and she bails halfway through the ceremony to hide in a bathroom stall and drink from the flask she brought in her purse. Later that night, while the other guests are at the reception, Annalise sneaks back to the church where the ceremony was held and proceeds to get even drunker in one of the pews, all by herself — until Gabriel finds her there and instantly knows she’s been drinking. “My mom waited way too long to get help,” Gabriel tells Annalise, assuring her that he’ll provide whatever support she needs to get sober again. 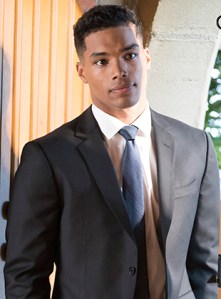 While Gabriel is at the wedding, Frank breaks in to his apartment and searches once more through the duffel bag that Gabriel keeps stashed in his fireplace. Frank discovers a small key in the bag, which corresponds to a locked box stowed away on a random shelf in Gabriel’s place — and when Frank opens the box, he finds a series of documents, one of which seems to stun Frank as soon as he reads the information on it.

That’s when Frank heads over to the wedding reception, and Annalise asks, “Why do you look like someone just died?” Frank gravely informs her that “Gabriel is Sam’s kid,” and he presents her with Gabriel’s birth certificate. Father? Sam Keating. Mother? Vivian Maddox. Annalise looks understandably sick to her stomach, and she bails on the reception immediately. (Thankfully, she doesn’t stop to check on her date, Nate, who’s busy pummeling Miller until he practically dies.)

As we’ve already seen in previous episodes, Annalise immediately collapses upon getting home and breaks down in tears on her living-room floor. But then she hears a door creak open somewhere in her apartment, and Gabriel walks out to meet Annalise, lying that he came over to check on her after she left her keys at the church. (The real scenario? Gabriel swiped Annalise’s keys after she drunkenly dropped her purse at the wedding and spilled its contents everywhere.)

“I know who you are,” Annalise tells Gabriel — and as Gabriel waits expectantly for her to say more, his face morphs into that of Sam Keating, who smirks right into the camera.

* Even though we know who Gabriel is, we still don’t know who Frank has been talking to on the phone about him — y’know, the contact labeled “The One.” Also, when Frank first saw Gabriel on Middleton’s campus, he said, “Her kid’s here,” which must be referencing Vivian Maddox. But how does Frank know Vivian? Is that even who he’s talking about?

* Was I the only one who thought Annalise would kiss Gabriel during that scene in the church?

* Raise your hand if you were flabbergasted by Oliver’s lovely performance of “All of Me” at the wedding reception. (You can’t see me, but I am frantically waving a hand in the air as we speak.)

* Do you think Miller was really involved in Nate Sr.’s death? I’m looking forward to watching this storyline play out in 2019, but I have a sinking feeling that Miller may have had nothing to do with it.

OK, your turn. Grade the fall finale in our poll below, then hit the comments with your thoughts on the episode!