The fall finale of How to Get Away With Murder is fast approaching, which means we’re only seven days away from getting some long-awaited Season 5 answers.

But don’t let the ABC drama fool you into thinking you’ll get closure so easily. In Thursday’s episode, the series introduced even more questions — and not just about Gabriel Maddox, or the deadly wedding that will unfold in a week. No, this episode pulled at yet another intriguing thread: the curious connection between Annalise Keating and an adoption.

Let’s recap what went down in Episode 7:

‘SHE KNOWS ABOUT THE ADOPTION’ | The investigation into Nate Sr.’s death is officially closed, and it’s considered a justifiable homicide carried out by Paula Gladden, one of the correctional officers who was tasked with transferring Nate Sr. from prison to the hospital. According to the medical examiner, Nate Sr. stabbed Gladden with a pencil when she tried to take the letter he’d written to his victim’s family. Then, when Nate Sr. allegedly reached for Gladden’s gun, she shot him once in the head, causing him to die instantly. Conveniently, there were no other witnesses to the incident, and very conveniently, the prison’s security cameras were “malfunctioning” that night — which, in Annalise’s opinion, means that the prison is covering up a murder that was ordered by Gov. Birkhead. 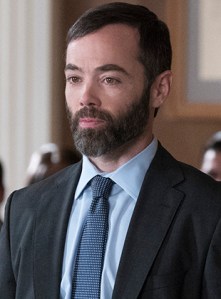 Annalise works with D.A. Miller to get an inquest, which means they’ll have an opportunity to tell a new jury their side of the story and, ideally, get the jurors to see that Nate Sr.’s death was a result of criminal negligence. But not even a grand-slam testimony from Annalise can change the jurors’ minds; their verdict ultimately states that no such negligence took place at the prison, and Nate Sr.’s death was indeed a justifiable homicide.

But that’s not the only tally mark going in Annalise’s “L” column this week. She also takes a meeting with Gov. Birkhead, who informs Annalise that she’s putting the kibosh on the Pennsylvania Fair Defense Project, given all the negative press surrounding Nate Sr.’s death. Annalise goes off on the governor after getting the news, even revealing her theory that Birkhead is the one responsible for Nate Sr.’s murder. But Birkhead has something up her sleeve that even Annalise doesn’t see coming: Just as Annalise is about to leave the governor’s office, Birkhead reveals that she has “the adoption paperwork,” and she isn’t afraid to use it to destroy Annalise’s reputation once again.

We’re not given any more clues as to what the adoption paperwork entails, or how Annalise is connected to it. But when Bonnie pays Annalise a visit that night, she discovers that Annalise has started drinking again, and Annalise reveals that it’s because Birkhead “knows about the adoption.”

Fortunately, there is the thinnest of silver linings for Annalise, and it comes in the form of Tegan Price. Though Tegan is initially skeptical of Annalise’s theory that the governor had Nate Sr. killed, she eventually decides to help Annalise get her job at Caplan & Gold back. With the help of her IT guy, Tegan unearths the real story of Emmett Crawford’s misconduct in London — we don’t learn what it is, but it’s apparently much worse than Emmett let on — and Annalise takes the information to Emmett with an offer that’s part-blackmail, part-olive branch. She assures Emmett that, if he hires her back at Caplan & Gold, she can fix the misconduct situation for him and make it go away. Emmett doesn’t give Annalise an answer before the episode ends, but he sure looks tempted to take her up on that promise.

* Now that she knows who Gabriel really is, Laurel becomes increasingly wary of her classmate — and she’s less than thrilled to see Michaela getting closer to Gabriel as Nate Sr.’s case continues. Laurel urges Frank to tell Annalise who Gabriel is, but after learning that Annalise has fallen off the wagon, Frank knows it isn’t the right time to break such major news to her. (“Gabriel is Annalise’s worst nightmare,” Frank gravely reveals.) Laurel ultimately threatens to tell Annalise the truth herself… and just as she and Frank are discussing the situation, Bonnie walks into the room (though she isn’t given any details about Gabriel or his place in Annalise’s world). 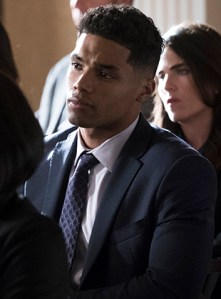 * Speaking of Bonnie, she’s the focus of this week’s flash-forward to Connor and Oliver’s wedding. After killing her anonymous victim in the snow (who we learn is a man), Bonnie walks over to a second person and gives them these instructions: “Listen to me, real close. Take his car, and him, and drive away. We can figure out the rest later. Just do whatever you need to get yourself together — I know you can. I’ll take care of everything. Just trust me.”

It isn’t revealed who Bonnie is speaking to, but we do catch a tiiiiny, tiny glimpse of her victim: The person in the snow seems to be wearing a dark suit jacket over a white dress shirt. Since this is a wedding, that doesn’t exactly whittle it down — but in the teaser for next week’s fall finale, Oliver is not wearing a jacket, at least not at the wedding ceremony. So, perhaps there’s hope that #Coliver will make it out of the finale unscathed, despite Oliver’s notable absence from all of the flash-forward scenes thus far.

* Oliver, who has grown tired of the black cloud that’s perpetually hanging over his friends’ heads, suggests that they all go out for drinks and have one last wild night before the wedding. But this is How to Get Away With Murder, which means that all fun occasions must end in some form of regret or disaster.

Case in point: Connor gets into a fistfight with some jerk who uses a gay slur when he sees Connor and Oliver kissing. (Ah, so that’s how he got those wedding-day cuts on his face.) And Michaela, who spends part of her evening putting a very drunk Asher to bed, ends up walking across the hall and knocking on Gabriel’s door, which leads to some heavy flirting and an eventual hookup between the two. Fare thee well, fabstinence.

With that, I hand it over to you. What did you think of Thursday’s Murder episode? Final theories as we head into the midseason finale? Drop everything in a comment below.