Sisters, sisters, there were never such devoted sisters.

Well, those words may have applied to a couple of White Christmas characters — but for How to Get Away With Murder‘s Bonnie and her sister, Julie? They couldn’t be further from the truth.

On Thursday’s episode of the ABC drama, Bonnie paid her estranged sibling a visit, hoping to get answers about the son that was taken from her years ago. But, as with any piece of information delivered on this show, the truth was almost unbearable for Bonnie to hear. Meanwhile, Annalise was double-crossed with deadly results, and the Gabriel Maddox mystery became even more intriguing.

Let’s recap what went down in the hour:

SISTER ACT | Bonnie arrives at Julie’s house to discover that Julie has a young daughter, and the little girl’s presence will require Bonnie to stay in town for a few extra days, in order to carve out some privacy to chat with her sister. When the two women finally get some time alone, Bonnie shows Julie the grainy photo from the hospital’s security camera, which shows Julie walking out of the building with Bonnie’s son in her arms. Julie tearfully explains that their father concocted the whole plan, even convincing one of the hospital’s nurses that Julie was the boy’s mother in order for her to steal him. She tells Bonnie that their father ultimately sold the boy, but she doesn’t know where he ended up or who bought him.

But Julie’s tearful confession isn’t exactly an accurate story. Later in the episode, Julie gives an emotional monologue to her Narcotics Anonymous support group, cryptically explaining that even though Bonnie seems to want the truth about her son, Julie can’t give that to her. “If she knew the truth, it would kill her,” Julie sobs to the group — and Frank, who is sitting in the back of the meeting, covertly records the entire speech on his phone.

The next day, Frank decides to play the recording for Bonnie, and he supplements it with another little nugget of soul-crushing intel: About a year after Julie stole Bonnie’s son from the hospital, she was arrested for trespassing on someone else’s property. Frank did some digging, and he found that the family who owns that property has a son named Jake — a blonde boy who is about the same age as Bonnie’s son would be by now. Frank theorizes that this is the very family to whom Bonnie’s father sold the boy, and Julie likely trespassed on the property in an effort to abduct the boy for a second time.

Bonnie then takes this new information to Julie, who finally breaks down and tells Bonnie (what we can currently assume is) the truth about her son. On the way home from the hospital that night, Bonnie and Julie’s father had revealed that he planned to keep Bonnie’s son with him at his house. Knowing that the boy would likely be sexually abused in the same way that Bonnie and Julie were, Julie decided to make a break for it. When her father’s car came to a stoplight, Julie bolted from the vehicle with the baby in her arms, and she didn’t stop running until she reached the house at which she was later caught trespassing. Julie solemnly tells Bonnie that there was a wooded area on the property, and in order to protect the baby like she’d always promised Bonnie she would, Julie buried the infant in the woods. (Yeah, you can definitely expect to see Bonnie Winterbottom in our annual “Which TV Character Had the Worst Year?” photo gallery. Murder writers, what did Liza Weil ever do to you?!) 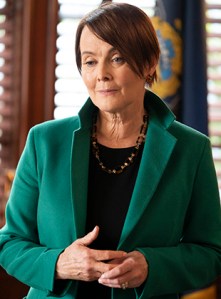 GOTTA HAVE MY POPS | The episode’s second major plotline involves Annalise, who takes a meeting with longtime foe Gov. Birkhead. The governor makes Annalise an intriguing offer called the Pennsylvania Fair Defense Project, which would allow Annalise to do all kinds of things with her class-action lawsuit that she’s thus far only dreamed of, like allocating funds for public defenders and drafting a bill to cut the prison population in half. Gov. Birkhead even sweetens the pot by telling Annalise that she can get her out of that contract with Caplan & Gold, and that Annalise’s clinic students would come to work for the Fair Defense Project.

It all seems too good to be true, of course, and Emmett Crawford points out an important loophole in the governor’s offer: Annalise wouldn’t receive a fixed budget for her class-action cases, but would instead only get funding that is contingent on meeting certain quarterly quotas. (There’s a lot of legal jargon here that I will gladly eliminate.) At the request of Tegan Price, Emmett essentially begs Annalise to stay with Caplan & Gold, assuring her that he’ll have her back at every step of her class-action lawsuit; he even reveals the details of his misconduct scandal, which involved him falling in love with a client who didn’t feel the same way.

Annalise ultimately decides to accept Gov. Birkhead’s offer, for one major reason: The governor has pulled a few strings and gotten Nate Lahey Sr. pardoned by the state, meaning he can live with Nate Jr. instead of getting placed in a psychiatric facility. Emmett, somewhat understandably, gives Annalise the cold shoulder the moment she decides to accept Gov. Birkhead’s offer — and the decision to work with Birkhead ends up backfiring for Annalise in a major and devastating way. Though we don’t actually see the events unfold, Nate Sr. mysteriously dies just as he’s about to get transferred to an interim mental facility. We catch a glimpse of Nate Sr. before his body is covered with a sheet, and it seems he was shot in the head on his way out of prison — but the identity of the killer remains a mystery for now.

* Remember last week, when Laurel asked Frank to spill the deets on who Gabriel Maddox really is? Well, it seems he revealed at least part of the story to Laurel that day, and Laurel spends all of this week’s episode trying to keep her distance from Gabriel. Laurel tells Frank that she would “do anything not to know” who Gabriel really is — and Gabriel, picking up on Laurel’s chilly vibes, assures her that he doesn’t have romantic feelings for her, assuming that’s the reason she’s been acting so standoffish. He also reveals that he knows what happened to Wes last year, which only serves to freak Laurel out even more.

* Connor and Oliver are both joined by their mothers while they scope out potential wedding venues, and there’s quite a bit of tension hanging in the air. Oliver’s mom, Joanna, is particularly icy, hinting on more than one occasion that she’d prefer for her son to get married in a church. Connor finally convinces Oliver to reveal his HIV-positive diagnosis to his mother; after all, it’s the diagnosis that has been causing Oliver to pull away from his mom, and not Connor’s bossy ways.

“I’m here for you until the day I die,” Joanna tearfully says upon learning Oliver’s HIV status, adding that it breaks her heart to know that Oliver has been going through his health issues alone. “I wasn’t alone. I had Connor,” Oliver sobs, and Joanna jokes, “Then he should have told me.” They laugh and hug and thank God there was finally some levity in this episode.

* In the flash-forward to Connor and Oliver’s wedding, Ronald Miller sits outside the wedding venue in his car, staring at an engagement ring that he presumably plans to offer Bonnie. He sends her a text that reads, “I’m outside. Can we talk?”, and Bonnie looks understandably wary about chatting with her beau at the moment. After all, she did just murder someone, like, five minutes ago.

OK, your turn. Your thoughts on Thursday’s episode of Murder? Drop ’em in a comment below.