Warning: The following contains spoilers for Thursday’s season finale of How to Get Away With Murder.

An early frontrunner has emerged in the race for this year’s Unluckiest TV Character: How to Get Away With Murder‘s poor, poor Laurel Castillo.

Her onetime beau, Frank, went MIA for weeks — and when she tried to get information on his whereabouts, she was forced to sign her life away to her father. She barely survived a house fire that killed her next boyfriend, Wes, and she’s unexpectedly pregnant with his child.

And, although she doesn’t know it yet, Laurel can add one more thing to her long list of adversity: Her own father was responsible for Wes’ death. Granted, it wasn’t Mr. Castillo who physically killed Laurel’s boyfriend. But he did mastermind the explosion at Annalise’s house, and seemingly recruited a family friend, Dominic, to off Wes before the place went up in flames. (Connor, on the other hand, really was just trying to save Wes that night, after he found him unconscious in the basement — a result of Dominic drugging Wes, gagging him and suffocating him before cutting the house’s gas line.)

Until she finds out who’s actually behind Wes’ demise, though, Laurel is left to zero in on another likely suspect during Thursday’s season finale: Charles Mahoney. When Skeezy McSlimeball gets released from jail, Laurel enlists Michaela and Asher to help her confront the man about Wes’ death. But as she rushes down a crowded New York City street toward the Mahoney son, with a gun stashed in her purse (?!), Laurel is interrupted by none other than Dominic — don’t hug him, Laurel! He murdered your man! — while Charles Mahoney drives off in a taxi.

Laurel also comes to find, during a very public and vulnerable moment on the witness stand, that the contract she signed for her father all those weeks ago was not what she initially thought. Rather, it was an affidavit, stating that Laurel committed perjury as a teenager when she claimed she was kidnapped. D.A. Denver blindsides Laurel with this information during a hearing for Annalise’s case, and just like that, any opportunity that Laurel had to help her professor is lost.

Now that we know #WhoKilledWes, TVLine hopped on the phone with Karla Souza to discuss the episode’s major revelations — but first, a few other events of note from the two-hour finale:

* When Oliver hacks A.D.A. Atwood’s Wi-Fi, he discovers a blocked number that Atwood both dialed and received calls from on the night that Wes died (and the day his body was moved). Despite protests from his peers, Asher dials the mystery number… and a burner phone in Denver’s desk drawer begins to ring.

Realizing that the D.A.’s office has been framing her all along, Annalise comes up with a way out of her season-long legal bind: She’ll present Denver with a voicemail that Wes left on her phone the night of the fire, seemingly incriminating him for the deaths of both Sam and Rebecca. If Denver brings that voicemail to the judge in Annalise’s case, with a new theory that Wes actually killed himself due to intense guilt, then Annalise and Frank will go free, and the whole investigation can be called off. If not? Well, Annalise is ready for a fight. (Naturally, Denver chooses the former option, because no one in their right mind actually wants to go to head-to-head with Annalise in a courtroom.)

* A rare moment of happy news: Asher and Michaela love each other! And Oliver proposes to Connor! (But doesn’t get an answer! Yet!)

* In the finale’s closing scene, Annalise explains to her Alcoholics Anonymous group the bond she had with Wes, and how she tried to look after him during his time at Middleton. But when she draws a parallel between Wes’ death and the death of her own infant son, Annalise breaks down over losing Wes: “He felt like my son… because he was my son,” she sobs. “He was my son. And he’s gone.”

Below, while you tear through a fresh box of Kleenex, Souza breaks down the finale’s most shocking moments — and the emotional arc that awaits Laurel in Season 4. 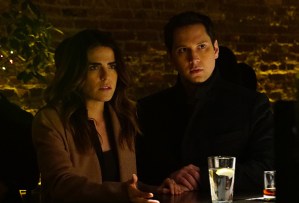 TVLINE | What was your reaction when you learned who was behind Wes’ death? Was Laurel’s dad someone you ever suspected?
I definitely never thought my dad would have involvement with killing the love of my life. And in the episode where I decided to sign my soul away to him, we now find out that I was actually signing a piece of paper that said I was never kidnapped, even though I was. The fact that he just keeps ruining my life is definitely something that will grow in Season 4. It was a shock to know my dad was involved in that, and I don’t even know how I’m going to deal, Laurel-wise, with that. It took us all by surprise.

TVLINE | Was there ever a part of you that suspected Laurel had killed Wes, given that she was in the house at the time?
Oh, God. [Laughs] No, I did not suspect that Laurel killed Wes. If that had been the case, Laurel would have been very psychotic, because she was actually in love with him. I knew that’s what I was playing.

TVLINE | The last time we saw Laurel meet with her dad, she was seeking information about Frank. What do you think his motives were to come back into her life at this juncture and kill Wes, of all people?
We don’t even know if the father intended to kill Wes specifically. Who knows who he thought was going to be in the house? He did blow up Annalise’s house, and we don’t know if Wes was supposed to be there in the first place. Whether Dominic was intending to kill Wes — he’s supposed to be a close family friend, so that’s going to be a jarring moment of realization for Laurel. And [showrunner] Pete [Nowalk] is really bringing it back [to the early seasons]. In Season 1, I had a moment with my family at the dinner table where I told them about Annalise and how dark all the things that were happening in my life were. I’m not surprised if my dad had someone investigate what was going on and find out about all the murders, and then decided to save me in his own way.

TVLINE | Have you spoken with [showrunner] Pete [Nowalk] about Laurel’s emotional trajectory in Season 4 at all? Even at the end of this finale, she didn’t really have closure about Wes’ death.
We’ve talked a lot about it, especially the pregnancy. She’s still going through grief while being pregnant, and she has a big decision to make. And now, she has the fact that she committed perjury — or, at least, that’s what people are making it out to be. Her world is crumbling in, but I do think there’s a lot of fight left in Laurel. She’s going to want to come to the end of avenging Wes’ death and finding out what really happened. We’re definitely going to dive into Laurel’s family in Season 4.

TVLINE | Speaking of the pregnancy, we saw Laurel discuss options with her doctor in this episode. How do you predict she’ll move forward with the decision to keep the baby or have an abortion?
Personally — and this is just Karla talking — I want Laurel to keep the baby. It’s all she has left of Wes and that love of her life. It would be very interesting to see what it’s like to have a baby while at law school. She has the financial means. Her family can definitely help in that respect. There’s always options; she could give it up for adoption. But I would definitely like to see us touching upon what it would mean for a law student to be pregnant and to make that decision — what the effects, psychologically, of being pregnant in school might be. That would be a very interesting storyline.

TVLINE | Before Dominic approached Laurel on the street, she seemed dead-set on using that gun in her purse on Charles Mahoney. Would she have killed him, given the opportunity?
I don’t think that was… [Sighs] You know what? I actually do. She was so hyped up. Perhaps, if they had gotten into an altercation, she maybe would have done something that she would have regretted afterward. But she really just wanted to confront him and get the truth [in that moment]. She’s thinking, “All is lost. All I want is to be able to know what happened to Wes.” But then when Dominic intercepts her, she’s relieved in a way, because outside on the street is probably not the best way to confront a man with a gun. [Laughs]

That’s a wrap, Murder fans! What did you think of the season finale? Grade it in our poll, then drop a comment below with your reactions.