Despite the joyous return of Drag Race legend Stacy Layne Matthews, Friday’s All Stars was a surprisingly emotional affair, beginning and ending with a room full of crying queens.

Trinity Taylor was the first to shed a tear, visibly rattled after sending Jasmine Masters packing just moments earlier. “It isn’t easy,” she told the other girls, urging them to prepare themselves for some difficult choices ahead. Additional waterworks were provided by Monique Heart, last week’s runner-up, who proclaimed that she would have saved Farrah as an act of grace, something she wishes she’d been shown in Season 10.

We got a brief reprieve from the drama when Valentina had the girls judge her bare butt (for the record, Latrice Royale saw “no ass at all”), but then it was back to battling with a musical maxi challenge. Seeking performers for her new supergroup, RuPaul split the queens into teams of two — Monique chose Monet X Change, Naomi Smalls and Farrah Moan, while Trinity picked Valentina, Latrice and Manila Luzon, plus got stuck with Gia Gunn — to write, record and perform new vocals for two original songs.

The teams’ recording sessions reinforced our initial perceptions of the queens, from Gia being less talented than everybody else to Monique writing a bigger check than she can cash. (I really do love Monique, but Monet hit the nail on the head when she said, “Her thoughts are way more grand than her execution is.”) We were also treated to a few surprises, like Farrah and Valentina both crushing their vocals — though I probably shouldn’t be too surprised by Valentina’s pipes, considering she’s co-starring in Rent Live next month. 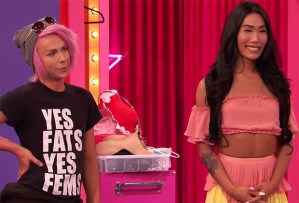 This week’s challenge also illuminated Gia’s rocky relationship with Farrah. According to Gia, she considered Farrah a “close friend” until recently, though it kind of sounds like she’s making a big deal out of nothing. You know what, I’ll just let her tell the story in her own words: “She tried to go about patching up a relationship between me and another person in an inappropriate way. And while I’m at work, they showed up drunk. So I kind of let her have it. … I texted her, and she just didn’t respond to me.”

Like I said, nothing. (Or as Trinity called it, “high school bulls–t.”) And the cherry on top of this nonsense sundae was Gia saying, “I just don’t want our drama to be a distraction for me during this competition.” (Question for the group: How can you claim to hate drama while simultaneously being the biggest source of drama in the workroom? It boggles the mind.)

But Gia officially cemented herself as the villain of the season when she approached Farrah before the main event, saying, “Do your makeup and get ready, sweetie. Because according to your team, you’re the weakest link.” (For the record, when Gia asked Farrah’s team what they thought about her, Monique’s exact response was “She’s doing it.” No one actually said she was the weakest link, even if she was.) Fortunately, Farrah was ready with the perfect response, pointing out that Gia’s pot stirring merely highlights her own insecurities. (“Some of us don’t have to force storylines to get air time.” Burn.)

In terms of the actual performances, neither “Funk It Up” nor “Everybody Say Love” was anything to write home about. Fine at best, “meh” at worst, they both just… happened. If forced at gunpoint to choose one over the other, I guess I would say that “Funk It Up,” while wholly unmemorable, was at least more cohesive than “Everybody Say Love.” Still, neither wowed me.

Fortunately, this week’s runway challenge more than made up for that musical snooze fest. For the most part, the queens turned it out, giving us several memorable looks. My personal favorites included Manila’s “silver fox” ensemble (“I’m an old bitch!”), Monique’s stunning blue number (with a sexy reveal!) and Valentina’s charming “Mexican in Paris” vibe. As for everybody’s least-favorite villain, Gia claimed to be serving us “cherry pie on a platter,” but all I saw was a Basic Barbie. 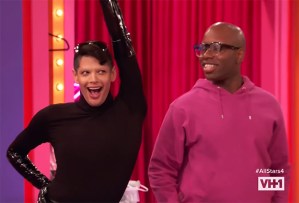 This week’s top two, Valentina and Monet, came as no surprise, nor did Farrah’s return to the bottom. That’s just where she lives now. But I’ll say this: I wasn’t expecting Monique to end up in the other bottom slot. Forgetting her wonky Aaliyah jacket for a minute, her runway reveal was impressive. Even Trinity acknowledged that Gia should have been in Monique’s place “for her attitude” alone, then said what everyone else was thinking: “It’s time for her to go.”

Sadly, Gia did not go this week. But she did try to ensure Farrah’s elimination by interrupting her brief chat with Monet, sabotaging her one chance to plead her case. “My intentions were not to throw you off or to throw your group off,” Gia said, as if a single girl in that room was buying any of her crap.

To be fair, though, I also have to call Farrah out for her own emotionally manipulative behavior. Telling Valentina, a friend with whom she recently patched things up, that getting eliminated would be “heartbreaking” was a little much. And saying that “it would take a really long time to get over it” was a lot much.

I’m sure a part of Valentina wishes she didn’t win this week’s lip sync battle, if only to avoid having to make a difficult decision, but fate had other plans for her. Big, redemptive plans! After all, with the shame of her infamous lip sync fail — she was eliminated in Season 9 for not knowing the lyrics to Ariana Grande’s “Greedy” — still hanging over her, how could Valentina resist a golden opportunity to clear her name? The fact that it was another Grande jam (“Into You”) only sweetened the deal. And although Monet came correct, Valentina put her life into that lip sync, and she deserved her win.

“Confidently, but with a broken heart,” Valentina ultimately chose to send Farrah home. Did Valentina make the right decision? And does Gia need to go next? Cast your vote in our poll below, then drop a comment with more of your thoughts.